Savills has reported “record results” for 2014, with better market conditions aiding a return to profitability.

International expansion helped drive Savills' pre-tax profit up by 34 per cent to £104.3m in 2014, compared with £75.2m the year before.
During the 12 months to 31 December, revenue for the London-listed property firm revenue was £1,114m, driven by a record revenue in the UK and improved market conditions in continental Europe.
The results are better than analysts expected – earlier this year, Numis, one of the company's house brokers, set its 2014 profit estimate at £99m.
The company also confirmed today that it is taking over German investment management firm SEB Asset Management for €21.5m (£15.6m). It will be combined with Cordea Savills, its existing investment management operations, to create Savills Investment Management. SEB is based in Frankfurt and Singapore, and has around €10bn (£7.2bn) worth of real estate assets globally.
Last year SEB's pre-tax profit hit €8.1m (£5.8m), and Savills believes the enlarged group will enable it to broaden its offering to both international and domestic real estate investors.

The company's revenue and profits exceeded forecasts in December, following chancellor George Osborne's rise in stamp duty for properties priced over £937,000. This caused Savills to upgrade its profit expectations for the full year, since many people rushed to push their transactions through before the new rules came into effect.
“The rise in Stamp Duty on high value UK residential transactions which caused a short-term increase in trading volumes,” the property firm said at the time. Shares soared following the news and have been steadily going up since then. 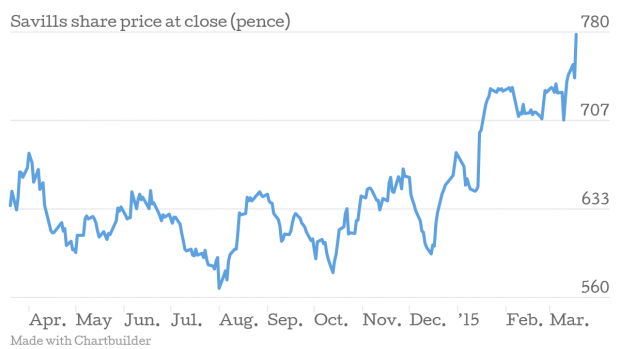 International expansion in the US also helped Savills last year – In June it completed the acquisition of US independent commercial real estate services firm Studley, which specialises in tenant representation.
However, the company remains “cautious” about 2015, despite a strong start to the year so far. “We retain a cautious view on the timing of the recovery in the Hong Kong commercial market and expect the UK residential market to remain subdued as a result of uncertainty around the General Election,” it said in a statement.

Our acquisition of Studley has performed strongly and has transformed our US capability, providing a significant platform to grow our operations under the new 'Savills Studley' brand. In Asia, the expected lower transaction volumes in Hong Kong, mainland China and Singapore were more than offset by strong performances across other regions. We achieved record revenues in the UK and our European operations also returned to profitability.

Savills is heading in a good direction at the moment, but it is well aware of difficulties that could hinder its progress in the year ahead.