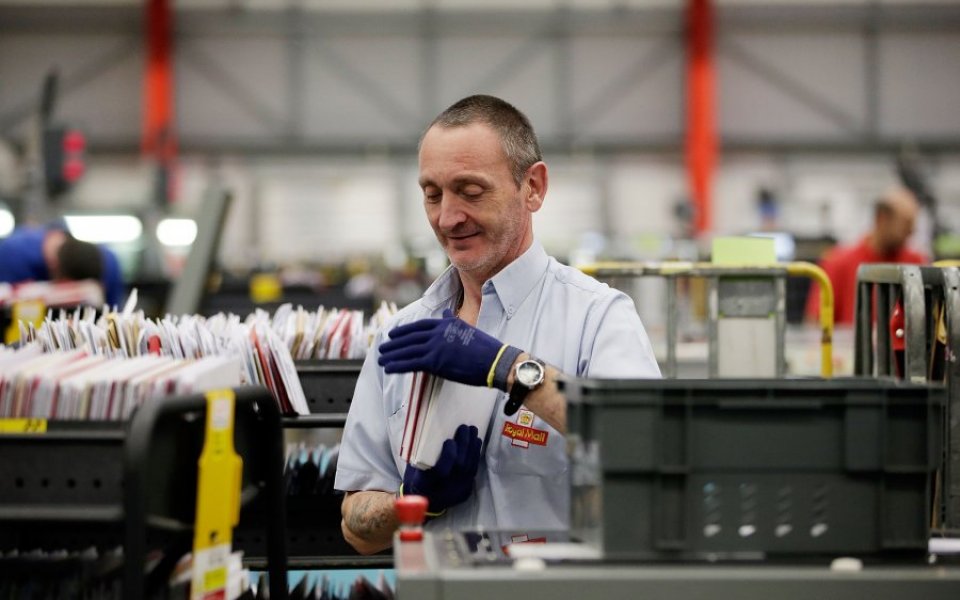 Shares in Royal Mail jumped four per cent to 472.4p after its first-half results showed it's making headway as it accelerated its cost cutting programme and says the outlook for letters and parcels markets remains unchanged.

Royal Mail reported revenue of £4.4bn for the half year ended 27 September, two per cent down from the £4.5bn for the same period last year.

Reported profit before tax was down further, at £116m, down 31 per cent from the £167m reported last year.

Meanwhile, reported earnings per share came in at 11.4p, down from 12.5p a year ago.

However, interim dividend per share increased to 7p, from 6.7p last year.

Royal Mail reported flat revenues compared with last year, in what it calls a "competitive trading environment", and thinks the outlook over the medium and short term remains unchanged, but performance in the second half will be dependent on the "important" Christmas period.

Last month the government sold off its final stake in Royal Mail, after Ofcom revealed the scope of its review of regulation for the business in July.

Responding to the Ofcom review, Royal Mail said the regulatory environment "must allow us to be innovative and competitive" in order to sustain the universal service.

Read more: Leaving the public out of the Royal Mail sale was bad politics

The cost savings programme, which has accelerated, and a better-than-anticipated performance in its general logistics systems (GLS), has led to "resilient performance", the company added.

It added the programme should also result in operating costs UKPIL, its international letters and parcels business, being reduced by at least one per cent for the full year.

But aside from the regulatory gaze, the company is also being challenged by declining letter volumes, which has in the past caused it to focus on its parcels business.

Not one to miss an opportunity to complain about competition, though, it took the chance to point out that: "As a result of Amazon's roll-out of its own delivery network we estimate that volume growth in our UK addressable parcel market has, on average, been reduced to around one-two per cent per annum in the short term."

We delivered parcel volume and revenue growth in the UK, which continues to be a challenging market. Addressed letter volume decline was at the better end of our forecast range. We are driving through a range of product innovations and service improvements at pace, as well as targeting new areas of growth and enhancing our offering.

As in previous years, the full year outcome will be dependent on our important Christmas period, for which we have extensive preparations in place.