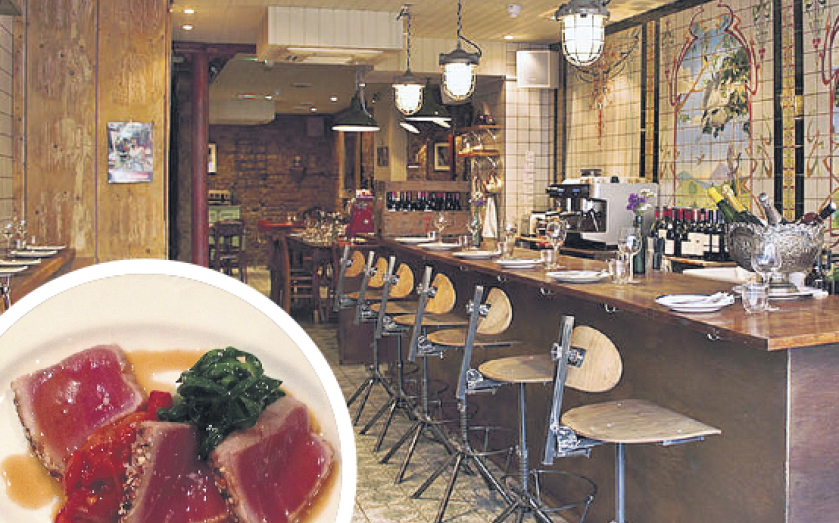 There's a little cinema in Soho where journalists go to see movies for free before they’re released. It’s one of the perks of the job and it fills the time nicely between eaves-dropping on your voicemails and pestering the recently bereaved. It’s on the same street as The Breakfast Club, where people – tourists and locals alike – routinely queue around the block to eat over-priced eggs, which has always struck me as a singularly poor use of both time and money. The more astute among you, however, might have noticed an unassuming little restaurant across the road, with pretty tiles and sash windows and raggedy tables. It gives the impression of having always been there, although a few weeks ago I'm sure it was an off-licence or a nail bar or a sex shop. “This place looks like a winner,” I thought. “I must eat here and relay my experience to the readers of City A.M. because this is, after all, my job.”

It’s called Blanchette and I was quietly confident I’d be the first person to tell you about it, which gives me a fuzzy feeling inside. But Google informs me that, actually, every food writer in the universe has already been, and moreover, they all loved it. I’m probably the last person to have stumbled across it, the equivalent of that Japanese bloke who hid in a forest for 30 years and didn’t realise the Second World War was over. Even your nan's probably heard about Blanchette by now. So I made other plans and forgot about it until a few days ago, when I broke my rule of never attending the opening of any bars/restaurants/clubs/municipal buildings unless my life depends upon it, especially if that place is in Soho, because it’s guaranteed to be filled with loud people in loud clothes standing around being loud while I wish I were anywhere, literally anywhere, else. But I’d been assured it was going to be a big deal and El Pye was keen to get stuck into some free champagne. We lasted about an hour, until Jonathan Ross turned up, which is as good an indicator as any that a party is over.

And where better to stumble at half-ten on a balmy Wednesday than that nice little French place that everyone’s been slavering over. So I'm afraid you’re going to have to read about it again. I have space to fill. It would look silly if this page were left blank. Questions would be asked.

I’ve no doubt you already know about the homely interior with the exposed brickwork and the artfully disheveled furniture and the art nouveau tiles depicting charming bucolic scenes, not to mention the chintzy French details like the Gérard Depardieu cookbook and the Pierre Perret LP. And you’re probably sick to death of hearing about the adorable staff – most of them actually French – who seem to genuinely enjoy telling you what the specials are.

It reminds me a little of Casse-Croûte on Bermondsey Street, in that it manages to pull off an overwhelming Frenchness without appearing to make any effort at all. It’s what the Parisians might call chouette, which means “owl” and also “cool” (I don't know why; I guess owls are kind of cool).

The menu – only two pages long, always a good sign – is divided into “snacks” (frogs’ legs, foie gras etc.), “charcuterie”, “cheese” and small plates of fish, meat and vegetables. Our waitress – let’s call her Amélie, she looked like an Amélie – explained that the restaurant is based on a “sharing concept” (quelle surprise) and recommended half of the dishes on the menu. I’m glad, because there is nothing that comes out of that kitchen I wouldn’t eat.

First up was asparagus with cervelle de canut, which means “silk worker’s brain”, a chilled cheese spread flavoured with shallots, olive oil and herbs – it was both seasonally light and satisfyingly wholesome.

The peppered tuna – served with tenderstem broccoli, sautéed tomatoes and peppers – was simple but effective, the kind of dish it’s impossible to object to. Steak tartare, although commendably summery – packed, as you might have already heard, with cucumber and salty capers – was just okay, but the beef shin “chou farci” (wrapped in cabbage) is unequivocally delicious.

Beef rump – served so rare it still had a pulse, of course; they don't even bother to ask if you might want to ruin it by cooking it any other way – with onion, green beans and a rouille dip (olive oil with garlic, saffron and chili and breadcrumbs) seemed like it was going to be the pick of a good bunch until the braised lamb shoulder arrived. It was a hefty piece of meat topped with roasted garlic and swimming in a moat of frankly magnificent sweet gravy.

All of this and a carafe of very nice red wine – I can't remember which one, I was quite drunk by this point – came to £80, including the tip, which is outrageously good value. You’re basically stealing from them just by eating there. Even the fact that Amélie – beautiful Amélie – kept us waiting for a full 15 minutes after we’d asked for the bill didn’t put a dent in my mood. Blanchette is, hands down, the best new place to eat in Soho. But then you already knew that, didn’t you.