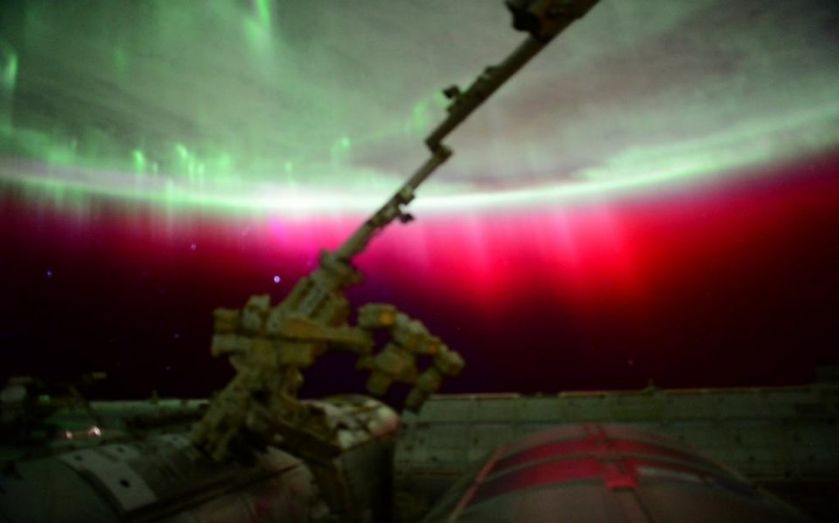 The American astronaut Scott Kelly posted these powerful images of the red aurora – or "red curtain" – on Twitter today.

Day 87. The red curtain of an #aurora closes on another day. Good night from @space_station! #YearInSpace pic.twitter.com/NUyJkGKy9y

Aurora borealis is caused by cosmic rays, solar wind magnetospheric plasma interacting with the upper atmosphere. Its colour varies depending on the gases in the atmosphere, although Kelly's image is more red than is usually seen.

In 2012, NASA and the Russian Federal Space Agency (Roscosmos), and international partners chose two experienced astronauts – Kelly and Russian Mikhail Korniyenko – for a one-year mission aboard the International Space Station.

The mission, which includes collecting scientific data, will provide information to help future space exploration of our solar system, including missions around the moon, an asteroid and even Mars.

Companions for a year, the two astronauts hope to uncover further secrets of the cosmos

In particular, they want to understand better how the human body reacts to the harsh environment of space, informing current assessments of crew performance and health. This will help to determine countermeasures to reduce the risk of solar exploration in the future.

And of course, they want to keep the world in wonderment through their photos.

The two astronauts, Kelly and Russian, took off from Kazakhstan in March and will land back on earth in spring 2016.