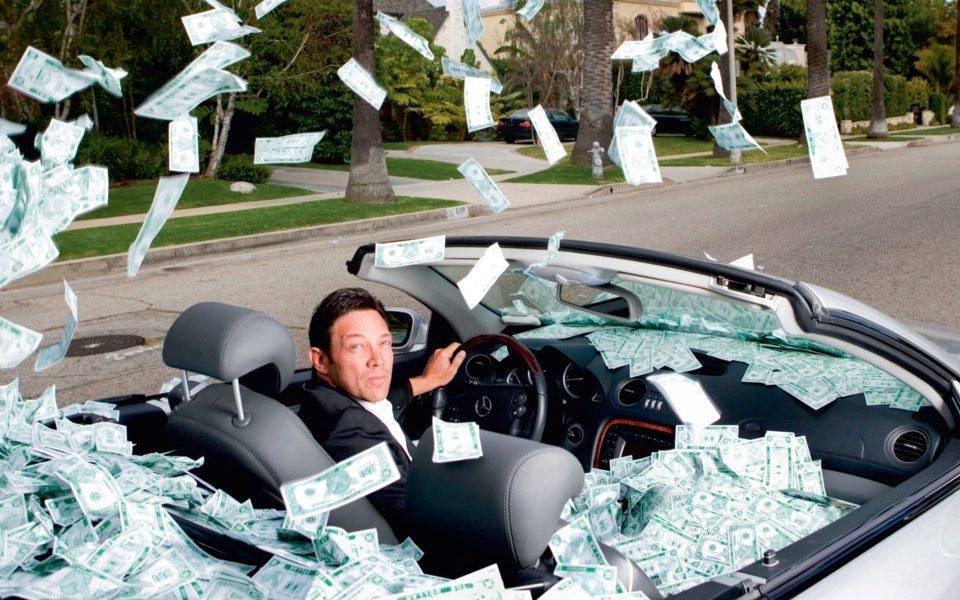 The most remarkable thing about Jordan Belfort, the self-styled Wolf of Wall Street, is not his once-prodigious drug consumption or the Bacchanalian excess of his infamous company Stratton Oakmont – it’s his sheer, bloody-minded staying power.

In his 56 years he’s experienced bankruptcy, drug addiction and incarceration, losing more money than most people could earn in several lifetimes, and yet he sits before me a picture of manicured good-health, all Hollywood tan and 1,000 watt smile.

Belfort’s story is at once tawdry and outrageous. In it he plays the protagonist, the villain and the fool. His meat-distribution business went bankrupt when he was 25; he became a millionaire stocks trader by age 30; he plead guilty to securities fraud and money laundering before his 40th birthday. In the years leading up to his stretch in the slammer, Stratton Oakmont made a fortune flogging worthless stocks to gullible investors.

His team, many of whom went from menial jobs to overnight millionaires, celebrated by taking monstrous quantities of drugs, ordering prostitutes to the office and organising niche entertainments such as dwarf tossing competitions. Then the FBI descended; Belfort was eventually sentenced to four years, of which he served 22 months, after agreeing to inform on his corrupt associates.

For most people, that would have been the final chapter. What use is a salesman who everybody knows is a crook? But Belfort started writing his memoirs in prison – apparently on the advice of his cellmate Tommy Chong of Cheech and Chong fame – becoming a published author and the inspiration for Martin Scorcese’s epic movie.

Now he plies his trade as a motivational speaker and online “educator”, charging aspirational sales-people for access to his “foolproof system for closing”, which will set you back anything from $9.99 a month for a Patreon subscription to $999 for his “Straight Line Marketing” video course.

He leans heavily into the Wolf of Wall Street brand – his website even features a  testimonial by Leonardo DiCaprio; it is not, I must admit, the actor’s most convincing performance. Belfort’s side-hustles include a business selling Phenomenal, a “revolutionary pheromone fragrance” that promises to “enhance your personal magnetism and intensify the power of attraction by subliminal persuasion.”

His latest venture is an unlikely foray into immersive theatre – a medium he says he’d never heard of until he was asked for the rights to his book – produced by the team behind The Great Gatsby, London’s longest-running immersive play. The production features a cast of 19 actors performing 25 hours of material during each 2.5 hour show.

We meet at London’s BAFTA club, Belfort wearing a blue sports jacket, defiantly untrendy boot-cut jeans and trainers. On his wrist is a Hublot the size of my fist. He speaks with the rapid-fire staccato of a gatling gun, cramming an astonishing number of words into each sentence. He has a habit of punctuating his points with the same dainty ‘chef’s kiss’ gesture beloved of Donald Trump, a man for whom he admits to “grudgingly” voting for in the 2016 election.

“America is so incredibly corrupt it’s mind-boggling,” he says in his distinctive Bronx accent. Isn’t that a little rich coming from a convicted felon? “Who would know better than me? I’m not saying I was never corrupt. I was. I know both sides.”

This is where the whole Wolf of Wall Street phenomena becomes a little problematic. Former assistant US attorney Joel Cohen, who brought the case against Belfort, has since described him as an “unrepentant character” who he says is far less sympathetic in real life than he is on-screen. Is it even possible to tell Belfort’s story without turning him into a twisted anti-hero?

“There’s a version of this show that could be morally bankrupt,” admits The Wolf of Wall Street – The Immersive Experience director Alexander Wright. “But that’s not the tale we’re trying to tell. It’s a complex story about a complex time in history, seen from a complex place in 2019. This isn’t a production condoning his behaviour.”

I ask Belfort if he worries about glamourising his past. “It is glamorous,” he replies. “It just is. But people want the light side of it, not the dark side. They want to get rich and dabble in drugs. They want to experience beautiful women or beautiful men, and there’s nothing wrong with that. If you go to the movies and come out thinking ‘I want to do drugs all day long and lose people a lot of money and crash cars and bang women while my wife is at home – go and see a psychologist. Nobody with half a brain wants to be a drug addict and implode and go to jail.”

Does part of him miss those days? “Look, I’m 56, that happened when I was 26 – if I tried to do those things now, I’d probably die. I’ve also been sober for many years. My life has been a journey – you learn. My 26-year-old self was the start of a journey and if I were still that same person today I’d be a total loser, like the high school football star who’s still acting like he’s a quarterback aged 42. I try to evolve and grow and be my best self each day. I don’t look back.”

So if he had his time again, what would he change? “The actions I took that hurt other human beings,” he says in a manner that sounds rehearsed. “The people who lost money – I’d love to change that but I can’t.”

From his vantage point as a man who was once very much part of the problem rather than part of the solution, he says he can see choppy waters ahead for the finance industry. “Things are cyclical. After 2008 things got better, but they are starting to erode again. There will be another scandal in 5-10 years, for sure. Then you’ll see another huge crackdown and so on and so on… The cracks are already showing. It’s pretty sad but it’s human nature. I hope this time it doesn’t go so far.”

He’s less pessimistic about Britain’s chances post-Brexit: “I know as much as I know anything that Britain will be okay. It won’t matter. There’s a reason Britain ruled the world for so long. Sure there will be a little bit of pain, and opportunities will shift to different parts of the economy but it will be fine. There’s nothing wrong with nationalism. It isn’t racist. We should all love our country – you shouldn’t hurt others but your own country should come first.”

Belfort strikes me as a natural-born optimist, a salesman who believes his own pitch, the kind of person who, even during his darkest days, would have expected things to work out. Is that right? “Naaaaah, I never even thought I’d finish the book. Then Leo bought it. Then he actually made it. Then the movie became what it did…”

So was it all just dumb luck? “The most important takeaway is that wherever you are in your life, you can always come back from failure, it’s never too late to take a step in a new direction, but you have to work hard and take the lumps and take the critics. I got it right on my third try. I made mistakes and I paid for them, I learned and I grew – the day you stop learning you die. It’s a very circuitous version of the American Dream.”

The American Dream feels like the vital ingredient in Belfort’s story, the one thing that separates him from charismatic con-men across the world. If a Brit defrauded the English middle classes of their pension funds, that would be the end of them. But Belfort articulates something in the American psyche that foreigners struggle to fully comprehend. He’s a chancer, hustler, a felon – but he’s also a salesman, and to many, that trumps the rest. It’s what makes his story so compelling: it’s Glengarry Glen Ross with quaaludes.

He bounces out of the room clutching his can of Red Bull, a whirlwind of handshakes and teeth. He’s doing a talk in London this evening and flies out to Venice in the morning. His next big plan is a Broadway musical based on his life. Whether it’s the American Dream or a recurring nightmare, you haven’t seen the last of Jordan Belfort.

• To book tickets for The Wolf of Wall Street – The Immersive Experience go to immersivewolf.com