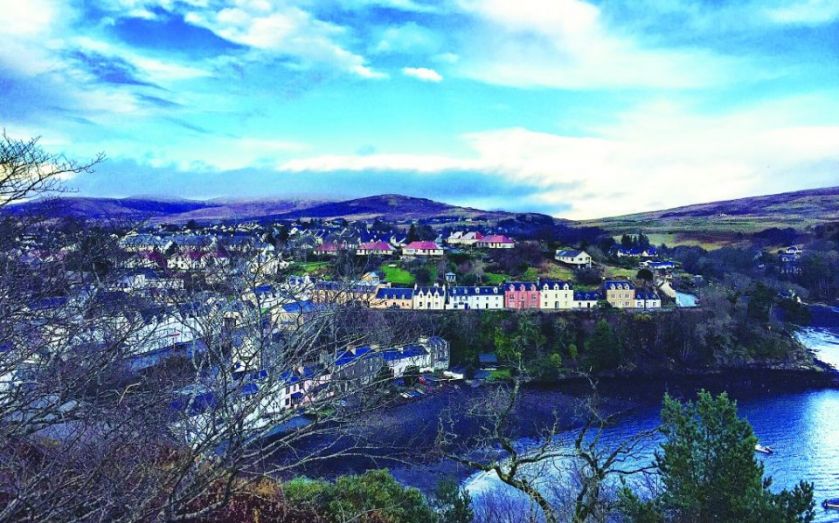 The island off the west coast of Scotland has a rugged charm during the colder months – and the food is first class.

My heart is yearning to thee, O Skye! Dearest of Islands! There first the sunshine gladdened my eye, On the sea sparkling”.
So wrote Scottish poet Alexander Nicolson about the largest and most northerly island in the Inner Hebrides, and his sentiments are echoed by dozens of writers beguiled by its dramatic coastline and imposing mountains.
But what about visiting when there’s no sunshine to gladden the eye? What about right now, in the depths of winter, when the west coast of Scotland is whipped by torrential rain, hail and storms that city folk only usually see in the movies? 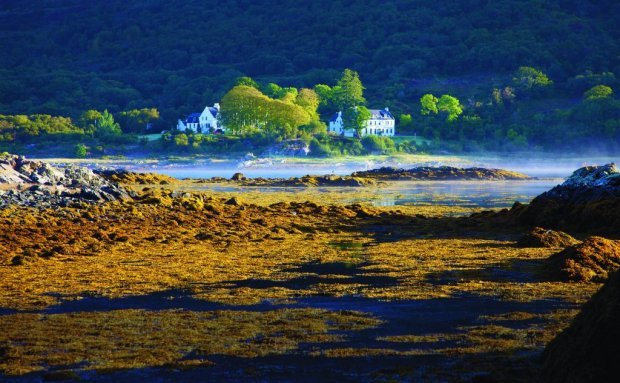 Admittedly Skye is a different beast in the winter. There’s hardly anyone there, for a start. It may be Scotland’s number two tourist destination after Edinburgh (and, by the way, you’d be better off visiting Glasgow than the capital), but during off-season, numbers drop off sharply. On the plus side, the feeling of isolation lends itself well to the rugged landscape; seeing ice-capped mountains rising out of the fog, nary a soul for miles around, is little short of spectacular. The downside is the inevitable knock-on effect on the island’s businesses – foodies will be disappointed to hear that The Three Chimneys restaurant, for instance, is only open from mid-March until mid-November.
Outdoor activities like the famous Fairy Pools are touch and go – too much rain and you won’t get anywhere near them; if you do make it, only a lunatic would consider swimming at this time of year. Even trekking up mountains like perennial favourite Old Man of Storr, with its fang-like pinnacles rising out of the ground like something out of The Lord of the Rings, isn’t a good idea in the midst of winter.

The Old Man of Storr

While I’d happily hole up on the island for the entire summer, the colder months are better suited to a shorter break. Of course, to drive there from London would take around 13 hours, so that’s not an option for a long-weekend. A new flight route from London City Airport to Inverness, though, opens up the west coast of Scotland for a quick getaway. You can leave Bank station at 6pm and be on Flybe’s 7.35pm flight without breaking a sweat. From there it’s a two and a half hour drive to Skye, so you’ll probably want to check into an Inverness B&B for the night and drive across early the next morning (you can hire a car from the airport through the usual vendors).
To hedge your bets against the weather, I recommend planning to spend a lot of time indoors. And there can be few better places to relax by a crackling log fire than Kinloch Lodge (which has the added bonus of being very affordable at this time of year). Located around 20 minutes south of the Skye bridge (you can drive right on to the island, no need for a ferry), it sits at the foot of Kinloch Hill with a sea view to the mainland. If the weather holds, there are plenty of walks through the woodland and around the shore.

It’s the ancestral home of the Macdonald clan, the current owners being Godfrey and Claire Macdonald, the latter of whom you may recognise from her cook books. Portraits of the family through the ages adorn the hotel, peering down at you from the dining room and greeting you at the top of the stairs.
Given its gastronomically-inclined owner, it’s little surprise that Kinloch Lodge has a big emphasis on food. The kitchen is run by Marcello Tully, who is kind of a big deal; he worked under Albert Roux at Home Roux and has also put in stints at Le Gavroche, Rouxl Britannia and La Boucherie Lamartine. His Michelin-starred restaurant serves Scottish produce prepared French-style, with five and seven course menus that are perfect for those who don’t like making decisions. And the food is very good indeed – far better than the majority of restaurants I’ve reviewed in London over the last couple of years.
Scallops only hours from the sea are served with wonderfully fresh hake; the local venison and butternut squash is first class; lightly curried pea soup is sweet enough to be a dessert and dessert is sweet enough to send you to a blissful early grave. Everything is immaculately presented; nothing would look out of place in a fine dining restaurant in Mayfair.
If you want to find out how it’s done, you can book yourself on a cookery course with Tully. The kitchen at Kinloch is surprisingly spacious, especially at this time of year when there are fewer chefs cluttering the place up. I started making salmon mousse (the trick is to add more cream than you’d ever imagine doing at home) with spinach pancakes, which was served as canapes later. This is both rewarding and rather clever; nobody’s going to complain about food they’ve cooked themselves. Next we made the aforementioned pea soup, finishing off with a crab and scallop mousse – forming the perfect heaped servings using two spoons was impossible to master.

A view to the mainland near Sconser, Skye (Photo: Laura Pye)

Word of the burgeoning foodie culture on Skye is clearly getting around – in May this year, rotund French actor Gérard Depardieu visited the island for a spot of fishing, deer hunting and some haggis. Rumour has it he enjoyed the local booze so much that it was a factor in his cancelling a talk at the Edinburgh Film Festival the following day.
You don’t just come here for the food, though – the drive across the island to Portree is incredible, taking in the aforementioned Old Man of Storr and ending up in the picturesque town of Portree, with its pastel-painted sea-front houses. You get a great view from a folly a short walk from the harbour, near to where they host the Highland Games. Off-season Portree doesn’t seem so much sleepy as asleep – I didn’t spot another tourist while I was there. It’s the kind of place that makes you dream flat-sitting a B&B for the winter and writing a novel (a bit like Jack Torrence from the Shining, come to think of it – all work and no play makes Steve a dull boy). Don’t expect an easy job finding somewhere to eat lunch, though.
One place that is open through the winter is the Canowindra “luxury B&B” a short drive from Portree. Canowindra is a recently built guesthouse with four beautiful rooms (and one beautiful boxer dog). It’s a world away from Kinloch, but equally pleasant in its own way – modern and airy, homely but refined. Dinner consisted of a hearty venison stew and a rum cake containing enough rum to knock out a sailor – perfect for warming the soul after a day in the brisk Skye winds.

That evening – “evening” starts at roughly 4pm – I sat in the lounge listening to the rain on the window, thinking that, unlikely as it sounds, Skye might be the perfect winter weekend break.
Kinloch Lodge (kinloch-lodge.co.uk, 01471 833 333) offers a winter rate (1 November 2014 to 31 March 2015, excluding Christmas and New Year) from £99 to £169 per person per night, including a five-course dinner and a hearty Scottish breakfast. They are offering a Christmas deal for three nights, including activities and Christmas dinner, from £600 per person.
Canowindra (canowindraskye.co.uk, 01478 613 640) offers a rate of £145 per night per room. Supper is from £22.50 per person for two courses.
Flybe flights from London City Airport to Inverness are from £33.66 one way.
What’s in a name?
The Vikings are thought to have christened the Scottish isle “Skye” by combining two Norse words, Ski (sky) and ey (island)