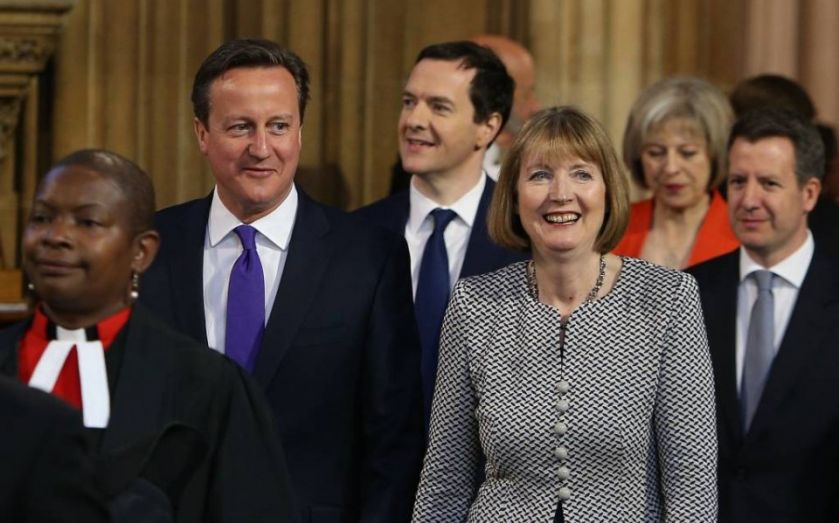 The Queen's Speech – the first full-Tory state opening of Parliament since 1996 – has come and gone. But what is the business community making of it all? Here are the best reactions so far.

On the tax lock:

Chas Roy-Chowdhury, head of tax at the Association of Chartered Certified Accountants says: “This is a policy aimed squarely at tax stability, but we also want to see this lock applied so that tax allowances and reliefs are not decreased, such as pensions tax relief.”
Jonathan Isaby, chief executive of the TaxPayers' Alliance, said: "While a touch on the gimmicky side, it offers some welcome protection for hard-pressed taxpayers. It is crucial, however, that the chancellor doesn't quietly hike other taxes, but rather finds spending reductions to ensure we are still moving towards the goal of a balanced budget."

Tom Elliott,  private clients partner at Crowe Clark Whitehill, said: "While holding the rates sounds like good news, there is still room to increase the tax take by restricting allowances (for example, higher rate tax relief on pension contributions).  Also, there is no guarantee on the rate of CGT or IHT – while there was a pre-election promise to increase the IHT threshold for ‘family homes’, no mention was made in the speech – perhaps there is more to come on 8 July?”

Simon Walker, director general of the Institute of Directors, said: “While IoD members are opposed to increases in the rates of VAT, income tax and National Insurance, we consider it imperative that the Government’s commitments do not prevent bold tax reforms to both simplify taxation and reduce the burden upon businesses and individuals. Ensuring that the UK tax system remains responsive to tax reforms introduced by our European and global competitors must be a government priority."

Mark Littlewood, director general at the Institute of Economic Affairs, said: "Today’s announcement saw constitutional matters overshadow the UK’s pressing economic challenges. While commitments to tax locks and deregulation are welcome, it is vital that the government redoubles its efforts on tackling the deficit and balancing the books. Regrettably, some of government’s proposals will see the role of the state further expanded into people’s lives."

On the EU referendum:

John Longworth, director general of the British Chambers of Commerce, said: “The government must pursue a reform agenda that gets the single market working properly for UK businesses trading in Europe; addresses what it means for us to be part of the union, but not part of the monetary union; creates safeguards for non-Eurozone countries in EU decision-making; and ensures that the EU adopts a relentlessly pro-business, pro-growth agenda that minimises regulatory burdens.
“A referendum should be held as soon as is practicable to minimise further business uncertainty.”
Walker said: "Now that the referendum on the UK’s membership of the European Union has been confirmed, the most important thing is that the Prime Minister gets on with the business of negotiating reform. The status quo is not an option for IoD members, who want reform in the way the EU works to give individual governments more control in managing their labour markets and economies."

On jobs and enterprise bills:

Andrew Leck, Head of Western Europe, ACCA, says: “The details of both bills will be essential for ensuring business has the means to invest and grow and that businesses large and small are able run workable apprenticeship schemes.
Chris Jones, chief executive of the City & Guilds Group, said: "Numbers don’t mean anything unless apprenticeships offer a quality teaching and learning experience for every apprentice. If reaching targets becomes more important than ensuring quality, apprenticeships could lose their credibility and the progress we’ve made so far will be undone. If we get the quality right, the numbers will come."
The IEA's Littlewood said: “Lowering the benefit cap is a step in the right direction but many of the gains will be offset by the need to pay for three million more apprenticeships. The government needs to be bolder still in the area of welfare reform, particularly in pushing ahead with a clear work requirement."

Leck says: “This Queen’s speech also deals with two areas which will no doubt define David Cameron’s legacy – Scotland and Europe. Both are set to receive a transfer of powers, in Scotland’s case given ‘devolution max’ is likely to result in a significant shift in power; Britain’s fiscal policy needs a commanding steer.”

Duncan Field, head of planning at global legal practice Norton Rose Fulbright, said: “I think it is to be welcomed in principle and is a sensible recognition of the role that cities play across the country as the drivers of jobs and housing; my initial concern is that to be effective devolved powers (including planning) will need to be exercised beyond each city’s administrative boundaries and into the surrounding area which it influences –  that requires a degree of consensus from surrounding local authorities which will be difficult to achieve in every case.”
Kirstie Donnelly, UK managing director of City & Guilds, said: "Giving cities greater control over skills and employment is a positive step forward that will better suit the needs of local job markets. Councils have a clearer picture of the skills and jobs that are in demand in their areas, and so are best-placed to make decisions that benefit local needs. [However] we would like to see the government go further and establish Local Enterprise Partnerships on a statutory basis to help bridge the gap between education and business."
The IoD's Walker said: "The biggest economic opportunity of this parliament comes in the Bill on devolution within England. Business leaders across the country stand ready to work with local authorities and mayors to take greater control of decision-making in areas including transport and planning in order to promote growth and employment."

Unite general secretary, Len McCluskey said: “Given the profound challenges facing this nation, it is staggering that a priority for this government is not to create decent jobs and offer a helping hand to insecure workers but to attack trade unions… We urge this government to think again.  People will not be fooled by claims to be the party of working people, if freedoms and democracy are swept away in a tide of repressive laws and showy PR.”
TPA's Isaby said: "The Government is right to limit the influence of a politically-motivated minority at the top of trade unions from holding the country to ransom for their own ends. Even after this legislation, there remain numerous safeguards protecting the right to strike, so this legislation is a reasonable and fair response to ensure taxpayers' lives are not disrupted by poorly supported strikes as they have been in the past."

Paul McFarlane, partner at Weightmans LLP, said: “Today’s announcement has drawn the battle lines between the unions and the new government and we could well be entering into a period of increased industrial unrest. Given Len McCluskey’s recent comments on this issue we may even see unlawful ‘wildcat’ strike action in response."

Paul Smith, chief executive of Haart Estate Agent, said: “The policy issue underlying these new rules is tackling illegal immigration into the UK – a laudable aim, but passing this task onto landlords, and inevitably letting agents acting in their best interests, is misplaced. Landlords and letting agents are not border control agents and adding another layer to the administration means agent fees will increase, as all checks and referencing are labour and time intensive. Ultimately the tenant pays the price.”
The IoD's Walker said: “We understand the Government must be responsive to public concerns on immigration, and responsible businesses will have no objections to crackdowns on illegal workers or employers who break the rules. But proposals to charge employers who employ migrants an additional levy will add further costs on top of visa fees.”
Tim Thomas, Head of Employment Policy at EEF, said: "Even the most proactive of employers will, at times, need to recruit specialist workers from outside the UK and Europe. Any future apprenticeship levy imposed on these employers, simply because they have recruited a worker from outside the EU, will be seen as punitive and risks alienating the same employers who already train UK apprentices. ”