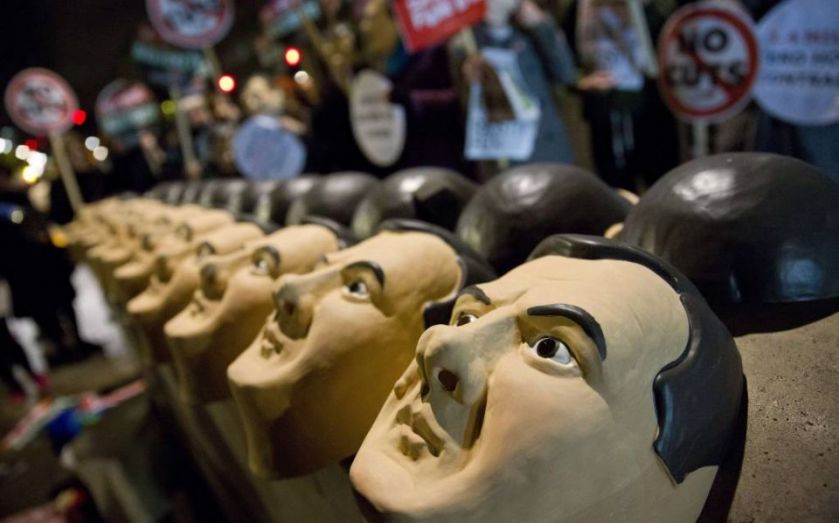 The Queen's Speech has come and gone but even after the debates in parliament this afternoon, Downing Street will still be a hive of activity.
An anti-austerity protest has been organised to coincide with the Queen's Speech, with campaigners targeting Downing Street shortly after the official state opening of parliament.
The People's Assembly Against Austerity estimates that thousands of people will descend on the area just outside Number 10 at 5:30pm Wednesday (May 27).
Speakers will include comedian and activist Shappi Khorsandi, Islington North MP Jeremy Corbyn and Green Party leader Natalie Bennett as well as various representatives from pressure groups and unions.
The 'End Austerity Now' demonstration will then move towards the Emmanuel Centre in Westminster for a rally that evening.
The People's Assembly Against Austerity was set up two years ago; original members included Tony Benn, Caroline Lucas, Len McCluskey and Bob Crow, as well as writers including Traiq Ali and John Pilger and filmmaker Ken Loach.
Its claims to “provide a national forum for anti-austerity views which, while increasingly popular, are barely represented in parliament”.
On its Facebook page, the group says: “We need to keep the pressure on people. This Government is on the loose and will try to move quickly to dismantle the things we hold dear as a nation.
“We need to protect the welfare state and show that we are a people that care for society as a whole. This Government obviously has no regard for our economic and social well-being. Two thirds of the country's economists say that austerity has already failed and is seriously damaging the economy.”
Of the protest, it adds: “Please come along and let them know that we have no intentions of accepting this oppressive, draconian lifestyle they are trying to impose.”
Update: Transport for London is warning that the demo could cause delays to motorists in the area.
https://twitter.com/TfLTrafficNews/status/603552441385254913