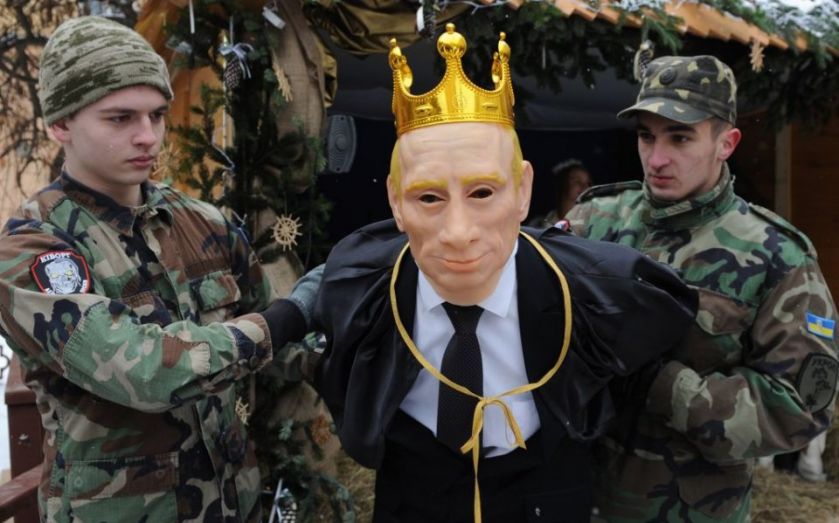 When we last left Vladimir Putin at the end of 2014, he was a cornered animal at bay, turning with teeth bared as the forces of the market relentlessly drew closer to him.

But ever the creative tactician, the Russian President is seeking to – not for the first time – dramatically change the facts on the ground regarding his stealth invasion of Ukraine. This past month, the Kremlin has been behind the ruination of the fragile Minsk ceasefire of September 2014. Now the Russian-backed rebels – aided by both Moscow’s military wherewithal as well as not-so-clandestine Russian troops on the ground – are on the offensive.

However, as I have written over the past year, Putin’s ultimate strategy – for all the customary Russian bluster – is essentially defensive in nature. His first preference would be to have Kiev as a prosperous and secure vassal state. Following the Maidan Revolution, that outcome is simply not on the cards.

But Putin’s next-best strategic outcome certainly is: to make such a mess of Ukraine that it miserably floats in the ether between the West and the Kremlin, too economically destitute and too ruined by war to emerge as a fully-fledged, successful Western ally. Given all that has happened, Putin is well on his way to achieving that nefarious goal.

Such a scorched-earth strategy – organically long a part of the Russian foreign policy tradition – would halt what the Kremlin sees as Nato’s inexorable expansion towards Russia following its victory in the Cold War. The Russian President will view himself as strategically successful if he can stop the West acquiring a successful grouping of allies sitting on the Kremlin’s doorstep.

Ultimately, the Russians are counting on two big things: the endemic nature of the euro crisis confirming Europe’s absolute decline, and the continued economic gormlessness of the present Ukrainian government. That is not a bad strategic wager to make. For a preoccupied and failing Europe – with catalyst Germany entirely focused on saving the euro – will hardly leap to the rescue of a Ukrainian government which has yet to prove it is remotely capable of even beginning the onerous and necessary process of genuine economic reform.

As for the West, there remain signs of steel on both sides of the Atlantic. An exasperated Chancellor Merkel has steadied European nerves by making it clear that there are absolutely no Russian signs out there that call for a re-thinking of the substantial Western sanctions that even the Russians admit may cost their country $40bn this year. Likewise, President Obama says he is “deeply concerned” with what is going on, and that he will consider all measures “short of military confrontation”. And here we come to the heart of the matter.

Like a first-rate magician, Putin hopes that by showily changing the military focus of the crisis, the West will allow his misdirection to distract it from what is really going on: the slow death of the Russian economy. For while the surface military facts on the ground have recently altered, the underlying and determinative economic realities of the situation have not.

Russia remains an economic basket case, with inflation galloping at 11.4 per cent in December 2014. The Russian Central Bank has warned that the economy may shrink by a staggering 4.7 per cent in 2015 if the tumbling oil price settles near $60 a barrel; with Brent crude presently hovering at $48, they should be so lucky. The rouble, despite interest rates being hiked to an eye-watering 17 per cent (they have since been cut to 15 per cent), lost a further 17.5 per cent of its value in the first two weeks of 2015. However much Putin tap dances on the world stage, there is no getting away from the fact that – primarily due to the halving of the global price of oil over the last six months, but secondarily due to the surprisingly effective Western sanctions – Russia is on the economic ropes.

And now is the time for President Obama to finish the Kremlin off. To avoid blindsiding the Russians, which could force the grievously wounded bear to lash out (and that is in no one’s interests), the White House should privately warn the Russians that this is their last, best chance to commit to ending their destructive meddling in the internal affairs of their next-door neighbour… or else. The threat at the end of the warning would entail cutting Russia out of the SWIFT banking system, which on its own would simply devastate the Russian economy. For all the smoke and mirrors the Russian President is hiding behind, the country’s failing economy has proven to be its Achilles’ Heel. Now is the time for Obama to call the Kremlin’s bluff.