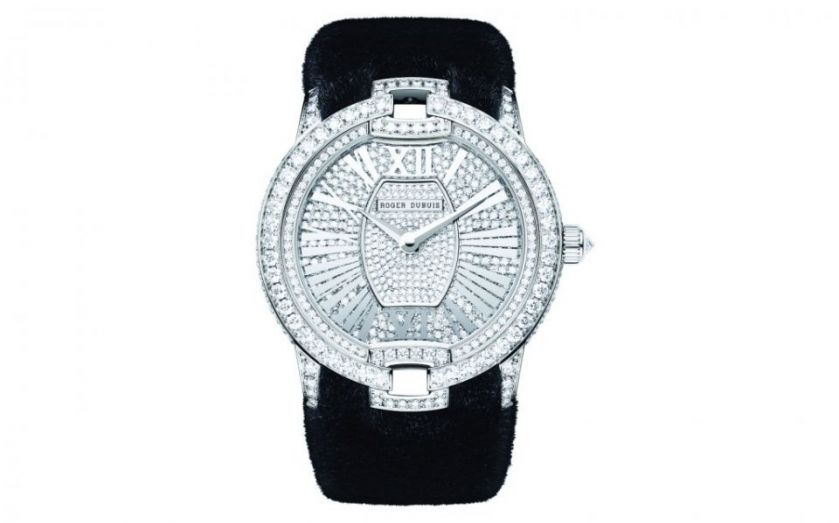 When it comes to women’s watches, straps aren’t usually top of a designer’s list of priorities. But despite all the attention the dial tends to get, it’s the strap that covers the larger proportion of your wrist. Thankfully, there are brands out there that do spend time on these means of attachment. Hermès is famously obsessive about its straps – its workshop in Switzerland demands “métier” status and its products are made with the same level of care and precision as any handbag bearing the Hermès stamp (in fact, you can even commission a strap to match your bag should you have the money or inclination). Dior is another notable exception – a couple of years ago it launched the Grand Soir with a strap made using haute couture techniques that even came with a hand-stitched couture label.

However, these were anomalies, bright flashes of colour in a world dominated by tasteful, muted tones.
Then, in typical fashion, Roger Dubuis decided to shake things up. It relaunched its Velvet collection and employed the services of some leading names in the worlds of fur, fashion and equestrianism. Designer Daniel Benjamin was drafted in to make a seriously strokeable mink strap; France’s oldest trimmings manufacturer Declerq Passementiers created one that looked as though it was encased in a fishnet stocking, and renowned saddle-makers Les Artisans Selliers made a strap resembling a corset. They were decadent but fun and moved the focus away from the dial.
Following in Roger Dubuis’ footsteps was Montblanc with its Boheme collection. Montblanc’s women’s watches have always erred on the side of caution (inspired by Princess Grace, the focus has always been on elegance over innovation), but this collection was something different, made for a woman more likely to wear a killer stiletto than a twinset. The straps come in vibrant, almost acid shades, with Montblanc encouraging its customers to mix and match colours. They were an integral part of the watch, not just a means of keeping it on the wrist.
The women’s watch industry seems to be opening up to the idea that watch design can be fun, and women’s watches are a space where creative impulses can be indulged. Bravo.
Laura McCreddie is editor of eveswatch.com.