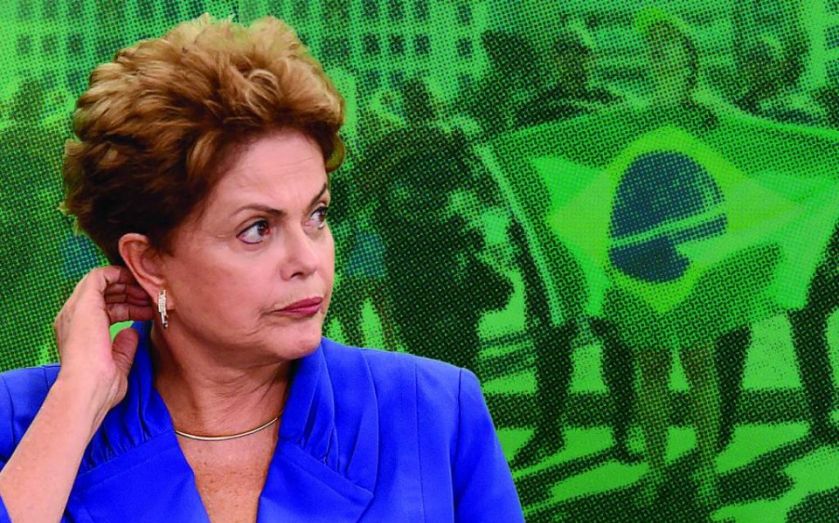 Crisis is engulfing Brazil as hundreds of thousands of prot­esters have taken to the streets demanding the im­peachment of President Dilma Rousseff, as the country slides into its worst economic crisis for 25 years.
Protests have taken place across the country in the third major day of demonstrations this year, following unrest in March and April.
Rousseff is less than a year into her second term as president, but her approval rating is at seven per cent. She was re-elected on a pro-reform platform, but those plans have turned to dust, and her critics say she must shoulder the blame for the prolonged slump the country is now facing.

Inflation surged to 9.5 per cent at the end of July, the highest rate in 12 years, while the economy is in recession and expected to contract up to two per cent this year. The Brazilian real has fallen heavily and the strength of the country’s bank has been called into question. Last week, its government debt was downgraded to one notch above junk status by ratings agency Moody’s.
“We are moving towards a more dramatic turn of events. We will see the currency depreciate further, the pressure from external factors [lower commodity prices] will increase and there will be more capital outflows,” predicts Maarten-Jan Bakkum at NN Investment Partners. “At some point, Brazil will reach the point where growth is so weak… There will be a climax where they need a new government and reforms.”

Protestors are calling for Rousseff to be impeached over the so-called “car wash” corruption scandal that has been unravelling at state-owned oil company Petrobras – where $2bn (£1.28bn) is alleged to have been stolen to pay for bribes.
Rousseff was chair of Petrobras while its directors were allegedly taking bribes and funnelling money into political parties which suited their aims. The corruption probe has drawn in dozens of politicians and members of Rousseff’s inner circle. There have been 117 indictments issued so far.
“It is incompetence… Petrobras is indicative of the fact that the government has used a lot of the large corporate entities and the state banks as a tool of nepotism and misguided policy,” says Oliver Leyland of Hermes Investment Management.
A presidential impeachment is not unprecedented, as back in 1992 President Fernando Collor was accused of corruption by his brother. He resigned from office on the last day of his impeachment trial.

All of this is so far from where Brazil was a decade ago, when at the height of the commodity boom the country seemed set for glory.
Economists ranked Brazil as head of the “Brics” – Brazil, Russia, India, China – considered to be the most promising emerging markets where investors ought to focus their attention.
For now, these hopes are ruined. “The big picture from Brazil is pretty ugly… The recession will be deeper and longer lasting than most analysts expect,” says Neil Shearing of Capital Economics.
In the meantime, economists expect politics to continue to dominate.
“The political landscape is likely to have a very large impact on the economic story for some time as this scandal continues to unfold and with growing discontent among the population,” says Esty Dwek of Loomis Sayles.