Concerns about inflation were already on the rise. Donald Trump’s victory in the US election has further stoked expectations that price pressure, absent in most Western economies since the financial crisis, may make a return in 2017 and beyond.

Inflation is a measure of how fast the prices of goods and services are rising.

It is calculated using different methodologies in different countries. Mostly, the measurement is known as the consumer price index or CPI. It tracks the change in prices of a shopping basket of good and services. The basket items are chosen to represent what a typical consumer might buy.

The CPI in the UK, for example, is calculated monthly using 180,000 price quotations from multiple retailers for 700 different goods and services. This notional basket is usually updated quarterly to reflect changes in preferences over time.

Very low or very high inflation is damaging to the economy. The aim is usually to try and keep CPI at 2% in order to maintain a “Goldilocks Economy” – not too hot, not too cold.

Different theories try to answer why prices rise at different speeds over time, but there are two central explanations within economics. Consider the analogy of an auction room. If it is full of willing buyers with plenty of money then it is more likely that higher prices can be achieved for a particular lot being sold. In this case the amount of money available, known as the “money supply”, will influence the likely level of prices. If there was less money available then the bidding could not go as high. This is the view of the monetarists who believe that inflation can be controlled by changing the level of money that circulates in the economy, for instance overcoming low inflation by adding more money via programmes such as quantitative easing (QE).

Another view is held by Keynesian economists, who treasure the beliefs of the British economist John Maynard Keynes. They believe that demand is the central reason for a change in prices. Revisiting our auction room again, if all the buyers believed that a particular item was in very short supply then they would be willing to pay a higher price for fear of not being able to buy another. In the Keynesian view, this would mean that demand was higher for an item than the supply of that item, hence the price rises until there is a winner. 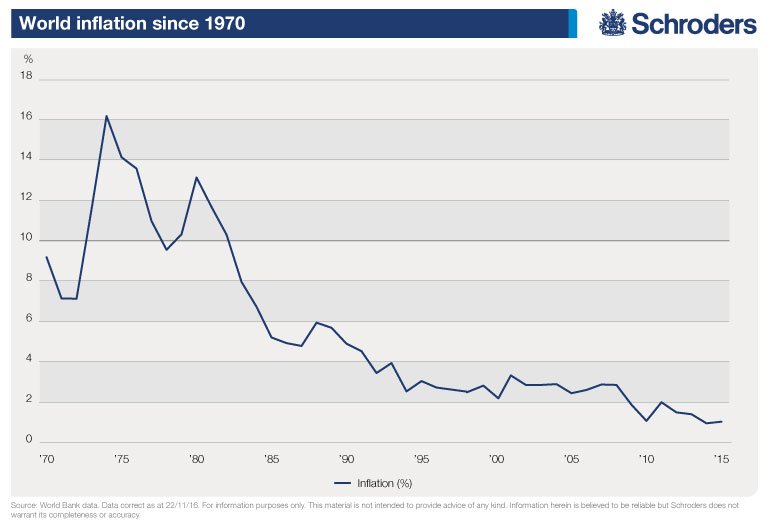 Western economies such as the UK and US have experienced similar levels of inflation in the last few decades. In the 1970s and 1980s, higher levels of inflation were blamed, in part, on the widespread unionisation of workers. Labour market reforms along with a more flexible work force slowed price increases. Other factors, such as demographics and the ageing of populations, may also have played a part.

In more recent years lower commodity and labour prices along with strong domestic currency values have kept inflation to record lows, which have been welcomed by Western households, as their cost of living remains lower.

A number of Western economies are now growing steadily, following the turbulence of the post-financial crisis years, and this is creating modest inflationary pressure. It could be that quantitative easing (QE) programmes – the electronic creation of money by central banks – has helped, although this is open to debate. Some argue that QE may have stored up inflationary pressures for the future that are yet to be felt.

Meanwhile the price of oil, which is used in the production and movement of so many other goods, has risen from low of $26 a barrel in February to hover around $50 in recent months. 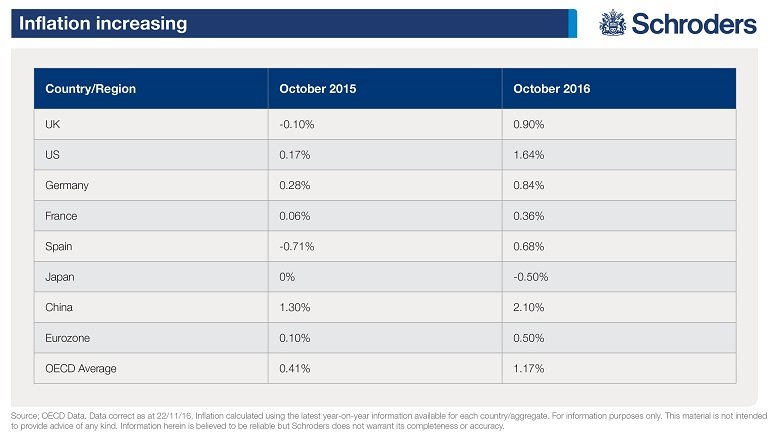 Currency movements also affect inflation. Consider the recent example of the UK. When the pound fell sharply against other currencies following the Brexit referendum in June, it meant that goods from abroad were suddenly more expensive to Britons. Prices at petrol pumps, with oil priced in dollars, rose almost immediately. Other imported goods are expected to become more expensive in the coming months.

How inflation erodes your money

Every rise in prices is taking money from your pocket, or your portfolio.

With 2% inflation, a pack of biscuits that costs £1 today will cost £1.02 in a year. This chart shows how inflation eats away at the purchasing power of money. The higher the rate, the greater the erosion, exacerbated by the effect of compounding. 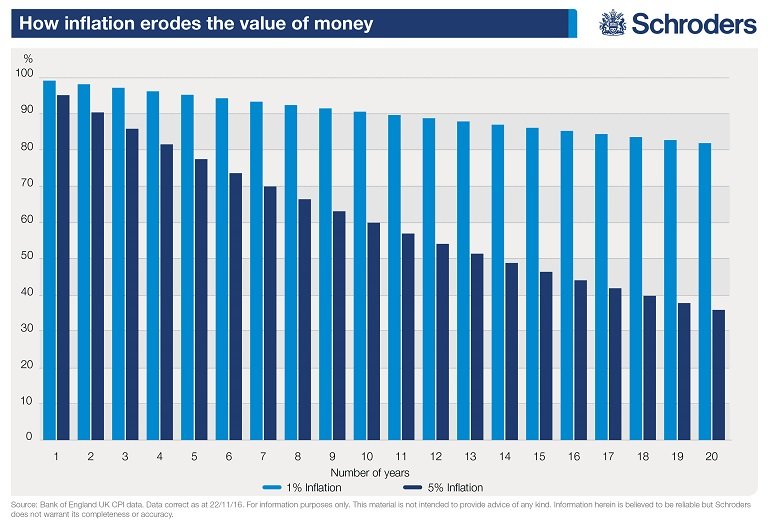 How inflation can affect a portfolio

The aim of investors is to grow their money at a rate that will meet their goals, and comfortably exceed inflation.

Although more volatile, stockmarket investments have historically performed well, benefiting from the earnings of companies usually rising along with inflation and when dividends are reinvested. It is these dividends that help in the battle to beat inflation, particularly when returns compound, as explained here.

The chart below shows the effect inflation had on the real value of £1,000 in three different scenarios: held as cash; in the average savings account and the average global equity income fund, with dividends reinvested, since 1995. The savings rate relies on data from the Bank of England. Returns from global equity income were calculated using the median return from all global equities funds, covering those domiciled in the UK, Luxembourg and France, since 1995. This is based on data from analyst Morningstar. The savings and investments results are based on “real returns” the return after the effects of inflation has been deducted. 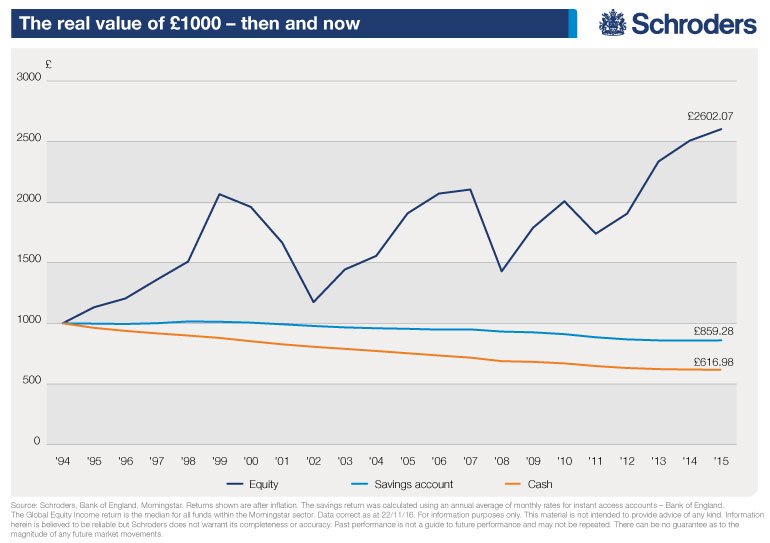 With nothing to mitigate its effects, cash suffers the most from inflation with a notional £1,000 declining to £617. A savings account performs better but still loses £141 in real value to £859. For long spells, the average savings account paid less than inflation, although shrewd consumers may have switched between best buy accounts to achieve better returns.

James Rainbow, Co-Head of Schroders UK Intermediary business, said: “Our research offers clear evidence of the value of stock market investing over the long term. When interest rates lag behind inflation, savers can struggle to maintain the real value of their money. Naturally, investors have to be aware that volatility is par for the course, but even after downturns such as the dotcom crash and financial crisis, equity returns still comfortably outperformed cash savings.”

The role of bonds is also worth considering. Investors often hold a mix of assets to diversify, on the hope that when one asset lags or falls another picks up the slack. Bonds are IOUs issued by companies and governments: you lend them money for a fixed period and they pay you regular “coupon” payments. If all goes well, your capital is returned at the end of the fixed period.

High inflation is bad for bonds. As prices rises, the spending power of the bond owner’s income reduces. This also affects their value. To make matters worse, higher inflation is normally accompanied with higher central bank rates, which leads to increased rates on newly issued bonds. Yesterday’s promise of 3% on a bond looks unattractive when new bonds are offering 5%. Again, this affects bond values.

Some governments, and some companies, offer inflation-linked bonds. The coupon payments are linked to a particular inflation rate and so may rise. The pay-off is that the payments tend to be lower than would be available on traditional bonds. Examples of this include “TIPS” in the US (Treasury Inflation Protected Securities) or index-linked gilts in the UK, often called “linkers”.

He said: “Inflation-linked bonds pay income that is adjusted, based on official headline inflation data. However, demand for inflation-linked securities is driven by expectations of future inflation.

“Currently, financial markets have extrapolated low levels of official inflation into the medium term. We believe this represents an opportunity. Should inflation expectations increase, and we believe that they could, active investors could profit.”

In some countries, savers have had access to inflation-linked products specifically aimed at the retail investor market. In the UK, for example, National Savings & Investments, a government-backed institution, offered index-linked savings certificates with generous terms for many years. These are no longer available to new investors.

Some investors believe gold offers protection from inflation. This is partly because gold is regarded a store of value. Its supply is limited, unlike cash which can be created by central banks; the creation of cash can lead to the creation of inflation.

Marcus Brookes, Head of Multi-Manager, said: “Inflation was already on the rise. Now I expect the policies likely to follow in Donald Trump’s presidency will pile on further price pressure.

“We have been changing our portfolios over the last year to reflect our view that inflation may be returning to the financial system. With eight years of healing the global economy is showing signs of stability, even in areas that had been hardest hit, such as Europe.

“Our portfolios have already begun to benefit from an emerging trend of higher than expected inflation. We have invested in areas that typically benefit from a generalised rise in prices, such as commodities, financials and cyclical companies – those that are more profitable as the economy picks up.

“We have also moved away from the areas that have benefited from low inflation such as bonds, property and ‘non-cyclicals’ – companies that deliver low but consistent growth irrespective of the economy. In the UK, these have included consumer staple stocks, such as Unilever. Instead we believe it could be the time for ‘value’ parts of the market, undervalued stocks, to perform well.”

– Read more about value investing on The Value Perspective

Equities generally have a positive correlation with inflation as companies can pass rising costs on to customers. Some fund managers believe inflation creates a real opportunity. James Sym, Fund Manager, European Equities, feels sectors such as financials and telecoms could benefit from rising prices.

Banks could benefit from rising interest rates, which helps improve their profit margins.

On telecoms, Sym said: “If inflation comes back, we’ll all be paying a little bit more for our phone bills. The cost for a lot of these telcos is already fixed: it’s the cables in the ground, the mobile towers. Those costs will remain unchanged but their revenues, and profits, should look much more sustainable as inflation allows higher prices.”

Should inflation continue to rise, there will be a number of opportunities open to investors. Asset allocation, will, as always, play a large part in generating returns. Picking the right asset class can be tricky at the best of times. Active asset managers are hired by investors with the aim of both protecting client wealth from macro economic challenges such as inflation, whilst also exploiting any opportunities that may also arrive.