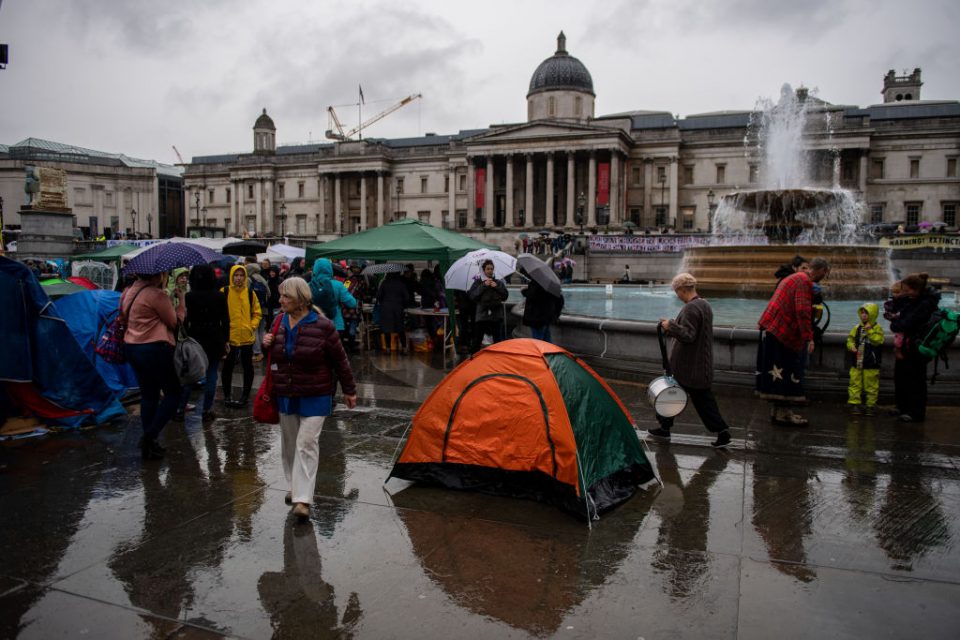 Police have spent the night clearing Extinction Rebellion protesters from Trafalgar Square after banning the activists from London.

The Metropolitan Police started the eviction at around 10pm, after earlier this week attempting to confine protests to Trafalgar Square.

Extinction Rebellion denounced the move as “draconian” and called it an “outrage” after climate change demonstrators spent the day targeting London’s financial district.

Protesters blocked the roads around Bank of England and Bank station.

They also attempted to blockade Square Mile institutions the Walkie Talkie building and Blackrock were targeted by protesters in a day of action across the City of London.

The Met said police had made 1,445 arrests by 5pm yesterday, while 76 people have been charged with offences including criminal damage and obstruction of a highway.

More than 90 arrests were in connection with the City of London action.

Deputy assistant commissioner Laurence Taylor said: “These conditions have been imposed due to the continued breaches of the section 14 condition previously implemented, and ongoing serious disruption to the community.”

“Is this what democracy looks like?” one rebel asked.

However, the group later said it would “let the Trafalgar Square site go tonight”.

“The climate and ecological emergency isn;’t going away and we remain resolute in facing it,” the group said.

“We urge the government and the authorities to join us in doing the same. We cannot do it alone.”

Extinction Rebellion has called on the government to commit to a carbon-free economy by 2025, among other demands.

“Since the beginning of this operation officers have been working hard to keep London moving,” Taylor added.

“The policing operation continues, and we will continue to take action against anyone engaged in unlawful protests at locations targeted by Extinction Rebellion.”