A completely solar-powered plane took off from Abu Dhabi this morning, and will now attempt to fly around the world using nothing but the sun's rays.

Called Solar Impulse-2, it will first head to Muscat in Oman, and from there will spend five months travelling across Asia, the US and southern Europe.
It won't all happen in one go, of course – multiple stops will be made along the way, and it might not even go according to plan, since a journey like this has never been undertaken by a plane before.
“The chances of succeeding at the first attempt to build a solar airplane capable of flying around the world were judged to be slim,” Solar Impulse writes on its website. But it adds that lessons learned from failed prototypes were used in the construction of the latest plane. In fact, 12 years of research went into the new technology.
If the journey proves successful, the implications could be huge – there's no reason why, soon enough, solar power couldn't be used to fuel commercial flights without releasing any dangerous fumes into the atmosphere. 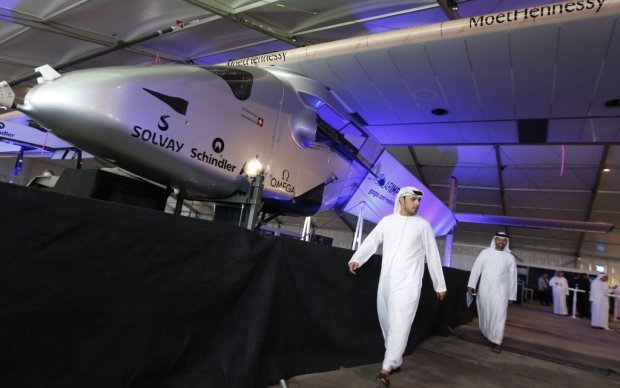 The plane took off from Abu Dhabi (Source: Getty)

Thousands of solar cells are located in the wings (Source: Getty)

Why solar planes would be so much better

Solar Impulse-2 is not built like a normal plane – it is made of carbon fibres which make it much lighter and therefore easier to get off the ground.
The wingspan is wider than traditional planes, however, since the wings have to house 17,000 solar cells. At night, when there is no sunshine to drive the plane, it will rely on energy-dense lithium batteries to continue its journey.
There are huge benefits to using solar-powered vehicles. First and foremost they do not release fumes that contribute to global warming, and there is no limit to the availability of solar rays (unlike fossil fuels).
Although solar vehicles are currently expensive to build and operate, costs are set to fall by a long way in the near future. The price of solar panels has dropped by 70 per cent in recent years, and is expected to be halved again over the next decade.
According to analysts at Deutsche Bank, over half the world will be able to produce power using solar energy as cheaply as by using gas in 2020.
There will be obstacles, though – weather conditions are not always reliable, and in the case of Solar Impulse-2 there may be weeks on end when it has to remain stationary because of lack of sunshine. To make solar planes more reliable and allow them to become a mainstream form of transport the future, an improved storage method would be needed for when no sunshine is readily available.