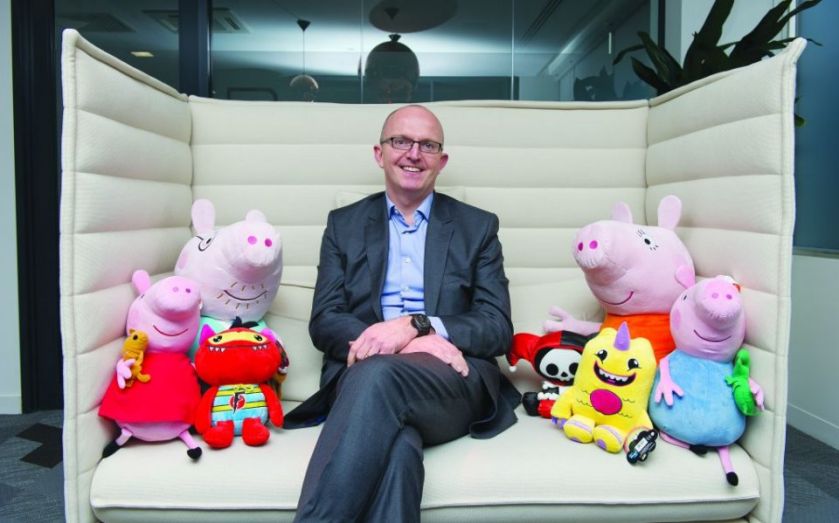 Giles Willits is sitting in the boardroom of Entertainment One’s offices in west London with a family of Peppa Pig cuddly toys gazing up at him. The British TV phenomenon – Peppa Pig, that is – is one of the production group’s most successful exports. But today pigs are forgotten and the group’s jolly finance chief is talking in metaphors about a distinctly slimier creature.

“There is an expression that you kiss a lot of frogs. I personally don’t. But we as a business do kiss a lot of frogs and it’s rare that we find a prince,” Willits says – the “frogs” being the US production companies it has tried and failed to strike a deal with over the past year.
The prince finally showed up four months ago in the form of Hollywood  producer Mark Gordon and yesterday, the FTSE 250-listed group announced a $132.6m (£87.6m) deal to buy a 51 per cent stake in his company, which has created hit films and TV shows, including Saving Private Ryan, and Grey’s Anatomy.
Whipping out a piece of paper, Willits swaps metaphors with diagrams and starts drawing arrows in all directions reflecting eOne’s global distribution network, supplying retailers, cinemas and broadcasters with content from its library of 35,000-plus film and TV titles.
A box on the left represents its production business where it is weaker and is now focused on establishing itself in the world’s four main English-language markets: the US, UK, Australia and Canada.
A buying spree in Canada this year has helped transform it into the country’s biggest TV producer. But before yesterday’s deal, it had yet to gain a foothold in the US.
“We needed to have a presence in the US, which is by far the biggest market. The best content selling internationally is US content and all the big shows that are on in the UK outside of the likes of Broadchurch and Downton Abbey are US shows.  That is where the value is,” Willits explains.
Together, the pair will form an independent studio joint venture to produce and finance the next Grey’s Anatomies and Criminal Minds. Meanwhile, Mark Gordon Company’s (MGC) library, which also includes the gritty US drama Ray Donovan, will ensure a stream of royalty payments.
Willits was previously director of group finance at Sainsbury’s before jumping ship seven years ago and is familiar with the risks that come with trying to crack the US market. But where several UK  retailers and supermarkets have failed, eOne, he is certain, will succeed.
“When Tesco, for example, went into the US, they were trying to launch a brand against the likes of Wal-Mart. It takes time, it’s huge and there is no certainty that brand will be successful.
“But we are not trying to launch in the US. We are buying a US business that exists and is one of the most successful producers of content already. We have a clear joint venture where [Gordon’s] interests and our interests are absolutely aligned,” he says.
Analysts welcomed the acquisition and said it fitted with eOne’s strategy of doubling the size of the business to £200m over the next five years. “We see this as a strategically sensible deal for eOne, providing it a significant presence in the world’s largest content market, and opportunity to continue focusing on developing its TV revenues,” JP Morgan analyst Emma Dunk said.
EOne has more frogs to kiss as it continues on its buying spree, with Australia and the UK next on Willits’ list:
“If you stand still, you are likely to have a worse time than if you keep going and move forward. I have that feeling, probably, because I used to work at Woolworths and Sears. Both those companies struggled because with hindsight, they stopped innovating.
“We need to move from being a distributor to being an owner of content rights which is what we are today.”

When Hollywood’s big hitters gather at the glitzy Hyatt Regency Century Plaza in Los Angeles later this month for the annual Producers Guild of America one guest will get top billing: Mark Gordon, who will pick up a lifetime achievement gong. The co-chairs of the Guild gush that he is “an entertainment powerhouse”.
Born in Virginia, the 58-year-old moved to Hollywood in 1985 and carved out a career as a producer of popcorn fare such as Speed. He was married for six years to Karen Villeneuve – the current wife of Earl Charles Spencer and aunt to Princes William and Harry.

1 Hugo Baring is head of JP Morgan Cazenove’s UK telecoms, media and technology practice. He joined JP Morgan Cazenove in 2007 from Morgan Stanley, where he was a member of the firm’s media & communications M&A practice, based in New York and London.
2 Baring has recently advised on the £500m takeover of British telecoms firm Daisy Group, Apax’s £600m acquisition of GMG’s majority stake in British publisher Trader Media Group and Pearson’s £400m sale of media firm Mergermarket to BC Partners.
3 He is a scion of the Baring family banking dynasty that founded Barings Bank in 1762, which became one London’s leading merchant banks before it collapsed in 1995. Another family descendant was Diana, Princess of Wales.