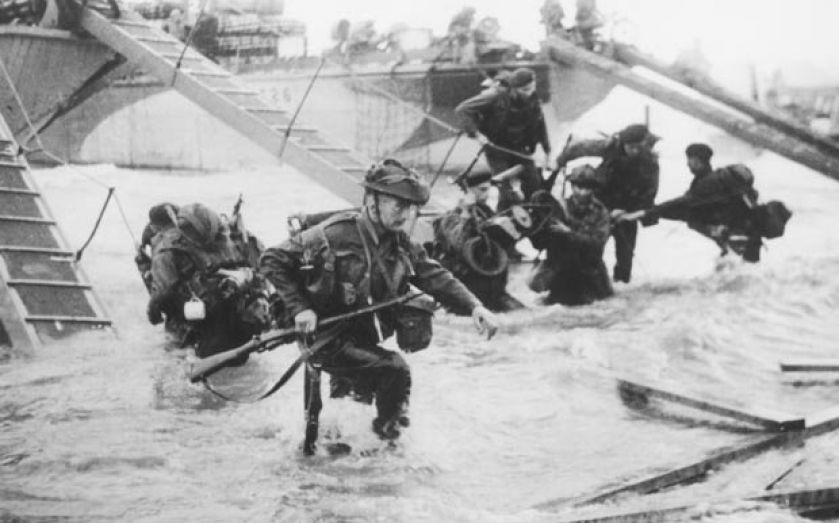 “OUR landings have failed and I have withdrawn the troops. My decision to attack at this time and place was based on the best information available. The troops, the air and the Navy did all that bravery could do. If any blame or fault attaches to the attempt it is mine alone.”
– letter by US general Dwight D Eisenhower, to be opened in the event of the failure of the D-Day landings at Normandy, 6 June, 1944.

BOTH my father and my country were lucky to run into sergeant Charles Bookman Fair. My father found himself a 17-year-old corporal, serving in the American occupying forces in Germany following the Second World War. Fair became his adopted “Big Brother”, teaching him how to be a soldier and an honourable man. When Fair joined my Dad’s company, his service record was read out, to the stupefied amazement of all those present. He had led an eight-man rifled mortar squad on D-Day, the largest seaborne invasion in history, whose seventieth anniversary we remember today. When every one of Fair’s men was either killed or wounded, including himself, he somehow managed to keep the mortar firing until he lost consciousness.

For this singular act of valour, Fair was awarded the Bronze Star for gallantry. I had the pleasure of meeting him decades later, shyly asking him about his experiences. Based on what I remember, the old man gently said to me, “John, I believed in what we were doing, I believed in our allies, and I believed in our leaders.” That was all he said, but in retrospect it amounts to everything.

The canyon’s worth of difference between this attitude and Allied foreign policy today is as painful to examine as it is necessary. First, from then US President Roosevelt and Winston Churchill, down to Fair, there was a sense of clarity about what the Allies were trying to accomplish, a simple, unimpeachable strategy that could be bought into as a whole, even if it was merely conveyed in the short-hand of: “Win the war, save the world from both Fascism and Japanese militarism.”

While we live in the far more murky world of multipolarity today, it is striking that the current leader of the free world Barack Obama – for all his supposed rhetorical gifts – has been particularly tongue-tied about what America hopes to do in this new era of many powers, let alone how to get there. Without such clarity, Washington will never be able to build the domestic political consensus needed to successfully execute any sort of long-term foreign policy.

Second, America must stop playing “small ball”, the White House’s baseball reference to its predilection for running a foreign policy devoid of risk. There is no better example than the problems that have emerged regarding the Asia Pivot, the President’s one big strategic idea, aimed at refocusing US attention on the region with both the greatest potential and the largest dangers. While sensible as a concept, by not boldly operationalising the idea – securing Trade Promotion Authority and nailing down the Trans-Pacific Partnership free trade agreement, embracing Japan and India, hedging against China – an idea is all that it largely remains. In the 1940s, the Allied leaders knew that a compelling vision was only the first step; then comes the hard work of translating vision into strategic reality.

Last, at every level – from general Eisenhower to Fair – leaders were prepared to take fundamental responsibility for their actions, to put their necks on the line for what they believed in. Ike’s prepared note in case the landings failed is a moving, eloquent testament to a leader prepared to put his career, reputation and future on the line for what he was doing. To put it mildly, and as I well remember after the disaster of the Iraq war, this is simply not what happens anymore. But without this level of commitment, of leadership, it is devilishly difficult to get anyone else to follow through on making major Allied foreign policy goals a grand success. Churchill, as ever, put it best, “Never, never, never give in.”

The first wave on D-Day, at pivotal Omaha Beach, was ineffective; by the end of the first crucial 24 hours, around 10,000 troops and civilians were killed. But at the end of that first day, 155,000 troops were also ashore. Eisenhower’s letter was not needed. Today, we remember that all-important day when an Anglo-American force saved the world. It is altogether fitting that we honour and remember Fair, the great Churchill and general Eisenhower, and all the myriad others that allow us to live in the generally pleasant world we now find ourselves in. However, if we are to properly laud them, we must learn what they did right, as well as celebrate that they did right.