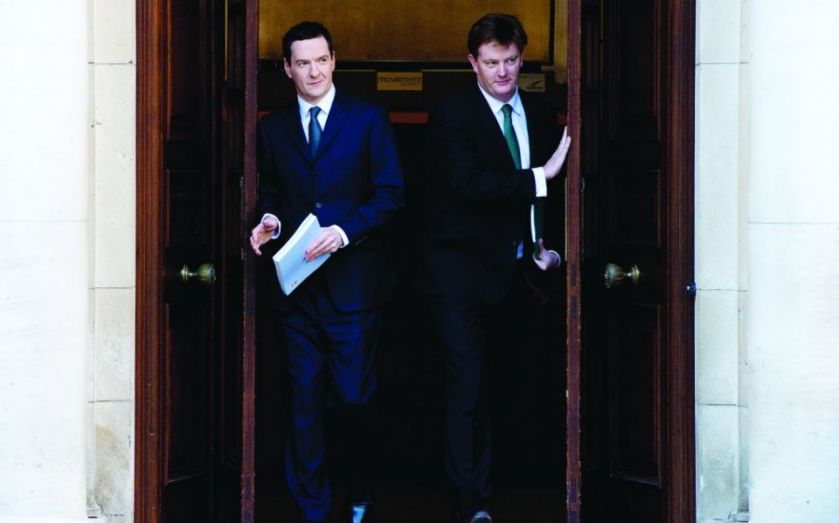 Chancellor plays Robin Hood by grabbing from the wealthy to fund stamp duty sweetener for those lower down property ladder.

● The UK’s economic growth has outperformed the March forecast of the Office for Budget Responsibility (OBR), giving Britain the fastest growth rate in the G7.
● Unemployment has fallen rapidly and the OBR expects the decline to continue but at a slower rate. It has significantly improved its outlook for unemployment since March.
● The OBR estimates the economy grew by three per cent over the whole of 2014, up from its March forecast of 2.7 per cent. Growth for 2015 has also been revised up to 2.4 per cent from 2.3 per cent. The forecasts for 2016-2018 have been cut.
● Unemployment is currently at six per cent, but the OBR expects it to drop to 5.4 per cent in 2015 and 5.2 per cent in 2016. Meanwhile the government said more than 500,000 new jobs were created this year, 85 per cent of them full time.
● Inflation in 2015 is forecast to be 1.2 per cent, down from a prediction of 1.5 per cent for 2014.

● From today homebuyers will pay stamp duty based on a graduated rate similar to the income tax system, with Osborne scrapping the previous “slab” system.  This means there will be no tax on the first £125,000 paid; two per cent on the portion up to £250,000; five per cent on the part up to £925,000; 10 per cent up to £1.5m. There will be a 12 per cent rate for the most expensive houses, but 98 per cent of buyers will see cuts in their tax bill. The tax giveaway will cost the government around £800m a year.
● The annual tax on enveloped properties (owned in a company name), which came into effect last year, will be increased by 50 per cent above inflation on properties worth over £2m. This means the annual charge on an enveloped property worth between £2m and £5m will be around £23,350, £54,000 for a property worth £5m and £10m, and £109,000 for homes worth between £10m and £20m.

● The personal allowance will be increased by a further £100 in 2015-16 to £10,600, the first step to Osborne’s new goal of raising the personal allowance to £12,500.
● The higher rate threshold will increase by inflation (1.2 per cent) in 2015-16 for the first time in five years, meaning that the full gains of the increase in the personal allowance are passed on to higher rate taxpayers paying 40 per cent tax. So the higher rate threshold goes from £41,865 this year to £42,385 next year.
● Non-domiciled UK residents who have been here for 12 of the past 14 years will now have to pay £60,000 a year to keep their non-dom tax status, up from £50,000 previously.  Osborne has also introduced a £90,000 charge for those who have been resident in the UK during 17 of the past 20 years.The existing £30,000 charge for non-doms who have lived in the UK for seven of the last nine years has stayed the same.

● Banks will have to pay more corporation tax in the coming years, as the chancellor has changed the rules on loss relief. Normally firms can offset profits against losses in previous years. Osborne will now only let banks offset half of their profits in any given year. Overall banks will end up paying the same amount of tax, but the timings change – and over the next five years, this will bring in an extra £3.5bn.
● Firms with overseas operations will face a tax of 25 per cent on profits deemed to be “artificially” shifted abroad to dodge UK taxes. The definitions have not been fully published, but the government expects to raise £1.355bn over the next five years.
● The fines paid by banks for Libor manipulation will be given to air ambulances and armed forces charities. This will include £10m for veterans with hearing problems, and new helicopters for the Great Western Air Ambulance, and the Kent, Surrey and Sussex Air Ambulance.
● GP services to get £1.2bn funding from bank foreign exchange manipulation fines.

● Osborne confirmed a full review of the 400-year-old business rates system, with results due at the 2016 Budget.
● The two per cent cap on the inflation-linked increase in business rates has been extended for another year until April 2016.
● High street shops, pubs and cafes with a rateable value of up to £50,000 will get a £1,500 discount on business rates – up 50 per cent on the £1,000 discount introduced last year.
● The doubling of small business rate relief will now be extended another year to April 2016.
● National Insurance on young apprentices abolished.

● From April 2015, savers will be able to access their defined contribution pension as they wish at the point of retirement, subject to their marginal rate of income tax, instead of the current 55 per cent charge for full withdrawal.
● From next April, beneficiaries of individuals who die under the age of 75 with a joint life or guaranteed term annuity will be able to receive any future payments from such policies tax free. Joint life annuities will be able to be passed on to any beneficiary.
● New employer contribution rates will be introduced for the Armed Forces Pension Scheme, the Firefighters’ Pension Scheme and the Judicial Pension Scheme
● The full State Pension will be increased by £2.85 per week.
● From April 2015, the ISA allowance will rise from £15,000 to £15,240, and changes to the starting rate of savings tax will mean those earning under £15,600 will pay no tax on savings income.
● ISA savers will be able to pass tax advantages to their spouse or civil partner if they die.

● Osborne announced support for peer-to-peer (P2P) and crowdfunding platforms through a package of measures to remove barriers to their growth from regulation and tax rules.
● HM Treasury and the Bank of England will extend the Funding for Lending Scheme for small business loans until 29 January 2016.
● The government is providing a further £400m to support venture capital through the British Business Bank’s Enterprise Capital Funds programme.
● The government will allow gains that are eligible for Entrepreneurs’ Relief (ER) and deferred into investment under the Enterprise Investment Scheme (EIS) or Social Investment Tax Relief (SITR) to benefit from ER when the gain is realised.

● Fuel duty remains frozen.
● The supplementary charge for oil and gas operations’ profits in the UK North Sea, which are paid on top of corporation tax, will be reduced from 32 per cent to 30 per cent.
● The ring fence expenditure supplement, which allows companies whose expenditure exceeds their production income to increase the value of losses carried forward from one accounting period to the next by a compound 10 per cent a year, now applies for 10 years, rather than six.
● A shale gas fund, similar to a sovereign wealth fund for the north of England, will be launched to keep the benefits of its resources there.
● The government will establish a new £5m fund for shale exploration to provide independent evidence about the robustness of the existing regulatory regime.
● The government will allocate £31m of funding to create “world class sub-surface research test centres” through the Natural Environment Research Council.
● The government will provide an additional £6m for the Oil and Gas Authority in 2015-16 to help establish the body as a new arms-length asset steward and regulator.

● The government will exempt children under 12 from Air Passenger Duty on economy tickets from 1 May 2015, and children under 16 will be exempt from 1 March 2016.
● Funding of £15bn for 84 road projects in England by 2021.
● The government will put £2.3bn towards flood defence schemes in England and expand tax relief on business investment in flood defences.
● Tendering for new franchises for Northern Rail and TransPennine Express to replace pacer carriages with modern trains.

● George Osborne committed to a consultation on how tobacco manufacturers and importers can pay more, suggesting a hike in taxes for the industry.

● Welfare spending expected to be £1bn lower than forecast in March.
● The government has put a two-year freeze in working-age benefits (first announced in October).
● Migrants to lose unemployment benefits if they have “no prospect” of work after six weeks.

● A £78m theatre and arts venue is to be built on the former site of Granada’s Manchester TV studios.
● The theatre tax break may be extended to orchestras and a new tax credit has been created for children’s TV producers.
● Britain awarded the lead role in the global effort to explore Mars.

● The government has called for the availability of £10,000 loans for post­graduate students.