GEORGE Osborne has set out plans to tighten up fiscal rules in order to ensure the government achieves a surplus by the end of the next parliament in 2020.

A new Charter for Budget Responsibility will be introduced, in which the chancellor will detail his plan to make sure the debt keeps falling, alongside proposals to use budget surpluses to back up the commitment.

The charter will be presented to parliament at the Autumn Statement in 2014. MPs will be asked to vote on the proposals just months before the general election, in a move that Osborne may hope will help him outmaneuver Ed Balls and Labour on the economy.

The chancellor signalled the start of a review period, which will consider a more appropriate time period to be covered by the charter, in order to reduce the structural deficit. 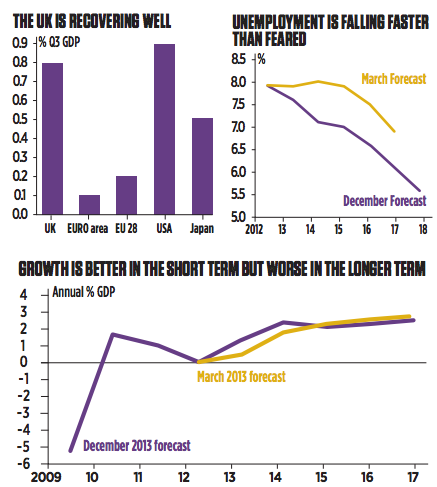 It is likely that the new document will assess progress on a shorter timescale of between two and three years instead of the current five. A Treasury insider said the change would make any fiscal target “more binding.”

Osborne said in his statement yesterday that he would “fix the roof while the sun is shining,” adding: “We will bring forward next year an updated Charter for Budget Responsibility and ask Parliament to support it. I can say today that government must ensure that debt continues to fall as a percentage of GDP, including using surpluses in good years for this purpose.”

Labour’s shadow chancellor Ed Balls was heavily criticised by MPs on both sides of the house for his response to the Autumn Statement yesterday, which many viewed as his worst to date. However, in a comment in The Guardian newspaper, Balls indicated that he would seek to go one better than Osborne with fiscal rules of his own. He said: “We have said very clearly we will have two fiscal rules. One: to get the current budget back into surplus and secondly to have the national debt falling. We will do that through our manifesto. We have had fiscal responsibility charters in the past so we have no aversion to that.”

As part of the new charter the government will set out plans for a cap on welfare spending. The cap will be decided by a vote in parliament and any changes would require agreement via a similar process. If the government exceeded the cap, the chancellor would be called before MPs to explain the extra spending.