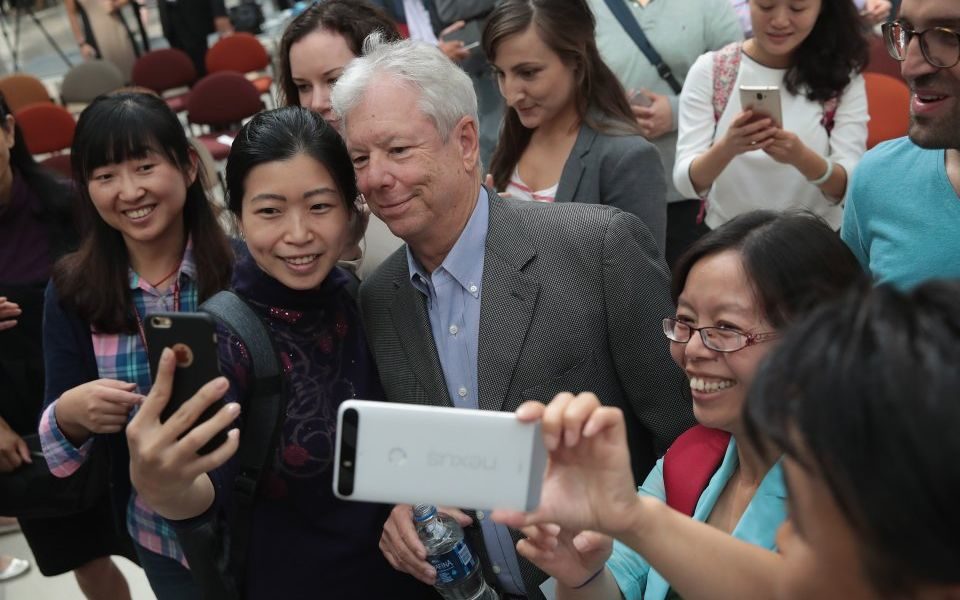 Richard H. Thaler, the US economist who elevated the word ‘nudge’ to a political catchphrase, can now add ‘Nobel laureate’ to his impressive biography.

In a statement, the Royal Swedish Academy said that Thaler, who won the 2017 prize in economics for his contributions to behavioural economics, “has incorporated psychologically realistic assumptions into analyses of economic decision-making. By exploring the consequences of limited rationality, social preferences, and lack of self-control, he has shown how these human traits systematically affect individual decisions as well as market outcomes.”

Thaler, a professor at the Booth School of Business at the University of Chicago, is perhaps best-known for his popular book about choices: Nudge: Improving Decisions about Health, Wealth, and Happiness — how we make them and what we can do to improve how we make them.

Perhaps unknown to many, however, is that Thaler offered insights into when not to intervene at the 70th CFA Institute Annual Conference in Philadelphia this past May.

Read a recap of the session, entitled “Richard Thaler: To Intervene or Not to Intervene” on Enterprising Investor. For a refresher on what behavioural economics is all about, watch an interview with Thaler, conducted by Ron Rimkus, CFA.

Under the central theme of Embracing Change: Creating Opportunity in Uncertainty, attendees of the CFA Institute European Investment Conference will consider and analyse the European climate and the changing political landscape and dig deeper into the most pressing issues for the profession. See the list of speakers and register online today.

Thaler has also contributed to the CFA Institute Financial Analysts Journal®, among other CFA Institute publications over the years. In his prescient conclusion to the 1999 piece, “The End of Behavioral Finance,” he wrote:

“Behavioural finance is no longer as controversial a subject as it once was. As financial economists become accustomed to thinking about the role of human behaviour in driving stock prices, people will look back at the articles published in the past 15 years and wonder what the fuss was about. I predict that in the not-too-distant future, the term ‘behavioural finance’ will be correctly viewed as a redundant phrase. What other kind of finance is there? In their enlightenment, economists will routinely incorporate as much ‘behaviour’ into their models as they observe in the real world. After all, to do otherwise would be irrational.”

Richard Thaler has offered his insights in a range of other CFA Institute interviews and articles over the years:

“One of the puzzles about the equity risk premium is that in the U.S. market, the premium has historically been much greater than standard finance theory would predict. The cause may lie in the mismatch between the actual asset allocation decisions of investors and their forecasts for the equity risk premium. In this review of the theoretical explanations for this puzzle, two questions are paramount: (1) How well does the explanatory theory explain the data? (2) Are the behavioural assumptions consistent with experimental and other evidence about actual behaviour? The answers to both questions support the theory of ‘myopic loss aversion’ — in which investors are excessively concerned about short-term losses and exhibit willingness to bear risk based on their most recent market experiences.”