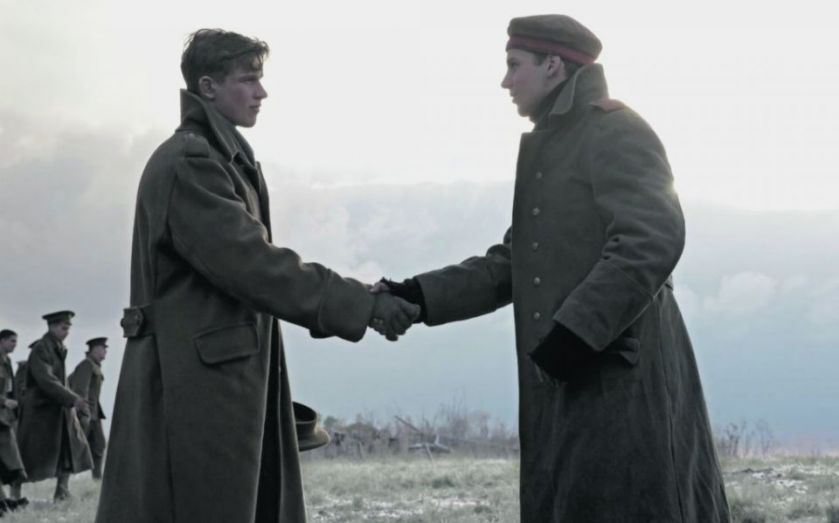 The film had its world premier on Wednesday. Some 8m people have already tuned in to see it and it has split critics down the middle, being described as “a masterpiece”, “grim”, “epic”, and “disrespectful”. It’s not the latest blockbuster movie, but Sainsbury’s two-minute Christmas ad.
There was a time, not so very long ago,  when Christmas ads were almost entirely aimed at parading products in front of you; tasty mince pies, iPods and posh Christmas crackers. Now, it’s a competition to make you shed the most tears and, by all accounts, it’s a strategy that works.
This year, it’s a two-horse race to get you to the end of your pack of Kleenex. John Lewis waddled into our hearts two weeks ago with Monty the penguin and now Sainsbury’s brought us the aforementioned, emotional glimpse at the famous Christmas truce in the trenches of WW1.
There has been a substantial amount of fuss over both ads. But the Sainsbury’s ad is causing a bit of a ruckus. By Friday, it had received 240 complaints to the Advertising Standards Authority (ASA), and there are probably a lot more by this morning. But then just look at its YouTube viewing figures; 8m – on a par with John Lewis’ ad, which is a week older, with 15m views.
Why the commotion? Well, all are in agreement the ad is a fantastic piece of cinematography. Its timing, launched in the week of 11 November, resonates with everyone. “I’d never normally tweet a link to an ad, but if you haven’t seen Sainsbury’s Christmas one yet, it'’ just marvellous,” tweeted MP Ben Bradshaw. Former ad man Steve Henry, founder of HHLC agency, thinks its timing is even more poignant than the WW1 centenary. “I think the sentiment is fantastic – and taps into something very contemporary. A feeling that if you get down to the level of real, ‘ordinary’ people, you tend to find decency and generosity of spirit. For me, it’s definitely a piece of work to be applauded.”
But many are asking if it’s morally acceptable to use this snapshot of war, in which many of our forefathers died, to push up sales at a supermarket. Hence the ASA complaints and a handful of disapproving headlines. “Should we really be using the horrors of the First World War to sell Christmas turkeys?” asked one of AMV/BBDO’s rivals.
Some argue Sainsbury’s redeems itself by raising money for the Royal British Legion. The ad features a chocolate bar, given from a British soldier to a German, and the supermarket is selling 5,000 replica bars an hour, with half the profits going to the charity.
Then there’s Andrew Hamilton, the grandson of the soldier who is believed to have started the truce, who has recorded a “behind the ad”, video for Sainsbury’s – so he’s obviously given it his approval. But it all boils down to whether this is a suitable and successful topic for flogging groceries.
“This is not a Christmas ad for Sainsbury’s; it’s a rather late Remembrance ad,” says global chief executive of branding agency The Gild, Simon Massey.
“As a Christmas ad, at a time when Aldi and Lidl are thrashing the big four with high quality and low prices, I don’t think the audience wants an emotional journey through the war. I think they want to know that Sainsburys will provide them with a warm family Christmas without breaking the bank.”
No doubt the topic will roll on over Christmas, however the real proof will be in the puddings – Sainsbury’s Christmas ones in this case.