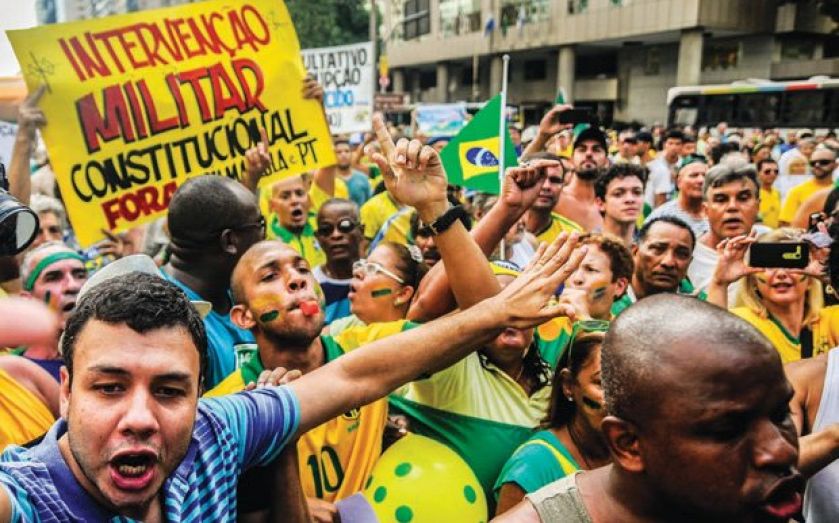 INVESTORS in emerging markets have been left sorely disappointed in recent years, as on-going political and economic problems are plaguing the sector’s key nations, including Brazil, China, Turkey and Russia.

Over five years, the MSCI Emerging Markets index has risen just 8.9 per cent, compared to the S&P 500’s 60 per cent rise. But despite new governments being elected in Brazil, Turkey, India and South Africa last year, many developing economies are still fragile, and some managers believe the situation will get worse before it gets better.

BRAZIL ON THE BRINK
A collapse in one of Brazil’s troubled banks is one of the biggest risks facing emerging markets this year, says Maarten-Jan Bakkum, senior emerging markets strategist at ING Investment Management.

“There could be a credit crisis event, [the likes of] which we haven’t seen for 13 years,” he says.

Since the last major crisis – the financial crash of 2002 in Argentina and Brazil ­– emerging markets have been “relatively quiet”, but Bakkum now fears a Brazilian bank could “fall over” and the impact would be felt across emerging economies the world over.

Brazil seems dangerously close to crisis. Although President Dilma Rousseff was re-elected last year on a pro-reform platform, a recession is looming and the currency has been among the worst performers in the world.

Traders have capitalised on the weak real, using it for carry trades with stronger currencies, such as the dollar. This has placed pressure on the country’s banks, which are also facing fines in relation to a corruption probe involving state-run oil firm Petrobras.

CAPITAL OUTFLOWS
Meanwhile, the political situation is deteriorating. Last week, Brazilians staged the largest political protests since those that ended the military dictatorship in 1985. Over 2m people have taken to the streets in anger at President Rousseff’s alleged links to the Petrobras scandal.

“Capital flows out of Latin America as a whole have been increasing… [A bank failure] is a risk we have identified, and it is possible given the Petrobras corruption scandal and the political situation in the country,” Bakkum says.

TURKISH BANKS
Turkey is also on Bakkum’s radar as a potential threat because of imbalances in its economy. There has been huge credit growth in the country over the last several years, and many of its banks face a funding gap.

“Turkey could be a problem for the rest of the world… Its banks have been very aggressive in their growth of credit,” he says. “The Turkish central bank knows about this but does nothing about it.

“You want to avoid being invested in countries where the carry trade has been played a lot, such as Brazil, Turkey and South Africa… I can imagine that things may have to get much worse before they get better.”

DOMINO EFFECT
Contagion is the biggest problem for investors in emerging markets, as when a crisis develops in one country, repercussions are seen across the sector. Due to the risks facing Brazil and Turkey, Bakkum is recommending a neutral weighting to emerging markets at the moment.

The concerns are shared by other fund managers too. Caroline Shaw, head of fund and asset management at Courtiers, explains: “Political risk is pretty big at the moment. Turkey is embroiled in the Syria crisis with Isis, and in Brazil there is still a lot of political risk over whether President Rousseff will do a decent job at all.”

She is also wary of China. The economy is struggling under a mountain of debt which has accumulated rapidly over the last five years. Although there has been much concern among analysts in the West, so far Chinese authorities have made few moves towards resolving the situation.

“The authorities are going to do exactly what they want to do… It is not a place you would want to invest,” she says.

LAGGING BEHIND
Shaw is only recommending exposure to select Asian markets such as India, and has avoided Latin America and Turkey entirely. She sold out of all frontier markets a year ago on concerns over their economies.

“We allocate to emerging markets when we un-allocate to somewhere else. We haven’t believed that they are a better choice. The trend has been for developed markets to do better than emerging markets,” she says. “For example India’s Nifty is up 7 per cent over the last year while the S&P 500 has been up 25 per cent.”

BRIGHT SPOT
One market which does seem more promising is India. Last year, pro-reform politician Narendra Modi was made Prime Minister in elections which were widely seen as a watershed moment for the country.

India has struggled with high inflation, poor infrastructure and a labyrinthine policy-making process which has hindered change. In 2013, the rupee plummeted in value and the Bombay Sensex equity market made a loss of 5.9 per cent that year.

INDIA’S RISING STAR
Since his election, Modi has pushed through a range of reforms, and fund managers have begun to highlight India as a market with real promise.

“Modi is an out-of-the-box thinker. All the signs are there that India is on the path to becoming one of the most pro-growth, pro-investment economies in Asia, creating long-term opportunities for equity investors,” says Kunal Desai, head of India equities at Neptune Investment Management.

Few countries have seen such a rapid turn-around in investor sentiment. If Brazil and Turkey can act to stem any banking crisis before it appears, and push through pro-market reforms, perhaps they too will see the same success.