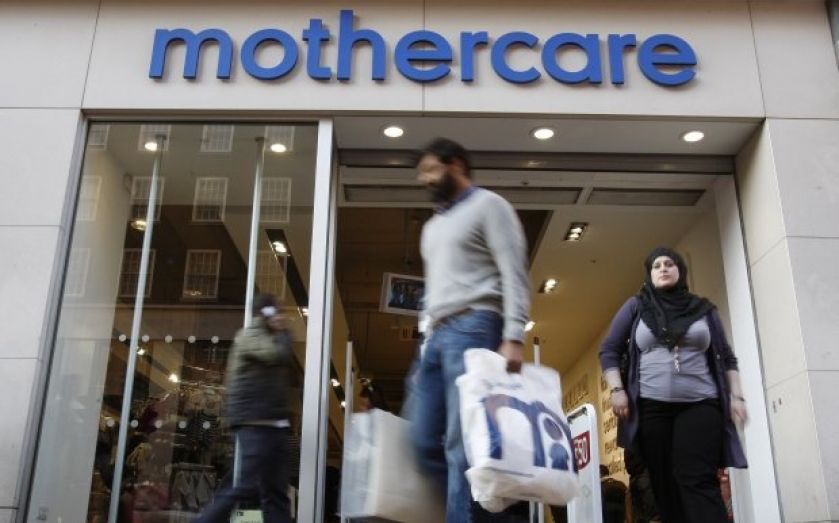 Shares in Mothercare fell more than five per cent this morning after it emerged this weekend that the retailer is in talks with its lenders again over the terms of its banking covenants just seven months after securing a £90m refinancing deal.
The retailer, which has Mothercare and Early Learning Centre stores,  asked its banks HSBC and Barclays for more headroom to help it invest in opening new stores as it seeks to turn around its UK business. It has a £50m loan and a £40m revolving credit facility including a bank overdraft with the two lenders.
In a statement this morning, Mothercare said that it was “in regular dialogue with all its financing partners” and is not in danger of breaching its banking covenants.  The company still expects meet full-year profit and net debt expectations.
“Mothercare continues to discuss with its banks its future plans for the business and the consequential funding requirements, and is grateful to them for their continued support,” the company said in a statement.
In February, chief executive Simon Calver stepped down just weeks after dismal trading over Christmas prompted the group to issue a profit warning. Last week it also emerged that Mothercare had written to around 500 over its suppliers asking for a 2.5 per cent reduction in cost of goods and extending credit terms to 90 days.
News of bank talks prompted Cantor Fitzgerald to slash its target price today by 25 per cent to 114p from 151p and reiterated its “sell” recommendation.
“The fact that the second half has not been good in trading, margin and cash terms was not a surprise to us as we have been questioning the rising average debt levels, failing UK strategy and weak balance sheet,” Cantor analyst Mike Dennis said.
“The risk now is that the current management’s recovery plan requires more capital which is unavailable from the £90m current total banking facilities…Worse still, in our view, is that Mothercare’s management might have to consider a deeply discounted rights issue or a joint venture deal to inject cash into the business and take loss making operations off the balance sheet and profit & loss account,” he added.