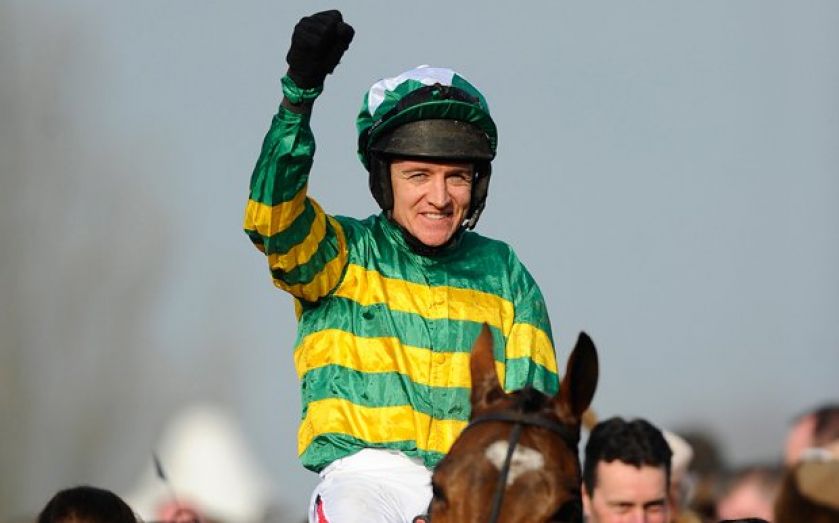 JOCKEY Barry Geraghty praised the staying power of More Of That after the Jonjo O’Neill-trained gelding upstaged Annie Power and Big Buck’s in the World Hurdle at Cheltenham yesterday.

The feature race of the festival’s third day had been billed as a straight duel between the favourites but ended with Annie Power beaten for the first time and its four-time winner Big Buck’s retired.

Instead it was the JP McManus-owned 15-2 shot More Of That who lasted best in the three-mile contest, Geraghty holding off the nevertheless impressive Annie Power, under Ruby Walsh, in a stirring finish.

“He still is a little bit innocent but he’s got an engine. I always felt I had the finish,” said Geraghty, who took his tally for the festival to three winners. “Ruby was upsides me in the straight and he looked to be travelling and when he gave her a squeeze, the response was okay but I thought I had enough in reserve.”

Big Buck’s – winner of the race every year from 2009 to 2012, before missing last year’s through injury – never looked in contention this time and the 11-year-old finished fifth.

Trainer Paul Nicholls said the call to retire him immediately was “not an emotional one”, calling it “the right decision at the right time”.

He added: “I’m thrilled. He’s just been wonderful. It’s the obvious thing to do. I wouldn’t ask him to run again. Halfway round I could see he wasn’t jumping so fluently and his legs weren’t what they were.”

AP McCoy, who finished third on At Fishers Cross, earlier rode through the pain barrier to claim his first winner of the week aboard 7-1 shot Taquin Du Seuil in the JLT Novices Chase. The Champion Jockey admitted he considered pulling out after hurting himself in a fall on Wednesday.

“I was up in the night,” said McCoy. “However sore I feel now I would have felt a lot worse watching someone else win this.”

Tom Scudamore timed his charge aboard Dynaste to perfection in the Ryanair Chase, while Fingal Bay and Richard Johnson pipped Southfield Theatre in a photo finish in the Pertemps Network Final.