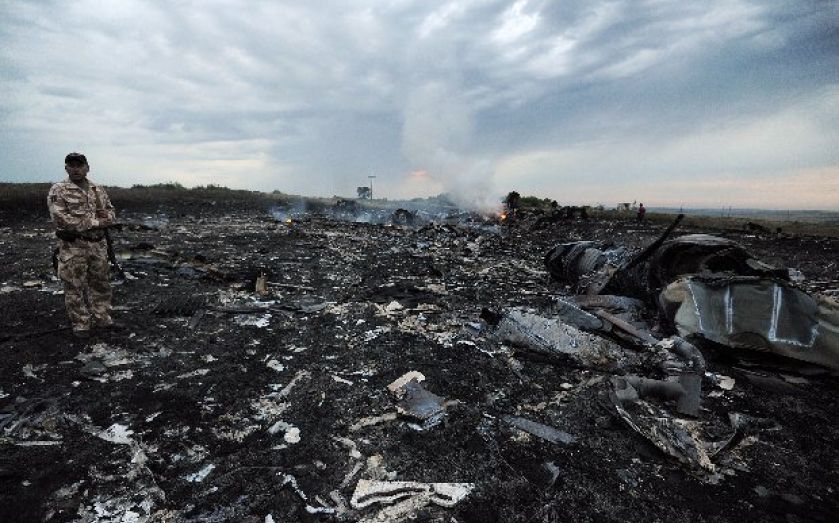 European shares edged lower today, weighed down by geopolitical risks in the aftermath of the MH17 Malaysian Airlines crash over eastern Ukraine and the Israeli ground offensive in the Gaza strip.

Investors reacted with caution to the uncertainty over how the downing of the jetliner would impact the ongoing conflict between Ukraine and separatists, as well as the widening rift between Russia and the West.

While markets closed down across the board yesterday and investors sold off stocks to jump on safe havens such as gold, selling pressure today was moderate and volatility low, with markets recovering from heavy losses early on to close marginally lower for the weekend.

The pan-European FTSEurofirst 300 closed even, while the FTSE gained 0.1 per cent, led higher by ITV and Shire on the back of positive news for both London-listed firms in the last couple of days. The German Dax extended Thursday's losses, slipping 0.4 per cent.

The prospect of a prolonged and more volatile dispute between Russia and the West, already experiencing a troubled relationship in the last few months, sent the rouble tumbling, down 0.2 per cent to 35.25 against the dollar.

The Russian rouble denominated Micex dropped 1.9 per cent in the first minute of trading, and down 1.6 per cent at midday.

Shares of Malaysian Airlines dropped sharply by 11.1 per cent today as investors rushed to sell their stock in the carrier after its second major tragedy this year.

Flight MH17, a Boeing 777 flying from Amsterdam to Kuala Lumpur with 298 people on board, went down over eastern Ukraine near the Russian border. US and Ukrainian officials say the airliner was shot down in a missile attack.

This followed the disappearance of flight MH370 in March, carrying 227 passengers and 12 crew members. These two incidents have dealt a major blow to the airline, with the company worth losing more than 35 per cent its value from last year.

The airline was facing serious issues even before the two tragedies however, struggling to get to grips with competition from low cost rivals such as AirAsia, co-founded by QPR owner Tony Fernandes, and afflicted by powerful trade unions and the country's high fixed-labour costs.

In May, the Kuala Lumpur-listed carrier recorded a first quarter loss of $137m, citing the dramatic impact of the "tragic MH370 incident" as part of the reason.

The latest crash seriously worsens the outlook for the company.

“In the history of aviation there’s never been an airline that had to go through two huge disasters in the span of four months, so I don’t think there’s any historical evidence that they can get out of this.”

Investors last night moved out of equities into traditional safe-haven assets, like gold, in reaction to the crash, with the precious metal often viewed as a hedge against risk. Haven assets did rally and the price of gold jumped $20 last night, but then moderated in early Asian trading by $3.509.

Reacting to the incident and increased geopolitical risks, also taking into account the news from the Middle East where Israel's government said it had launched a ground offensive in Gaza, the S&P on Thursday 500 fell by 1.2 per cent, its biggest daily loss in over three months.