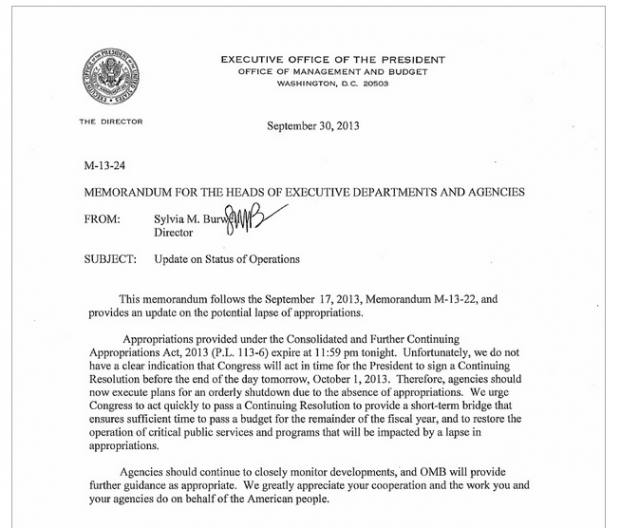 The US government has begun its first partial shutdown in 17 years.

The Federal government failed to pass any federal spending bills for this fiscal year, which begins today.

Ongoing wrangling between the Republican-led House and Democratic-led Senate has pushed approval ratings for Obama and Congress to new lows – 44 per cent and 10 per cent respectively.

Agreement on ObamaCare – Obama's flagship healthcare reform, the Affordable Care Act – has been obstructed repeatedly by Tea Party Republicans in the House.

Today, about 800,000 government workers will be sent home on unpaid leave with national parks and monuments being closed. Most food checks will be suspended. Loan guarantees will be put on standstill, along with job stats, affecting the Fed's decision on when to taper and meaning Bernanke is more lilely to hold back on a decision.  1.4m uniformed military will, however, stay working and being paid after a last-minute bill was passed on Monday night.

The dollar is near a seven and a half month low following the start of the shutdown.

Despite concerns, European markets have opened relatively unchanged on the US news – flat to positive – suggesting that investors believe that a partial shutdown, provided it is resolved quickly and Washington makes the right noises, will not have too much of an effect on the US economy. The market seems reasonably confident that a new budget can be agreed on, which will see the debt ceiling raised on or around 17 October.

Failing to agree a deal there would be a calamity for the US. But the risk of US politicians forcing the country into a full debt default is slim in our view. We ultimately expect sense to prevail and the two sides to agree a solution that keeps the wheels on the economy.

Both sides know that forcing the country into a self-inflicted and entirely avoidable default would be a disaster, economically and electorally. It may hurt the Republicans more than the Democrats, and comments overnight suggest some of the former are worried about the consequences. Failing to raise the debt-ceiling would be worse. The intransigence over Budget negotiations may, however, show that the politicians will flirt with going past the debt-ceiling deadline to try and get their pound of flesh before seeing sense and averting disaster. Bottom-line, we expect no serious further net tightening in US fiscal policy as a result of any last minute deal. Though an agreement may just be a temporary sticking plaster that funds the government for a few months.