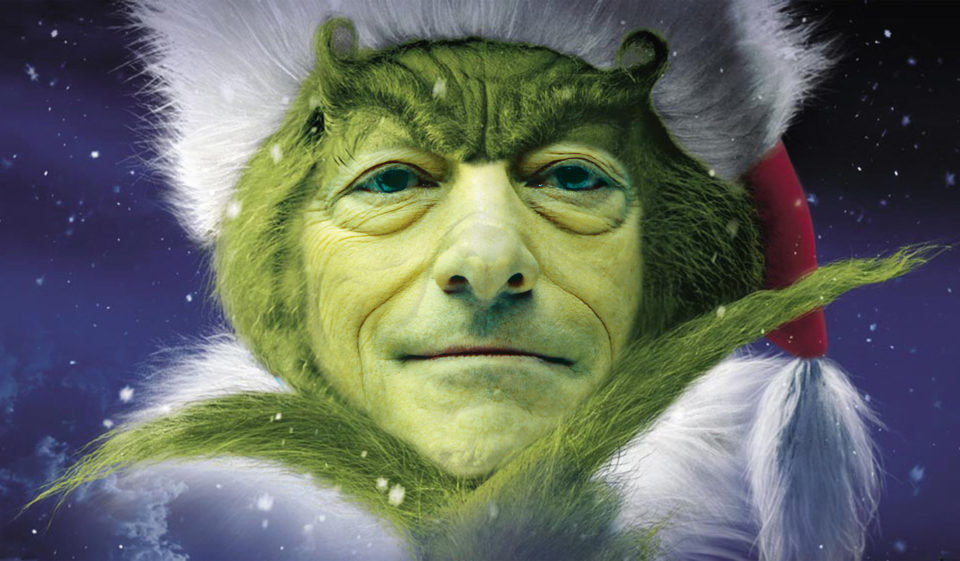 European stocks dropped and the pound sank against the euro yesterday after chief Eurozone rate-setter Mario Draghi disappointed investors who had banked on a bumper Christmas.

After months of talking up extra stimulus, Draghi cut the interest rate paid on deposits kept at the European Central Bank (ECB) to minus 0.3 per cent compared with expectations of minus 0.4 per cent.

The landmark asset purchase programme was extended for just another six months at the same monthly rate. Many were betting on a 12 month extension and a higher rate of purchases.

“Santa’s sack was half-empty,” said Ken Wattret, an economist at BNP Paribas. “As plenty of children will discover on the morning of the 25th, it’s all about expectations and having built them up, the ECB unfortunately failed to deliver fully.”

The asset purchase programme will now run until the end of March 2017 instead of September 2016 as initially planned, but will stay at a monthly rate of €60bn (£43bn). It will take the value of the programme up to €1.5 trillion from €1.1 trillion. The ECB also added regional government bonds to the list of assets it can buy.

Cash from expired bonds will also be re-invested into the programme. The pound immediately dipped to a value of €1.4003 from €1.4164 after the interest rate disappointment. Following the announcement of asset purchase programme extension, it then plummeted to €1.3821.

The ECB downgraded its inflation forecasts to one per cent in 2016 and 1.6 per cent in 2017 from 1.1 per cent and 1.7 per cent respectively. Inflation in the Eurozone has undershot the ECB’s two per cent target since 2013 and remained frozen at 0.1 per cent in November despite the impact from low oil prices starting to wear off.

Some believe Draghi, dubbed Super Mario for the success of previous policy interventions, was limited by a number of Scrooges on the ECB’s governing council.

One suspected Grinch is German central bank boss Jens Weidmann, who has not held back from criticising the bond-buying scheme. He believes it will create moral hazard by reducing the borrowing costs of profligate governments.

“The suspicion is that Mr Draghi overplayed his hand and ran into stiff German-led opposition based on doubts about the economic case for further easing,” said Simon Ward at Henderson Global Investors.

After Draghi’s disappointment, attention now turns to the US, where Federal Reserve chair Janet Yellen is expected to raise interest rates in two weeks.