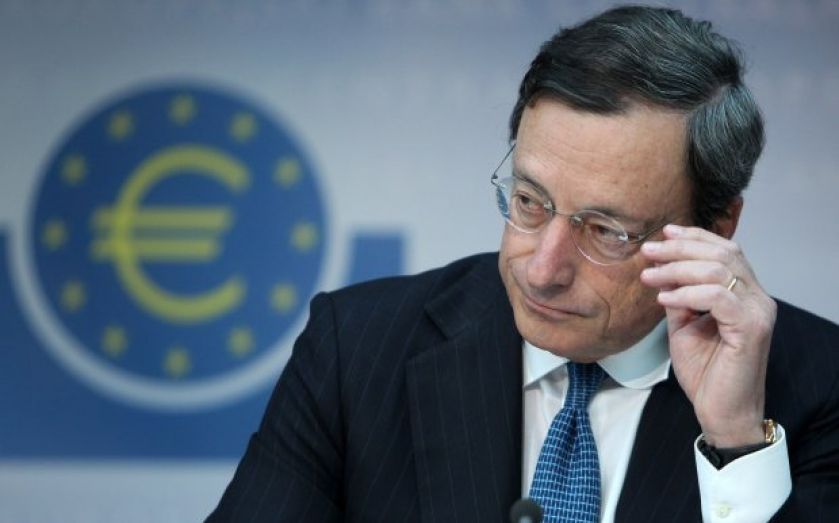 Draghi's comments come as the International Monetary Fund today did all but outright say that the ECB should begin to engage in asset purchases.

Today the central bank chief said that the ECB's council is unanimous in its support for using unconventional tools. Despite unveiling a punchy package of five measures in June – cuts to two key interest rates, and three other policy devices aimed at boosting lending – the ECB still has the tightest monetary policy in the G10.

Economy watchers fear that what is currently a disinflationary environment could become a deflationary one, as inflation in the Eurozone has remained well below the ECB's target, to maintain annual inflation at just below two per cent.

In a preview of today's speech, Societe Generale's global head of economics, Michala Marcussen, cautioned that monetary policy alone would not be sufficient to address the euro area's needs. The region requires structural reform, says Marcussen, who stresses that Draghi is singing from the same hymn sheet as Societe Generale.

"This is a message that Draghi has consistently delivered … one on which governments still fail to take sufficient action," she says. While taking questions from MEPs today, Draghi again stressed the need for labour market reform, saying that while we were seeing improvements in the Eurozone, unemployment still remains exceptionally high.

In his introductory statement, Draghi also highlighted a stronger euro as a risk to the currency bloc's recovery. Draghi said that exchange rate movements are "an important driver of future inflation", while maintaining that the euro's level was not a policy target for the ECB. "The appreciation that took place since mid-2012 had an impact on price stability," said the ECB president.

Draghi also took the time to respond to press rumours that he would be leaving the ECB. "I am at the ECB and I'll stay at the ECB, and all the rumours to the contrary, coming from some interested parties perhaps, are unfounded," he said.