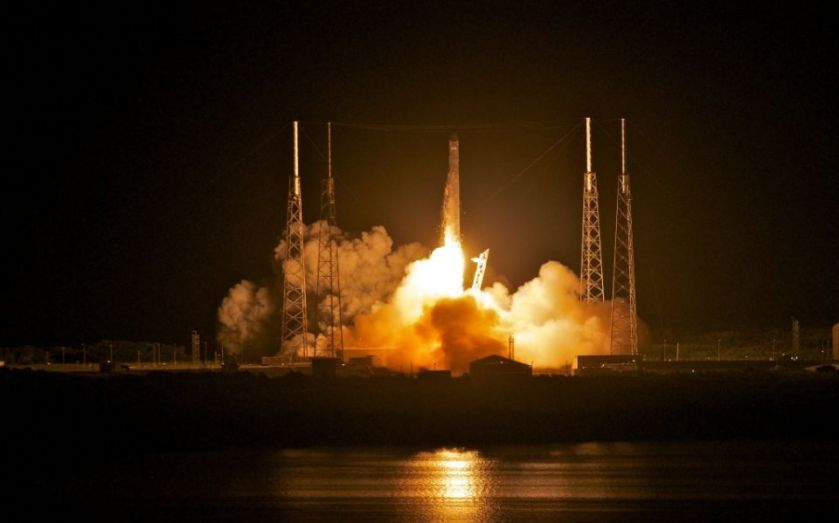 On Friday, SpaceX will attempt to return a rocket to Earth for the first time ever.

The Falcon 9 vessel will be launched into space, from where it will release its Dragon cargo spacecraft towards the International Space Station (ISS). It will then change direction and come back down towards Earth.
The attempted landing is expected to take place a few hours later, on an Atlantic sea barge just off the coast of Florida.
SpaceX was founded in 2002 by billionaire investor and Tesla Motors chief executive Elon Musk. Its purpose is to revolutionise space technology, with the ultimate goal being to enable people to live on other planets.
But the purpose of this particular mission is not space discovery – it is an attempt to bring down the cost of space travel for private companies and governments alike. Here's everything you need to know about today's rocket landing.

WHY IS THE ROCKET COMING BACK DOWN TO EARTH?

Normally, a rocket is destroyed as soon as it sends its cargo off in the right direction in space – segments either burn up when they enter the Earth's atmosphere or fall into the sea.
Now, SpaceX is trying to discover whether it could bring a rocket back down to Earth in a stable state, making it reusable for future missions.
To make this possible, the Falcon 9 has been adapted to withstand the harsh conditions of space – it has a simple, two-tier configuration which minimises the number of separation events, and its nine first-stage engines mean it can safely complete its mission even in the event of an engine shutdown.

WHY IS IT SO IMPORTANT FOR SPACE EXPLORATION?

Until now, an expensive new rocket has been required for every new space mission. If Friday's landing is a success, it could result in the reuse of rockets and the reduction of costs of all future launches.
This would mark a significant turning point in the cost of space travel for governments and private companies alike.
“A fully and rapidly reusable rocket – which has never been done before – is the pivotal breakthrough needed to substantially reduce the cost of space access,” SpaceX said in a news release.
The company added that treating rockets like commercial airliners would make much more sense, since these also cost millions of dollars but are able to “conduct tens of thousands of flights over a lifetime.”
“If one can figure out how to effectively reuse rockets just like aeroplanes, the cost of access to space will be reduced by as much as a factor of a hundred,” Musk said on SpaceX’s website.

WHY WILL THE LANDING BE DIFFICULT?

There's no guarantee the rocket's arrival will result in success – in fact, Musk estimates there is a 50 per cent chance the landing will fail.
Not only is it the first time something like this has been attempted, but the landing pad is less than 100m wide – normally, SpaceX works with a landing accuracy of around 10km.
On top of that, the location of the landing pad means the rocket will be at the mercy of waves and currents, and will have to use thrusters to stay steady.
SpaceX described re-entry and landing as "trying to balance a rubber broomstick on your hand in the middle of a wind storm".
"I'm pretty sure this will be very exciting, but, as I said, it's an experiment," cautioned Hans Koenigsmann, vice president for mission assurance at SpaceX.
"There's a certain likelihood that this will not work out all right, that something will go wrong. It's the first time we have tried this – nobody has ever tried it as far as we know."
That being said, SpaceX has already proven its ability to be the first to achieve things – in 2012, it became the first non-government vehicle to send a cargo to the ISS. Since then, it has made three flights there, both delivering and returning cargo for Nasa.