London’s ‘unsung bridge’ lights up to mark its 100th birthday 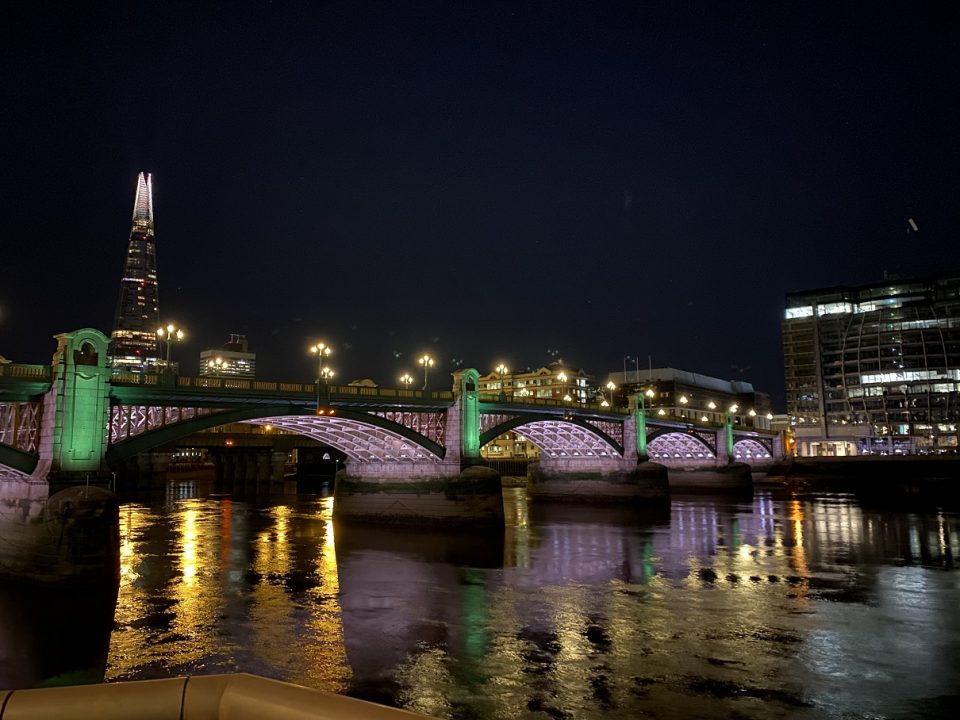 It has survived a bombing during the Blitz, witnessed tragedy on the Thames and appeared in a Harry Potter film… this weekend one of London’s unsung bridges marks its 100th birthday.

Unlike most centenarians, Southwark Bridge won’t get a telegram from the Queen, but it did receive a royal christening, opened amid pomp and ceremony by King George V on 6 June 1921.

Every evening this weekend, the bridge – which replaced an earlier, 19th century iron bridge on the same site – will be specially bathed in pulsing white light to mark its anniversary.

The crossing is one of five City bridges maintained by the City of London Corporation’s Bridge House Estates charitable trust, originally set up in 1097 to maintain old London Bridge.

“It may not have the history of London Bridge or the glamour of Tower Bridge, but for the past century Southwark Bridge has played a vital but unsung role in carrying generations of Londoners across the Thames into and out of the City.

“For nearly 1,000 years, Bridge House Estates has been bridging the gap for Londoners – both literally and, more recently, in terms of our work tackling social disadvantage and economic divides across the capital.

“We work 365 days a year to keep our five bridges in good shape – at no cost to the taxpayer – while our charity funding arm, City Bridge Trust, gives out over £25 million a year to projects supporting some of the most vulnerable people across the capital.”

Work on the new steel arch bridge began in 1913 but its completion was delayed due to World War One. It was built from Bridge House Estates funds at a cost of £375,000 – around half the cost of the original Iron Bridge built through private subscription a century earlier.

The special lighting of the bridge will be visible from 9.30pm tonight (Friday 4), Saturday and Sunday evening. To mark the centenary, a 100-second lighting cycle will repeat 100 times.

Southwark Bridge through the ages

– The new Southwark Bridge was opened by King George V, who used a golden key to open temporary barriers before driving across in a horse-drawn carriage, on Monday, 6 June 1921

– Five people were injured in an explosion on the old bridge in 1895, thought to have been caused by a discarded match or sparks from a horse’s shoe igniting gas from a leaking pipe

– The old bridge was mentioned by Charles Dickens in Our Mutual Friend and Little Dorrit, while its successor appears in 1964 film classic Mary Poppins and in 2007’s Harry Potter and the Order of the Phoenix, in which Harry and friends are seen flying towards the bridge on broomsticks.

– The bridge is 800ft long with a surface area of around 46,000 sq ft – the equivalent to around three and a half Olympic swimming pools

– It was given a £2.5 million facelift in 2011, when more than 1,000 tonnes of abrasive material was used to blast it back to its bare metal framework, before 13,000 litres of paint were used to repaint it in its original colours – yellow and its own special shade of ‘Southwark Green’

The opening of the new bridge in 1921 was described by Donald Maxwell, a reporter for The Graphic, who bribed a workman to let him onto the roof of a nearby warehouse to get a good view:

He wrote: “A burst of music floats across the river. The King has arrived, and is receiving an address from the hands of the Lord Mayor. Then he opens the gates with a golden key. A fanfare of trumpets and the Bishop of Southwark pronounces a benediction.

“The bridge is empty save for policemen standing to attention at intervals on either side of the roadway. The crowd at the Southwark end is silent and alert. But the river, with its lighters floating on the tide, can wait for no man, and the life of the Thames below is as active as usual. Indeed, one lighterman, who is having a struggle with the wind, is referring to the new structure unlovingly.

“A rider in red, and then the King and Queen drive over the bridge and a loud ovation greets them from the densely packed streets of the Surrey side. Other carriages follow, and at last public traffic commences. The first over is a taxi, and the King’s highway is open to all sorts and conditions of men.”