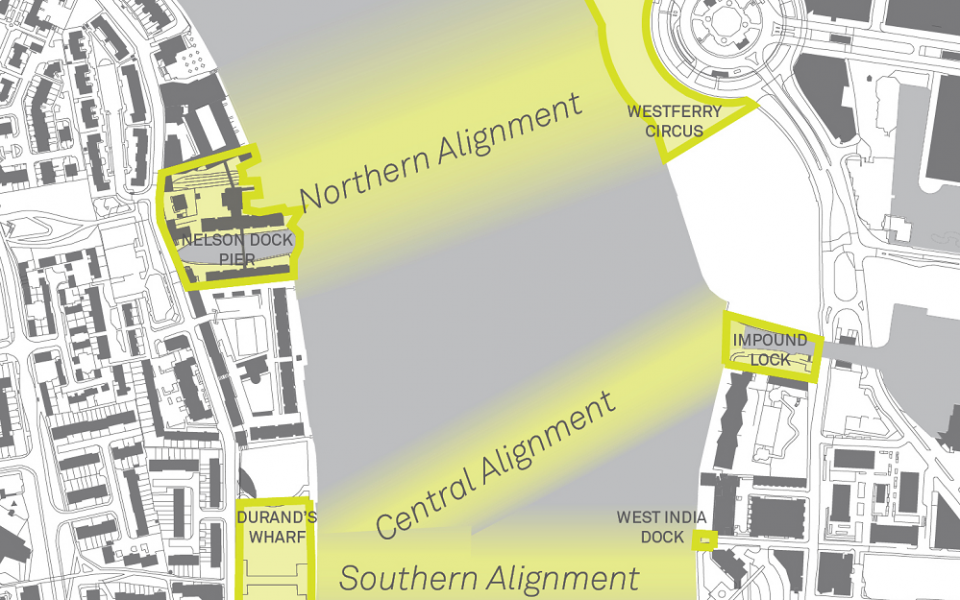 Plans for a new river crossing in east London progressed today with the launch of a consultation on the Rotherhithe to Canary Wharf bridge that will provide a pedestrian and cycling route across the Thames.

Over the past year, TfL has worked with engineering consultants Arcadis and Knight Architects, shortlisting three options including an enhanced ferry service, a bridge, or a tunnel.

Based on the studies carried out so far, weighing up potential benefits and impacts, the navigable bridge – allowing movement of boats on the river to continue – is the present frontrunner.

But this isn't yet set in stone, and TfL also wants to assess different aspects of the bridge, including its specific location, its height, and its overall design.

A higher bridge would mean it needs to open less frequently for river traffic, but would be trickier to access, whereas a lower bridge would face greater disruption by opening to allow more vessels to pass through.

How a higher bridge could look (Source: TfL)

The proposal is part of a wider package of river crossings planned by the mayor, and would provide a link for thousands of people directly between Canada Water and Canary Wharf.

The crossing would tie into existing and planned cycle routes on both sides of the river, and go towards helping the significant growth in east London in recent years.

Leon Daniels, managing director of surface transport at TfL, said it was "absolutely right" that investment is made into "new vital river crossings".

This new crossing is envisioned to be a fantastic addition to London and provide a valuable and accessible link to new and proposed walking and cycling routes on both sides of the river.

Once Londoners' views are compiled from the first consultation, Transport for London (TfL) plans to hold a consultation on the final preferred design next year, with the expectation that application for planning consents could get underway in 2019.

Val Shawcross, deputy mayor for transport, said: “This area of east London has seen huge growth in recent years, and our desire for a dedicated crossing for cyclists and pedestrians shows our real commitment to greener forms of transport across London.

"It will provide vital new connections to work, shopping and leisure facilities for thousands of local residents and provide a new route for commuters into Canary Wharf. We now want everyone to have their say before we outline further details of how we can make this ambition a reality.”

The step forward comes after plans to progress with another infrastructure project in the capital – the Silvertown Tunnel – suffered a setback yesterday, with the news the government was delaying its decision on whether to proceed with the tunnel under the Thames by another six months.