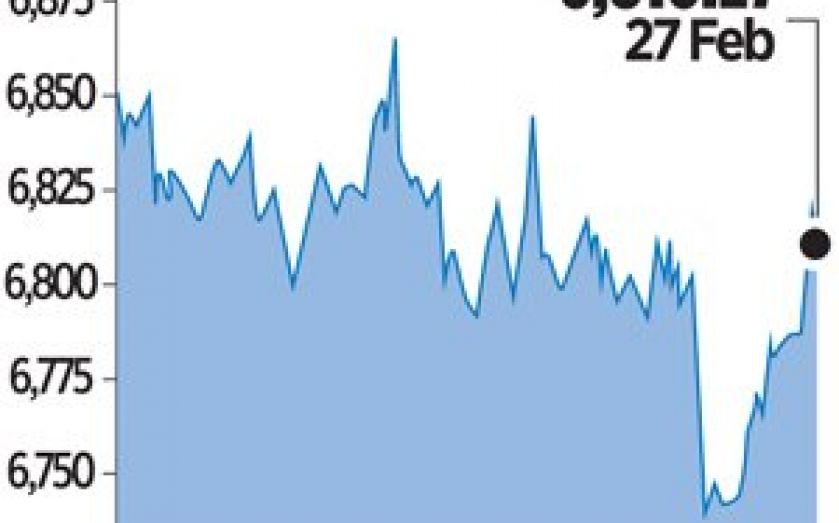 BRITAIN’S top share index edged up yesterday, lifted by positive US data and assurances from Federal Reserve chair Janet Yellen, despite a sharp sell-off in Royal Bank of Scotland and increasing tension over Ukraine.

RBS skidded 7.7 per cent as its new chief exec outlined plans for a large-scale overhaul after the mostly state-owned lender reported an £8.2bn loss.

Upbeat data on US manufacturing goods’ orders however helped the blue-chip index.

“The markets have edged higher on positive data from across the pond. US initial jobless disappointed but continuing claims and durable goods have helped sentiment,” said Amrit Panesar, a senior trader at Accendo Markets.

Investors also reacted to positively to Fed chair Janet Yellen’s testimony to the Senate Banking Committee. She said the Fed would be on alert to make sure recent signs of weakness in the US economy are due to cold weather and storms, and not signals of a more fundamental slowdown.

Weighing on world stocks was a report from Interfax news agency that Russian aircraft had been put on high-alert on the Ukrainian border.

“The involvement of Russia would be the bigger worry, that it’s going to lead to frosty ties with the EU and for the US with Russia,” said Will Hedden, sales trader at IG.

Capita was the day’s top performer, with shares in the outsourcing group surging 6.7 per cent after it posted a 14 per cent rise in annual profit.

The company said it was confident about 2014 after winning £588m worth of new contracts so far this year.

Shares in the world’s largest advertiser WPP were down 3.5 per cent despite reporting strong trading, with Liberum and Numis both raising concern over a hit to margins and lower margin guidance moving forward.

“The main reason for the downgrade is that WPP has taken down its longer-term margin improvement targets” Liberum said in a note, cutting the stock to hold from buy.

“While January has started well and the share buyback programme has increased, this does not offset the disappointing message on margin improvement,” it said.

Meanwhile elsewhere in Europe, stocks fared less well. The German Dax ended down 0.76 per cent, while Spain’s Ibex 35 lost 0.6 per cent. In France, the Cac 40 closed virtually flat, down 0.01 per cent on the day.