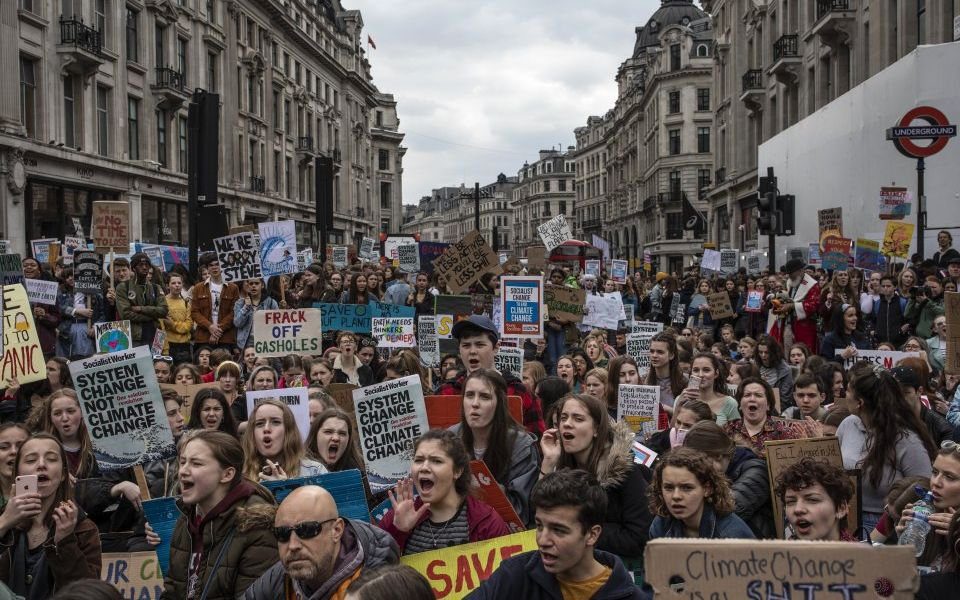 The protesters blocked Oxford Street at the intersection with Regent Street as the third nationwide climate protest turned into a march.

Queuing traffic spilled over into delays along Regent Street from Piccadilly Circus, and southbound from Langham Place, Transport for London (TfL) said.

Other routes were also affected by the demonstration by the UK Student Climate Network, which started in Parliament Square at 11am.

The students began marching towards Trafalgar Square before making their way towards Oxford Circus.

⚠ DEMONSTRATION ⚠ Due to another demonstration taking place, Oxford Street is completely blocked at the junction with Regent Street, outside Oxford Circus station. Traffic is slow in the area. pic.twitter.com/yKC4RqQXxQ

This is not the first time that the climate strikes have brought traffic to a standstill in London, as the two previous marches saw a combined 70,000 young people take to the streets in February and March.

Today, teenagers played truant to not only reiterate their call for a climate emergency declaration, but also call for the adoption of a Green New Deal.

The idea of a Green New Deal has been popularised by US congresswoman Alexandria Ocasio-Cortez, and it aims to fight climate change and economic inequality at the same time.

Anna Taylor, co-founder of the UK Student Climate Network, said: “We need you to act to protect people and planet, at the same time as creating a better world for everyone.”

“That’s why we’re calling for a Green New Deal in the UK to do just that,” Taylor added.

The walkouts were inspired by Greta Thunberg of Sweden, who first started leaving school to protest in August. Thunberg has since been nominated for a Nobel Peace Prize for her efforts.

The march today differs from previous ones in that Letters to the Earth conducted a reading to close the protest at 1pm in Oxford Circus.

Letters to the Earth selected letters from more than 1,000 submissions to read out, including writings by Yoko Ono, poet Kate Tempest, Nina Segal and more.

“Ours is a cultural response to the Climate and Ecological emergency that we invite others to be a part of,” Kay Michael, an organiser and director at Letters to the Earth, said.

Letters to the Earth is part of a larger project to brings the arts and culture community together to address the climate emergency, called Culture Declares Emergency.

Read more: The cheek of it: Climate activists strip off in parliament

It comes ahead of a wider protest by Extinction Rebellion in London and other cities scheduled for Monday.