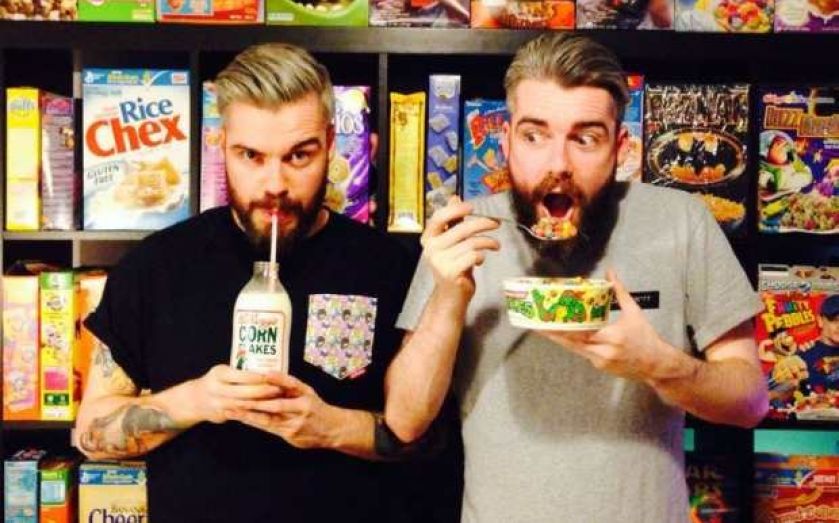 Forget the "weather bomb" – if you're in the capital and you're partial to grains, today's biggest story is the opening of Cereal Killer, the new London cafe that serves nothing but cereal.

According to owners Gary and Alan Keery – identical, bearded twins – the Brick Lane venue is a "nostalgic cafe displaying hundreds of pieces of memorabilia from the 80s and 90s", designed to "give you the real sugar rush feeling you had when you were a kid".

Diners can choose from over 100 different types of cereal, with a 12 varieties of milk and 20 different toppings from banana to marshmallows – all for £2.50 a bowl.

So far, things haven't boded brilliantly – the twins tried to crowdfund the project, but couldn't get the donations they needed. Nevertheless, the attention they garnered from the campaign helped them get rent and a loan.

But what if cereal ain't your bag (/box)? Never fear, coffee fans: there are plenty of other gimmicky cafes for Londoners to sample…

Opened in April this year to a two-month waiting list, this Shoreditch cafe allows diners to "relax with a cup of tea" while cuddling a kitty. The cat cafe idea came from Japan, where various restaurants allow diners to play with puppies, get cosy with cats or even stroke owls – but over here, animal welfare charities tend to be more vocal. Lady Dinah's has been criticised by Cats Protection as "not suitable for domestic cats" – although the cafe's cats have already received fanmail from as far away as the US. So it can't be all bad for them…

If You're in London You Might Want To Check Out Ziferblat London: The New Anti-Café: http://t.co/G6UNTBJFWU #cafe pic.twitter.com/jS2Pqxgbr7

Old Street-based Ziferblat, part of a Russian chain of "anti-cafes", takes the phrase "time is money" rather more literally than most, charging customers 3p a minute for a seat, but offers free wifi and cups of tea and coffee. Launched in January this year, the cafe also offers classes including art and yoga, and acts as an exhibition space.

Vapers have been given a hard time by the EU, which wants e-cigarettes to be regulated like medicine. But that hasn't put off the owners of the Vape Lab on Shoreditch High Street, London's first "ecigarette coffee shop", where you can enjoy a latte and browse the latest vaping innovations – including "Christmas"-flavoured e-liquid. The cafe also takes full advantage of its Tech City location: on Tuesdays it hosts meetings for London's Bitcoin community.

Considering its hipster connotations, it's a bit of a surprise that Drink, Shop & Do, on Caledonian Road, is the only one on our list outside east London. The cafe allows customers to indulge their crafty side with regular classes on everything from "Inappropriate Christmas Card Making", to coffee tasting and tea-towel screen printing. It also has a shop, where aspiring crafters can stock up on supplies. The cafe, which launched in 2009, expanded in January this year – Drink, Shop & Dash, next door to the main cafe, offers coffee on the go.