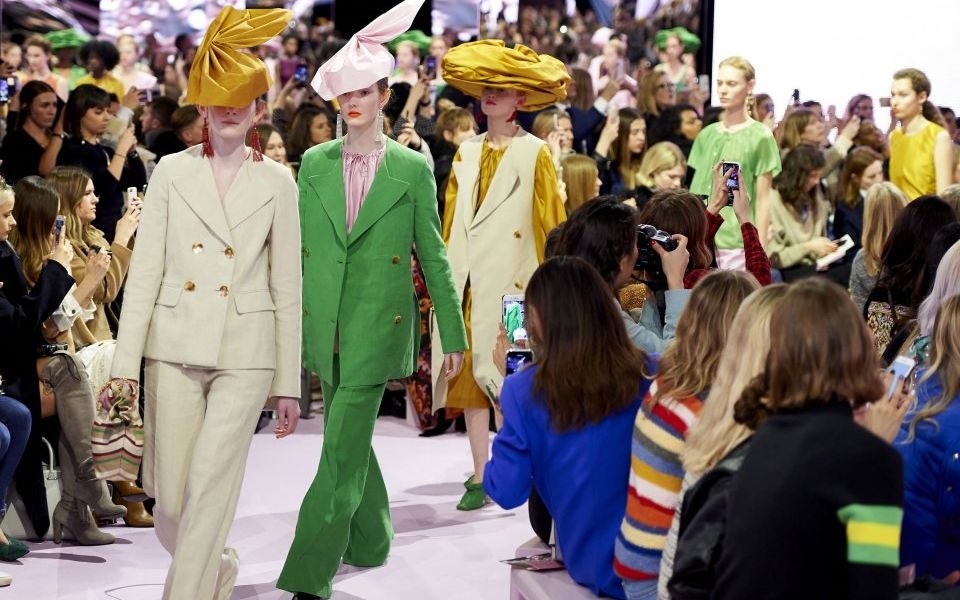 You might be hard-pressed to identify anyone sat on the front row at Mulberry’s spring/summer fashion show last Friday.

Once the reserve of top buyers and the fashion press elite, the front row has undergone a revolution in the past decade. Actresses and models sat shoulder to shoulder with a new breed of fashion VIP: the all-important digital influencer.

This is all part of what Thierry Andretta, Mulberry’s chief executive, sees as a democratisation of the industry.

“It's different because this show is going more to the consumer,” he told reporters backstage after the show.

Having taken over Spencer House, a beautiful Georgian property in Mayfair, the brand spent this past weekend pushing its message to potential shoppers. “You have the opening of the show, but we are staying here for two more days putting on workshops,” Andretta explained. “We will be able to reach consumers who want to see Mulberry.”

Fashion week used to be all about the powerful middlemen: editors and buyers. Brands needed to woo these people in order to get their products in front of consumers.

Now the invitation is an open one. Members of the public could book the Mulberry workshops on a first-come, first-served basis, while the influencers who attend shows are throwing the fashion world’s locked doors wide open to their millions of followers via Instagram.

For Mulberry, keeping up with that pace of change meant changing the model of how their clothes are sold. Instead of previewing products which would be available in the shops months down the line, everything in Friday’s event was available to buy online as soon as the first model set foot on the catwalk.

“It's an interesting way to change approach,” said Andretta.

But many would argue that fashion week’s transformation has also made it pointless. Mulberry and other designers had already previewed collections to the fashion press and buyers several months before the show. Then there is the expense. Shows like Mulberry’s – which featured a moving set and a performance by the singer Goldfrapp – do not come cheap. So what is the point of fashion week?

It’s a question some brands have asked themselves and been unable to answer in recent years. DKNY opted to replace its New York Fashion Week appearance with showroom appointments last year, while this season has seen TopShop withdraw its long-running London Fashion Week show.

So if buyers can be courted through private meetings and consumers can be reached on social media, what’s the point?

The best answer offered by the shows so far this fashion week has been reaching out to a wider audience.

While some brands feel they need to retreat in order to maintain exclusivity, others are using Fashion Week as a platform to signal their inclusivity.

During London Fashion Week in September, Burberry threw open the doors of the Old Sessions House in Clerkenwell for a free exhibition which included the chance to view the newest collection up close. It was an invitation to a new, younger audience to experience what the brand was about.

Ahead of this season’s fashion week, Burberry announced a partnership with online retailer Farfetch, giving shoppers in 150 countries access to its goods. The deal kicked off over the weekend with an around-the-clock delivery service in London for the 24 hours following Burberry’s show.

It was a fitting note to end creative director and former chief executive Christopher Bailey’s tenure at the brand. He used his final collection to embrace diversity and inclusivity, weaving the LGBT pride symbol of a rainbow through the garments and even incorporating it into Burberry’s legendary check print.

Burberry’s return to London in 2009 after showing in Milan helped to cement the UK as a serious player in the global industry.

These days London’s reputation as a tech hub as well as the home of the original fashion rebels such as Mary Quant and Vivienne Westwood makes it the natural leader of this change in how we think about fashion week.

In more recent years, the establishment has lent a hand; Theresa May held a fashion week party in Downing Street, while London Mayor Sadiq Khan has incorporated the event into his London is Open message.

This year, the Duchess of Cambridge – whose fashion choices are followed the world over – will even host a reception at Buckingham Palace.

All this serves as a stamp of approval on the new direction which fashion is taking. As brands open up their appeal, so the recognition of this $2.4 trillion (£1.7 trillion) industry as a serious business is growing.

Fashion week still has a part to play, but that role is changing. Whether it’s putting social media professionals on the front row, making collections instantly shoppable, or holding public events, brands are still finding ways to make fashion week worth the hassle.

Read more: Why the UK is falling out of love with fashion