By Alistair Strang from interactive investor.

Lloyds shares remain in a static state. Our chartist runs the numbers again hoping for a catalyst.

Instead, we opted for the coward's route, suggesting it was probably going to be stuck in a state of flux until a Brexit solution appeared. Guess what, this appears to be the case! 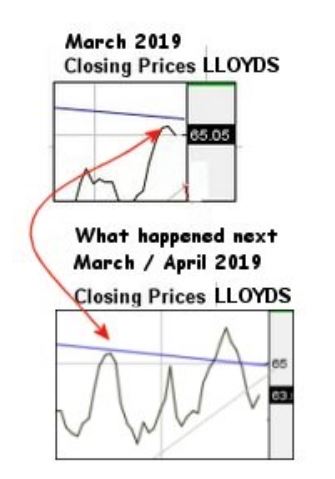 Source: Trends and Targets Past performance is not a guide to future performance

As the Lloyds share price "closing price" charts show, the share managed to briefly break trend, with the market opting to stuff the share below the blue line.

This tends to confirm our suspicion that the price will doubtlessly start some oscillation, ideally giving a trading range which will prove useful as we await politicians doing the job they are paid to do.

It often feels the TV show, "The Apprentice" could do a better job of things, giving a bunch of publicity-hungry hopefuls the task of managing a settlement with Europe.

If our suspicion is correct regarding Lloyds, weakness now below 63p should prove capable of reversal to an initial 60p. If broken, secondary is now calculating at 57.5p and remains a point at which we'd hope for a bounce.

Theoretically – and visually – it will make sense for a bounce to head to 64p before again experiencing some reversals. This will give a reasonable trading range until Brexit nonsense is sorted, one way or another.

To adopt a tone which approaches optimism, Lloyds' share price now requires to trade above 67.8p, this apparently now permitting growth to an initial 70.75p with secondary, if bettered, a longer term 74p.

Visually, there is an implication any rise foolish enough to hit the 74p level will find itself restricted by a glass ceiling which has existed since 2015. Only with closure above such a point will be genuinely adopt a stance of hope for the future. 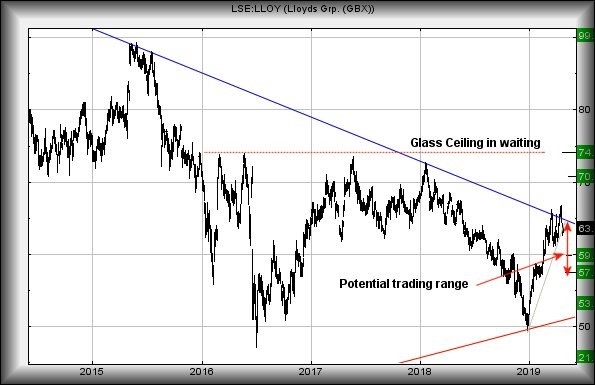 Source: Trends and Targets Past performance is not a guide to future performance

Alistair Strang has led high-profile and "top secret" software projects since the late 1970s and won the original John Logie Baird Award for inventors and innovators. After the financial crash, he wanted to know "how it worked" with a view to mimicking existing trading formulas and predicting what was coming next. His results speak for themselves as he continually refines the methodology.

Alistair Strang is a freelance contributor and not a direct employee of Interactive Investor. All correspondence is with Alistair Strang, who for these purposes is deemed a third-party supplier. Buying, selling and investing in shares is not without risk. Market and company movement will affect your performance and you may get back less than you invest. Neither Alistair Strang, Shareprice, or Interactive Investor will be responsible for any losses that may be incurred as a result of following a trading idea.

These articles are provided for information purposes only. Occasionally, an opinion about whether to buy or sell a specific investment may be provided by third parties. The content is not intended to be a personal recommendation, and is not provided based on an assessment of your investing knowledge and experience, your financial situation or your investment objectives. The value of your investments, and the income derived from them, may go down as well as up. You may not get back all the money that you invest. The investments referred to in this article may not be suitable for all investors, and if in doubt, an investor should seek advice from a qualified investment adviser