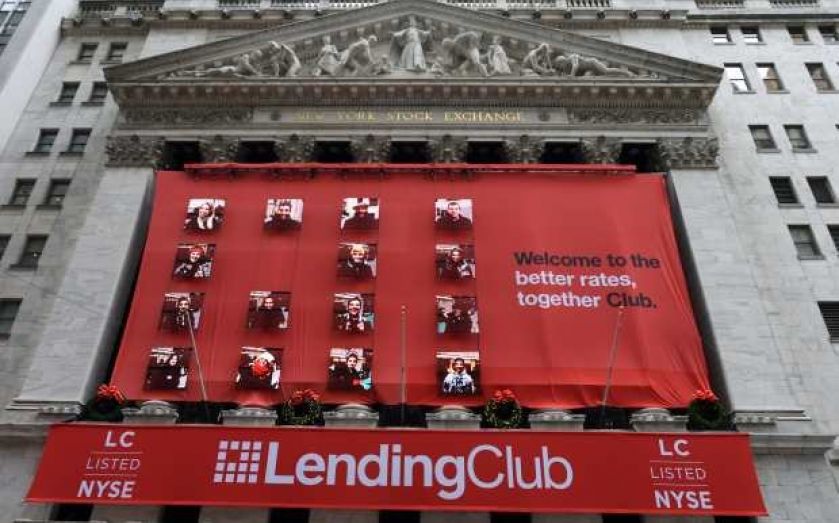 Lending Club is a US-based peer-to-peer (P2P) lender. It acts as a conduit for the passage of money from individuals and institutions to businesses. Some call that crowdfunding – though increasingly that term is being reserved for platforms that raise money for equity, or property investment, or special purposes such as charity.
Whatever you call Lending Club, it’s the world’s biggest animal of its sub-species, and it’s coming to the US stock market. The bankers masterminding the flotation have priced its initial public offering (IPO) at $15 a share. That prices the company at $5.4 billion (£3.4bn). Not bad for a business which has just celebrated its seventh birthday. Lending Club has just reported net loss of $23.9 million for the nine months to 30th September, compared with a profit of $4.4 million the year before. Revenue has more than doubled to $143 million.
There’s good news and potentially bad news in this IPO development.
The good news comes in the form of one certain consequence of the market appetite for the P2P sector. A massive price tag means people will finally take notice of a fast-expanding sector. Survey after survey measures consumer “awareness” – whatever that really means – of the P2P market. And survey after survey demonstrates many people, even if run over by a bus with “P2P business lending” emblazoned on the side in yard-high day-glo capitals, still wouldn’t be aware of it.
So the Lending Club flotation will make people in the US and the UK sit up and take notice. There’s a good chance purses and wallets will open. Perhaps some of the £1.4 trillion (according to Building Society Association figures) that sits on bank deposit earning miserable rates of interest might be channeled into helping small and medium-sized business grow. Savers earning less than a percentage point of interest will become lenders earning six to eight per cent (and these are the more conservative P2P business lending sites, such as Money&Co.). Merry Christmas, one and all.
The bad news is there’s a “Bah! Humbug!” element to all of this. The $5.4bn price tag reflects every dollar loaned by Lending Club so far – and maybe even a little more. So every dollar loaned out means a dollar on the IPO valuation. Imagine taking a tenner in a pub from a friend, putting it in your wallet, then taking it out and handing it on to a friend sitting on the other side of you. The first friend has loaned the money. The second one has borrowed it. And your wallet, by virtue of brokering the transaction, is worth a tenner too.
Nice work if you can get it. If you can, you’re probably an investment banker.
Now this is a deliberately simplified – some might say simplistic – model of P2P lending activity. P2P lenders really are doing the jobs that the banks can’t or won’t do. Businesses need the capital, and savers deserve a much better return than the deposit accounts offer – so lending to fuel growth and get an excellent yield is a double win.
But this aggressive pricing of Lending Club is just that – aggressive. The bankers behind Lending Club’s IPO have played the media like a knackered trout. They were going to price this asset at nearer $4 billion than $5 billion – still a huge price. But now the financial rabbit has been pulled out of the hat, and here’s Lending Club – fluffy, cute, and possibly just a bit too expensive for its own good.
Perfect market theorists argue that the market will be the ultimate arbiter. What’s something worth? What the market will pay for it. After all the rationally relevant information has been priced in, the market will determine fair value.
It would be difficult to argue with that. The horrendous bubble in technology stocks – created by the greed of investment bankers and investors alike – finally burst in March 2000 (not long after the IPO of lastminute.com). The market had its say.
It will have its say with Lending Club – and then, pretty soon, with Funding Circle, and maybe a few other UK-based P2P lenders. If Lending Club proves to be overpriced, it will damage confidence in the price of the stocks, and – unfairly – in the P2P lending sector itself.
It is to be hoped that the market finds Lending Club’s valuation fair from the get-go. But hope rarely triumphs over expectation.