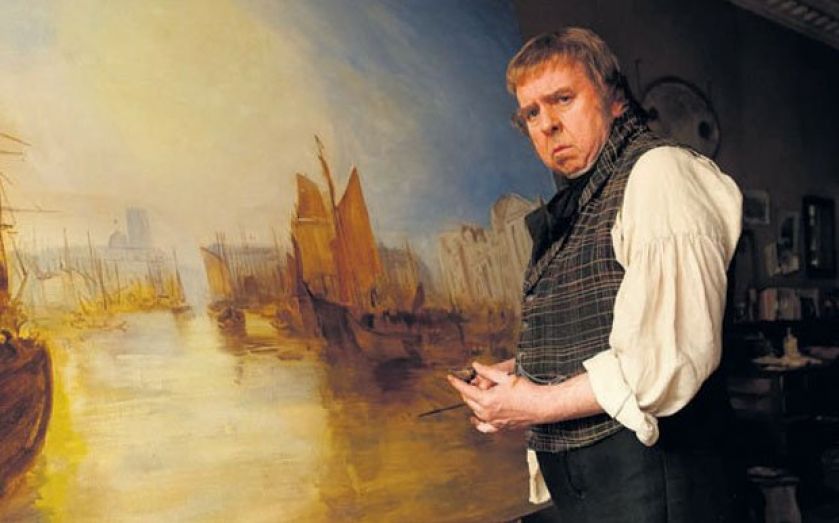 François Truffaut once suggested that there’s something about England’s countryside – “The subdued way of life, the stolid routine” – that’s “anti-cinematic”. If only he’d lived to see Mike Leigh’s latest movie, which is about all of these things and yet is a film of the utmost eloquence.

Mr Turner is not concerned with the tortuous procedure of artistic creation. Nor is it a biopic of the painter-as-flamboyant genius, Caravaggio-style. It is a portrait of an unlovely man who happens to produce extraordinary paintings. Turner may have been one of our greatest landscape painters, but in Leigh’s reading he wasn’t much cop as a companion: gruff, impassive and prone to grunting where others normally speak. We see him paint, dine, reluctantly converse with patrons, and sojourn in his beloved Margate. Hardly the stuff of soaring period melodrama. Yet the film triumphs, for two reasons.

The first is Timothy Spall’s hugely sympathetic central performance. He plays Turner with great restraint, hinting at his troubled soul with an economic delivery of growls and frowns. With a curt harrumph, he can suggest relief, anger or malaise; with an involuntary shake of the wrist, he conveys a chasm of regret. In the absence of a detailed backstory or grand moments of catharsis, we hang on these gestures, for they are the only exposition we get. Spall is aided by a strong supporting cast and a witty script that incorporates period vernacular without stooping to hackneyed “prithee” and “verily” territory – but it remains his film.

The second is Dick Pope’s sumptuous cinematography. Leigh’s past films have often been visually rather static; no such charge can be levelled at Mr Turner, which takes a meticulously realised Victorian London and lustrous Turneresque landscapes, while wisely resisting the temptation to recreate the painter’s tableaux. The opening scene, which pits his small silhouetted figure against the sublime Dutch flats, says everything we need to know about this lonely man. Turner’s romantic bond with nature is one of the few certainties here. In a way, Mr Turner is an anti-biopic, for its subject is no less opaque at the end than at the outset. “I do not know you, Mr Mallard,” says a companion, employing one of his several pseudonyms. “But I believe there are things about you that I cannot understand.” This film doesn’t try to understand: it embraces the man in all his strange ambiguity, and therein lies its richness.

The Overnighters ★★★★☆
A moving documentary about unemployment in the tiny oil boom town of Williston, North Dakota, which has won unanimous praise from critics

In the shimmering darkness of after-hours LA, a race is taking place. There’s been a violent car-jacking, and ambulances and police cars scream through the night to make it to the scene on time. With the same haste, but without the good intentions, local news stringers also push pedal to metal.

An agile driver and a fast learner, Jake Gyllenhaal’s Lou Bloom possesses a number of skills that make him suited to stringing. What really gives him an edge, though, is something he lacks; a restraining moral sensibility, a conscience, shame. On his first amateurish assignment, he brazenly breaches a police cordon, muscles through a group of frantic paramedics and shoves his camera into the bloodstained face of a shooting victim as he breathes his final breaths.

Bloom’s deep-set, unblinking eyes (it’s a terrifically creepy performance from Gyllenhaal) see everything and nothing. The tragedy, the desperation, the terrifying thought that these stabbings, murders, accidents, assaults could happen to any of us at any time; none of these things occur to him. And that’s why he’s so good. With the help of his downtrodden “intern” (Riz Ahmed) he takes the nighttime beat by storm.

Every morning Bloom deposits a gory video into the hands of Nina (played with retro glamour by Rene Russo), editor of the KWLA breakfast news show. A frisson of sexual chemistry hangs in the air between them, but the real aphrodisiac is the prospect of higher ratings for her, and a fat cheque for him. “Think of the perfect newscast,” Nina says, “as a screaming woman running down the street with her throat slit.” It’s a suitably dark sentiment for a film that’s more thriller than horror but disturbs us nonetheless by holding a mirror to our own salacious appetites.

Rarely has there been such a literal interpretation of the word “noir”. Nightcrawler recoils from the light like a vampire with a hangover, but the darkness in which it dwells is seductively shiny, lit up with neon and the laser glint of street-lights on car bodywork. There’s the brooding violence of Michael Mann’s Collateral and the posturing of Nicolas Winding Refn’s Drive, but unlike both those films, at no point during any of the nocturnal car-chases does style ever threaten to overtake substance.

Horns is a children’s fairytale in the Hans Christian Andersen mould, combining a dreamy, childlike tone with jarring moments of gory violence. It has something of the Pan’s Labyrinth about it, but where Guillermo del Toro’s film never flinches from its stygian vision, Alexandre Aja’s has a perpetually arched eyebrow.

It follows Ig (Daniel Radcliffe), a smalltown hick who somehow bagged the local babe (Juno Temple, whose remit never stretches beyond “archetypal girl next-door”). Then she gets murdered and everybody thinks he did it and he inexplicably grows a pair of horns. Sometimes you can’t catch a break.

The horns come with side effects – people feel the need to brag to him about their sins, act out their indecent fantasies (“I’ve always wanted to show everyone in this bar my d**k”) and do anything unpleasant he asks of them. Do you think these skills could help Ig work out who killed his girlfriend?

There’s plenty of Biblical symbolism – snakes, pitchforks, crucifixes, horns – but they feel more like the results of a brainstorming session than an integral part of the narrative. Ig can command snakes. Why? He just can.

It feels like it wants to be an allegory, but to what end is unclear; “don’t trust anyone because people are all pretty unpleasant” doesn’t feel particularly enlightening.

That Aja makes no attempt to explain how Ig’s powers work goes in his favour – it means you never ask too much of Horns; it’s silly and surreal and you just accept it, in the same way Ig’s friends and family just accept that he’s grown a gigantic pair of devil horns.

The set pieces are slick – a brutal brawl among the gathered media springs to mind – and it consistently entertains until the final 25 minutes, when too much weight is piled on the threadbare pseudo-religious premise. That it descends into sugary sentimentality feels like a cop out for a movie whose overriding tone is one of irreverence.

PHOTOGRAPHY
STEICHEN AND SASSEN
The Photographer’s Gallery | By Alex Dymoke
★★★★★

Three quarters of a century before Miles Aldridge’s candy-coloured domestic hell and Viviane Sassen’s studied flamboyance, Edward Steichen was already blurring the boundary between fashion photography and art. Far from mere adverts for clothes, Steichen’s out-there photography playfully disregarded a rulebook that was just beginning to take shape. Through his lens, the sculptural symmetry of interwar dress took on an almost avant garde quality. Even the stiffest formal wear looked fluid and feminine, glamorous and – whisper it – sexy. Some of his images could be stills from Lady Gaga videos, with models contorted into poses that challenge conventional notions of attractiveness. It’s photography as theatre, a formula enthusiastically taken up by the fashion world in the subsequent decades. Placing his pictures alongside the work of one of his inheritors, Viviane Sassen, shows just how much of a visionary Steichen was.

By the time John Ford’s masterpiece was first performed, audiences had already been subjected to gouged eyes, poisoned Bibles and brains bashed out on cages. Yet there’s little that could prepare them for ‘Tis Pity, whose deceptively light opening gives way to a brutal succession of gruesome horrors.

Michael Longhurst’s production is much more than a gore-fest, although it is also that. It’s a depiction of a coolly commercial world, an indictment of furtive scheming. And it’s also an impassioned love story, albeit one where the lovers are siblings.

Said couple, Annabella (Fiona Button) and Giovanni (Max Bennett), form the play’s emotional core. When we see them nude, embracing in bed, it feels more tender than prurient. Ford doesn’t rail against their incestuous acts, but rather casts them as doomed by their unquenchable ardour.

The whole ensemble works with a kinetic physicality, to both comic and tragic ends. Bergetto (James Garnon)’s adept slapstick rides high over the early acts, while a later scene of domestic abuse is genuinely harrowing.

The period-inspired costume helps to highlight Ford’s text, which here has space to reveal its complexities. The plainness of Ford’s verse, shorn of Shakespearean conceit, grants the play a startling lucidity. His signature trick, sequences of escalating staccato phrases, make his language all the more direct. Spells of nightmarish imagery heighten the sense of unease.

Longhurst must be praised for utilising the Sam Wanamaker Playhouse to its full potential. With the candles gradually unlit, the scene comes to resemble a chiaroscuro painting; the astounding finale, set around a banqueting table, could be a scene from a Rembrandt. This is a confident opener for the theatre’s second season, and a bravely sensitive reading of a play so often reduced to ludicrous sensationalism.

VAUXHALL PLEASURE GARDENS FIRE FESTIVAL
Last year a crowd of over 4,000 people descended on the Pleasure Gardens for fireworks, traditional Halloween activities from around the world and the first bonfire in the park for fifteen years. This year it’s on Friday 31st and it’s sure to be even better. Free, visit vauxhalltrust.wordpress.com

SUBTERRANEAN SCREAM
Delve into London’s dark and spooky side at the London Transport Museum’s Friday Late Hallowe’en special. Get your face painted by a professional makeup artist and enjoy the 2-4-1 offer on the special Halloween cocktail for the night. No kids, adults £10, ltmuseum.co.uk

FOUND HORROR SERIES
House DJs George Fitzgerald and Mano Le Tough would always be a great night out but with everyone dressed up for Halloween this is sure to be even more memorable. £22.50, visit residentadvisor.net

SPOOKTACULAR TIMES IN GREENWICH MARKET
One of London’s best loved markets is getting a makeover this Halloween. Scary stalls, ghoulish music and pumpkins are sure to make SE10 spookier than ever. For kids there’s a magic show and more. Free, visit greenwichmarketlondon.com