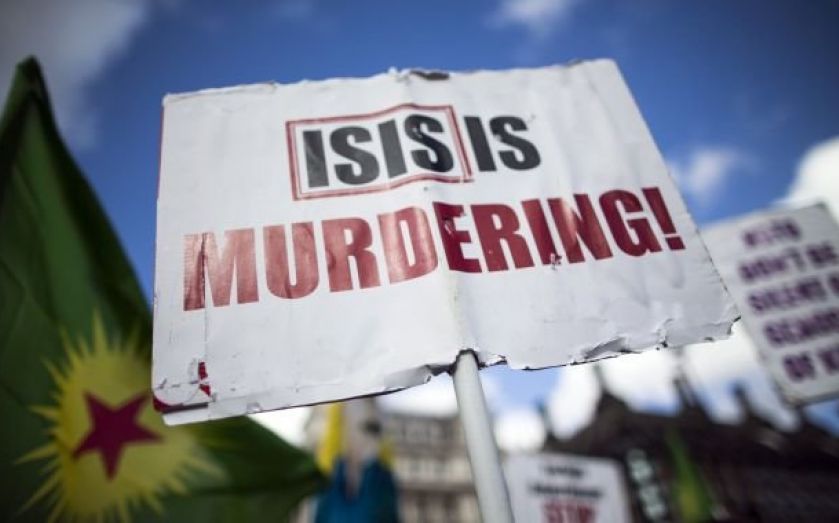 Anti-Islamic State protesters have taken to London's streets yet again, in demonstration against the terrorist group as it attacks Kurdish town Kobani – and the lack of support from Turkey.
Protesters have marched on Downing Street and are planning another demonstration outside St Pancras this evening, according to the Facebook page of Soas' Kurdish Society.

They are marching in protest over the lack of support given to Kobani since Islamic State – also known as IS, Isil and Isis – entered the town on the Syrian-Turkish border. In particular, they are demonstrating about Turkey's lack of help.

MPs voted a fortnight ago to take part in air strikes against Islamic State – but only over Iraq. However Prime Minister David Cameron has not minced his words when it comes to the terror organisation, particularly after the murder of taxi driver Alan Henning at the weekend.
Yesterday more than a thousand protestors took to the streets, marching from Dalston to Seven Sisters, as well as in central London.
Kurdish activists temporarily forced police to close Oxford Circus at lunchtime, after blockading the Tube entrance.
Newsweek reported that one of the organisers of the protest said it was “to appeal for more support for Kurds fighting IS”.
However their call fell on deaf ears – according to the same report, some commuters shouted that the protesters were “exactly like Isis”.
Undeterred, the demonstrators were back out on the streets today, blocking traffic around parliament this afternoon.
Soas' Kurdish Society claimed traffic had been blocked for more than an hour, and central London was “at a standstill”.
The page also advertised another demonstration as taking place outside St Pancras Station at 5pm tonight – so watch out if that's your commute home.

Despite the numbers, the protests look remarkably more peaceful than those taking place within Turkey itself, where 14 people have died.