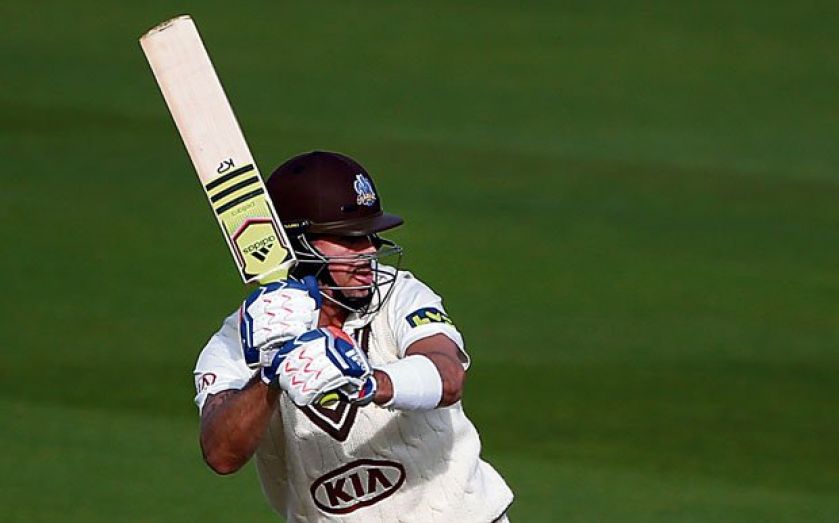 ENGLAND’S new director of cricket Andrew Strauss will today be grilled on whether mercurial batsman Kevin Pietersen has an international future after showdown talks last night.

Pietersen issued a reverberating reminder of his match-winning credentials by smashing a career-best and maiden triple century against Leicestershire at the Kia Oval yesterday. His unbeaten knock of 326 contained 34 fours and 14 sixes.

The 34-year-old was due to meet Strauss and England and Wales Cricket Board chief executive Tom Harrison last night and, while there has been no official confirmation, Pietersen’s hopes of an international renaissance appear slim.

Pietersen’s timing ensured maximum impact. His adversary Strauss, with who he has endured a fractious relationship, is set to hold his first press conference in his new role at Lord’s today.

“What more can I do? I’m ready to play for England,” said Pietersen, who is England’s leading run scorer across all formats of the game, after his remarkable innings.

“I knew there was a lot of pressure on me today because Straussy has his press conference tomorrow and that’s why I’m so proud of what I did today.

South Africa-born Pietersen’s international future has become an increasingly prominent issue to resolve for Strauss, who has consistently stressed the importance of the England team evolving without the presence of the hard-hitting right-hander.

The clamour for Pietersen’s England return intensified in the wake of yesterday’s events, however, with long-time proponent Michael Vaughan and fellow ex-England skippers Alec Stewart and Andrew Flintoff calling for his 15-month international exile to end.

Pietersen has been in the international wilderness since his sacking in February 2014 following the Ashes whitewash Down Under, having been described as “disengaged” by then ECB managing director Paul Downton.

Strauss is expected to lead tomorrow’s discussions regarding England selection for the two-Test series against New Zealand, which starts at Lord’s on 21 May, before the squad is finalised on Thursday.

HOW COULD IT WORK?

■ Are there places available in the England XI? England’s main batting issue is at opener following the failed experiment and international retirement of Jonathan Trott

■ What about the other batting positions? Gary Ballance, Ian Bell and Joe Root all notched centuries in the West Indies. Root looks a mainstay. The collective failure of the middle order in the last Test in Barbados inevitably raised the Pietersen question

■ Is time running out? Pietersen had to fire this week. But if all England batsmen find form against New Zealand it could aleady be too late