I have never done an interview with a cat on my lap before.

Luckily, Julie Barnes and Kathrin Burckhardt, who are talking to me via Skype from London and Berlin, don’t seem to mind that she wants to get involved. In fact, their cats – or “fur-babies”, as Barnes calls them – are present too.

These are the entrepreneurs behind Cat In A Flat, and for them, cats are part of the family.

Cat In A Flat is a simple premise: an online platform that matches owners with potential sitters in their local area. But not just any sitters – sitters who really love cats.

Gone are the days of putting your disgruntled moggy in a soulless cat shelter when you go on holiday, or asking reluctant friends or neighbours to check in.

Both parties sign up for free, with sitters listing their experience levels, controlling their availability, and setting their own rates – which tend to range from about £8 to check on and feed a cat once a day in London, to around £50 for an overnight stay. There’s no subscription fee – instead, the business takes a cut of each transaction.

Basically, think of it as Airbnb for cats, says Burckhardt.

It goes without saying that the duo are both avid cat-lovers. But they’re also digital experts, and were colleagues before they were business partners.

The inspiration for Cat In A Flat came from Barnes’ own “grumpy cat”, who was a bit too feisty for neighbours to look after. She realised that she needed to find a network of cat-loving potential sitters.

At the time, the pair were working together in the web industry, building platforms for companies like Unilever, Coca-cola, and Blackberry.

“We had the problem of finding cat-sitters, we had the skill set, so we decided to put those two ingredients together and build something.”

So in 2015 they launched Cat In A Flat. It started off as a sabbatical for both founders, who self-financed, then raised investment from friends and family. Once they were passed the proof-of-concept stage, they said goodbye to their jobs and went full-time.

Since then, growth has been impressive. Cat In A Flat is now active in seven UK cities, as well as Austria, Germany, the Netherlands, and the Republic of Ireland.

The business model is pretty straightforward. But just as homeowners were reluctant to list their vacant houses on Airbnb at first, wasn’t it hard to convince people to trust a stranger with their precious pets?

“The difference between Airbnb and our service is that you get to know the sitter before you leave,” Burckhardt tells me. “It makes you feel that you can trust that person. It’s like a cleaner or a babysitter.”

It’s true that, once an owner finds a sitter they like, there’s nothing to stop them continuing the relationship off the platform, depriving Cat In A Flat of the revenue. But while that might seem tempting, bookings made via the site come with insurance for both veterinary reimbursement and accidental home damage, giving owners that extra peace of mind.

So has anything ever gone wrong?

“People are very trustworthy,” says Barnes. “We haven’t had any problems, and that’s actually what makes us love our community so much. We’re really proud of everyone.

“It’s really friendly. It’s about helping people meet each other who have something in common, which is obviously their love for cats. They understand how important your fur-baby is to you.” 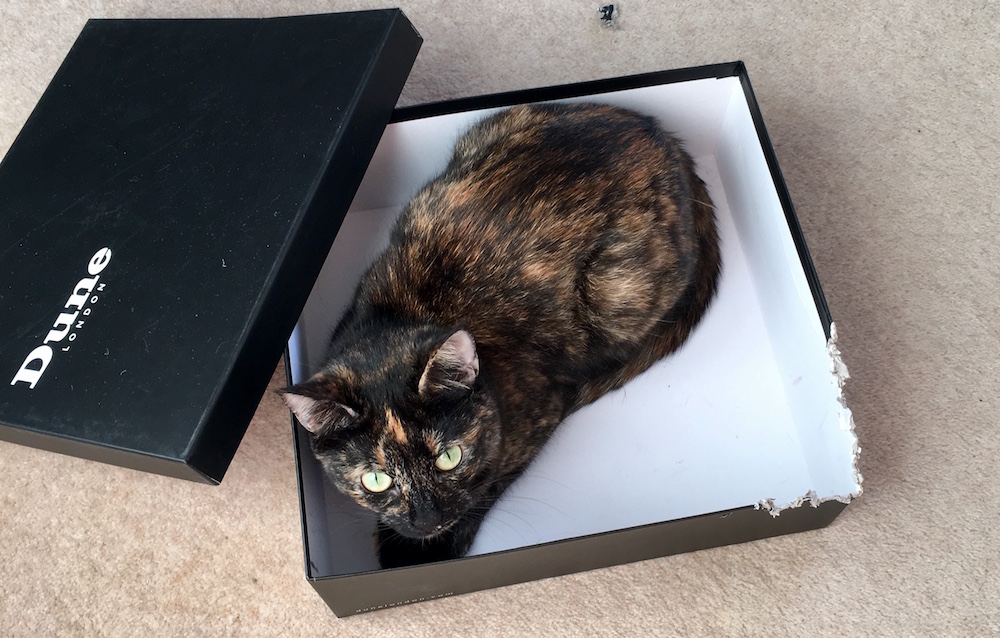 You might not believe me if you’re a dog person, but having a cat has been proven to alleviate anxiety, lower blood pressure, and reduce the risk of a heart attack or stroke by up to a third, according to a 2008 study from the US. But in big cities where space is scarce and renting often comes with restrictions, pet ownership isn’t always an option.

Britain has recently imported a trend from Japan for “cat cafes” (the first in London opened in Bethnal Green in 2014), where visitors can enjoy some quality feline time even if they can’t have a pet themselves.

Cat In A Flat offers another option for people who “want more kitties in their life”, as Barnes puts it. It also makes ownership easier for those with busy high-paced jobs or who often travel and want to make sure that their pets are well taken care of.

But it’s not just for city high-flyers.

“It’s primarily an urban service,” says Burckhardt. “But we find that it actually enables a lot of rural people to offer their services too. They’re willing to travel, they get a bigger reach, and they get paid.”

And sometimes that will involve going to stay in a remote farm house for a while – a change of scenery, a quiet place to work, and of course a cat. If I ever get around to writing a book, it sounds tempting.

I ask about the kind of people who sign up. Do they fit the stereotype? In short, no, says Barnes.

“What’s nice about our community is that we’re all age groups, genders, cultures. It connects people from all walks of life. We have cat-sitters who are retired but love to do it. And then obviously students. They like to sign up and earn a bit of money, but also go and study with a cat on their lap.”

I am reminded of universities in the US offering days when stressed-out students can play with puppies or kittens, and think about how much I would have valued some calming cat playtime in the run-up to my exams.

Burckhardt agrees, but she adds that there is also a trend of people from the creative world getting involved. And she thinks she knows why.

“I love cats because they have their own will, their own way of thinking. And I think that freedom of thinking might actually inspire the creative world. We find that we have a high percentage of cat-sitters that come from a creative background: designers, artists, musicians, actors, writers.

“I think that maybe there’s a correlation between knowing your own will and feeling free to be creative.”

Both founders are keen to stress to me that this isn’t just a business. “We’re a cat-sitting community,” says Barnes firmly, emphasising that the network brings people together in their local neighbourhood who might not otherwise have met.

“We have a Facebook group as well,” Burckhardt adds. “It’s a very close forum. Only approved cat-sitters can join. That supports the mission of being a community rather than just your own little silo-service. They might come with a problem, but they help each other out. And obviously there is a lot of sharing cat photos.

Finally, what do these entrepreneurs have to say to the accusation that they might be, well, crazy cat ladies?

“Yes,” says Barnes proudly. “But modern crazy cat ladies. Not the stereotype of the old woman with about 10 cats, more just crazy in terms that we understand that each cat is so different and their personalities are so intriguing.

“And I like the fact that they’re always the boss.”