Coming at a time when market participants are concerned over the potential implications of impending rising interest rates off the back of soaring inflation, traders will be watching closely for any signs of an economic slowdown.

Unfortunately, there is a strong chance that many view this release with a pessimistic slant, for any positive jobs data could simply be passed off as short-term strength before the true effects start to take hold.

With fears over the economic trajectory over the second half of the year, traders will be keeping a close eye out for whether we are starting to see businesses or workers react to the pressures that have been steadily building of late.

Taking a look at some of the secondary surveys can give us an insight into exactly what we might see when the headline figures emerge on Friday.

What can we learn from employment surveys?

It is often useful to look out for clues within alternate employment readings, with the Conference Board Survey, ADP, jobless claims, and ISM manufacturing PMI all worth analysing ahead of the main event.

Conference Board Survey – Firstly, we can look at the latest ‘Conference Board’ survey for June, with the ratio between those finding it difficult versus easy to obtain work providing a good proxy for unemployment. As we can see, the conference board ratio has started to turn upwards over recent months. That represents a notable shift after the declines of 2021. While unemployment has yet to pick up, this relationship indicates a potential impending upward reversal for unemployment. 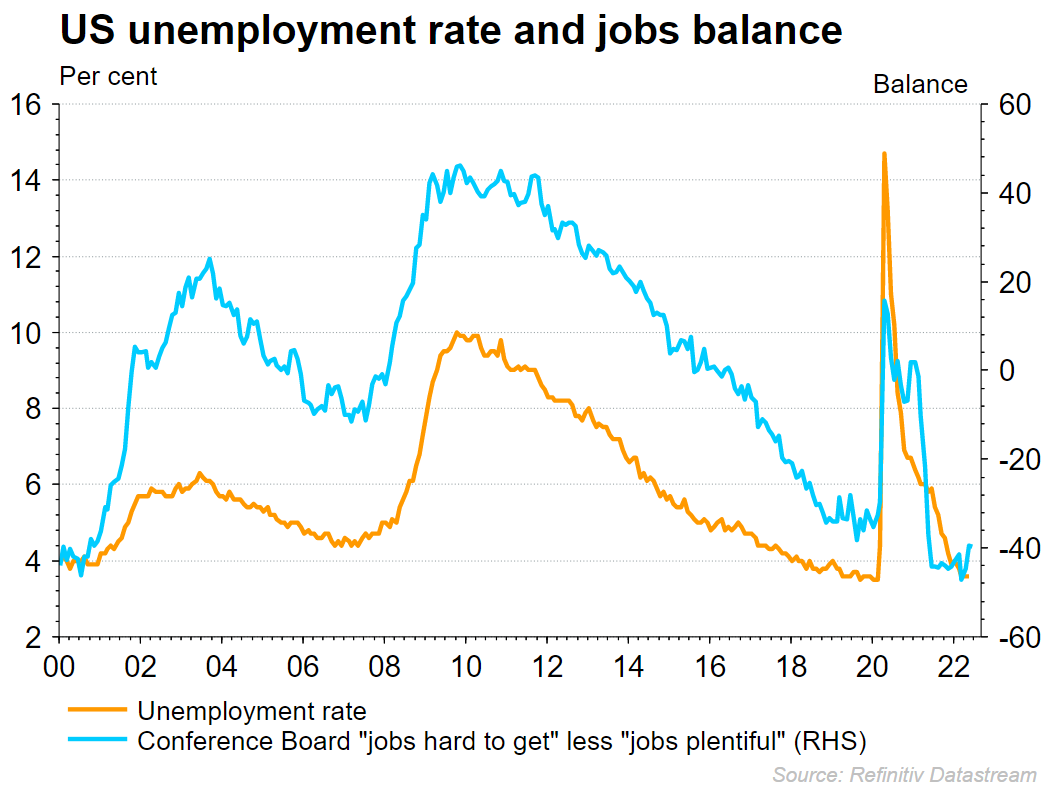 ADP payrolls – ADP are taking a break from publishing their employment report, with the firm opting to pause both July and August releases while they reconfigure their methodology.

Initial jobless claims – Initial claims have been on the rise over the course of the past three months, turning the tide on the declines seen throughout 2021. The recent declines seen in the payrolls figure do note that this is feeding through, with rising average initial claims serving to highlight how pressure is gradually building on the US jobs market. 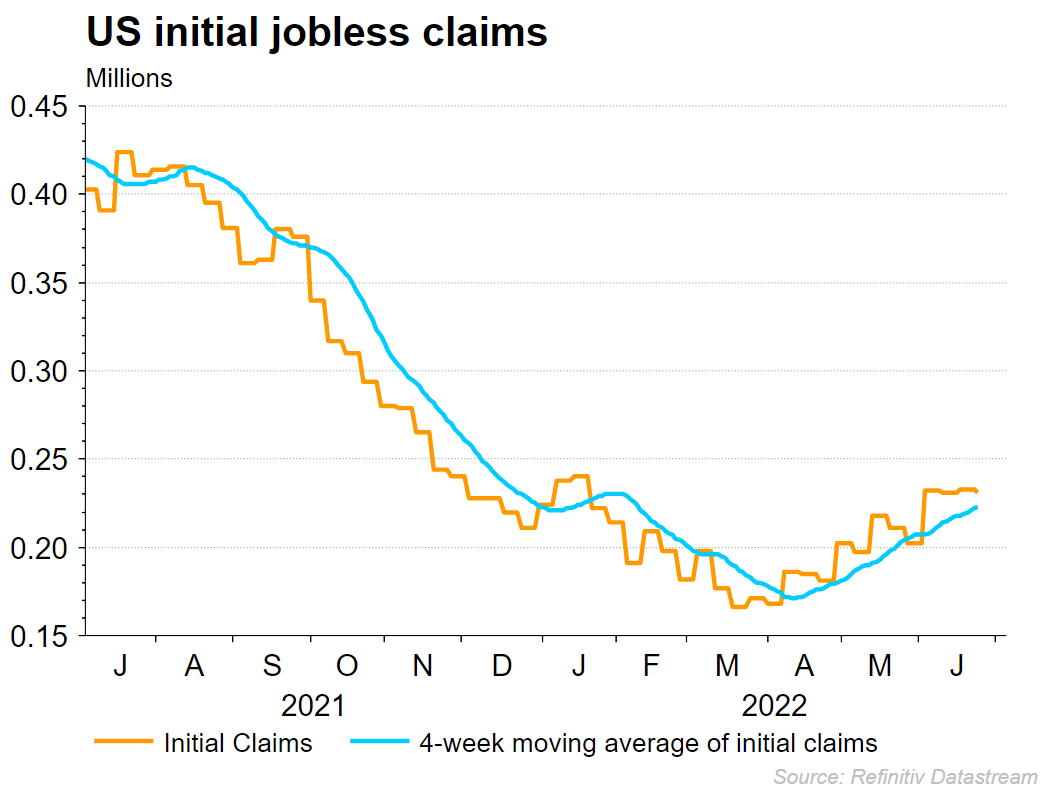 ISM manufacturing PMI – The June ISM manufacturing PMI saw a sharp decline for the employment element, falling further into contraction territory (47.3). That represents the lowest reading in almost two years. It is evident that the manufacturing sector hiring has come under pressure, signalling the potential for a weak payrolls number. Notably, the NFP forecast does point towards a similar move lower. 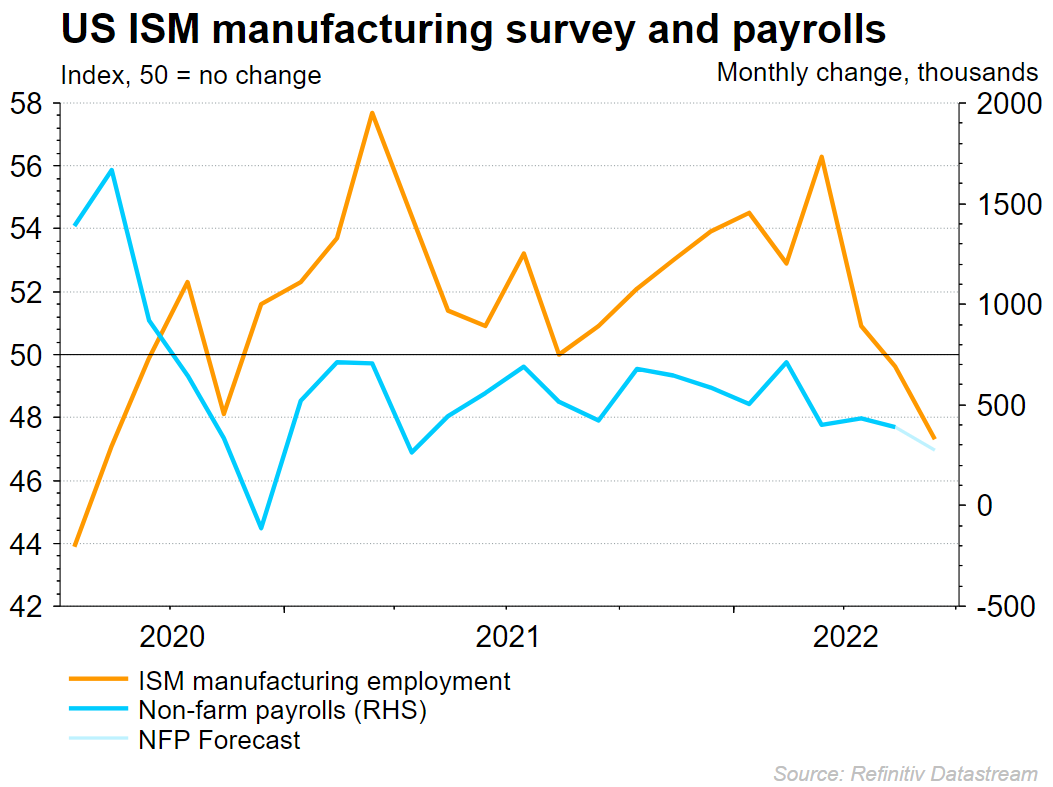 ISM non-manufacturing PMI – Unfortunately, we are seeing that same story play out for non-manufacturing hiring, with the recent figure of 47.4 representing the worst number since July 2020. Again, the relationship with the payrolls figure does point towards declines for the headline NFP figure on Friday as forecast. 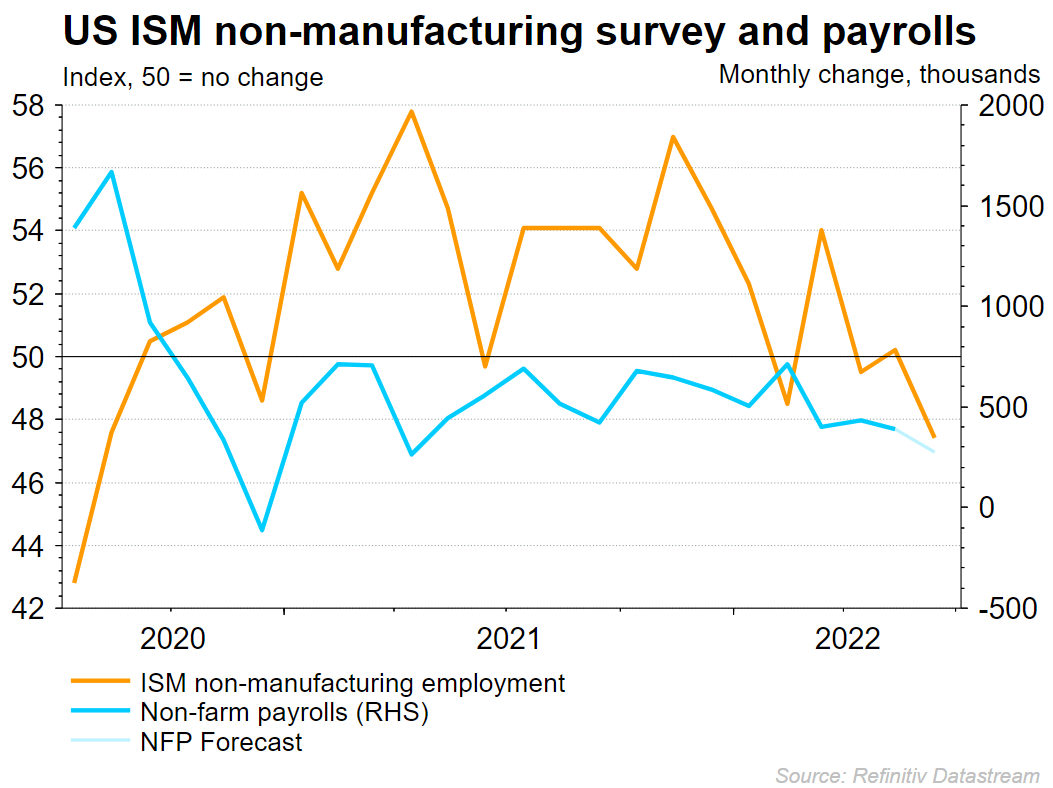 The headline non-farm payrolls figure has been on the slide of late, with the latest figure of 390,000 bringing a 13-month low.

However, it is interesting to see where much of that weakness has come from, with employment in trade, transportation, and utilities largely dropping out post February. 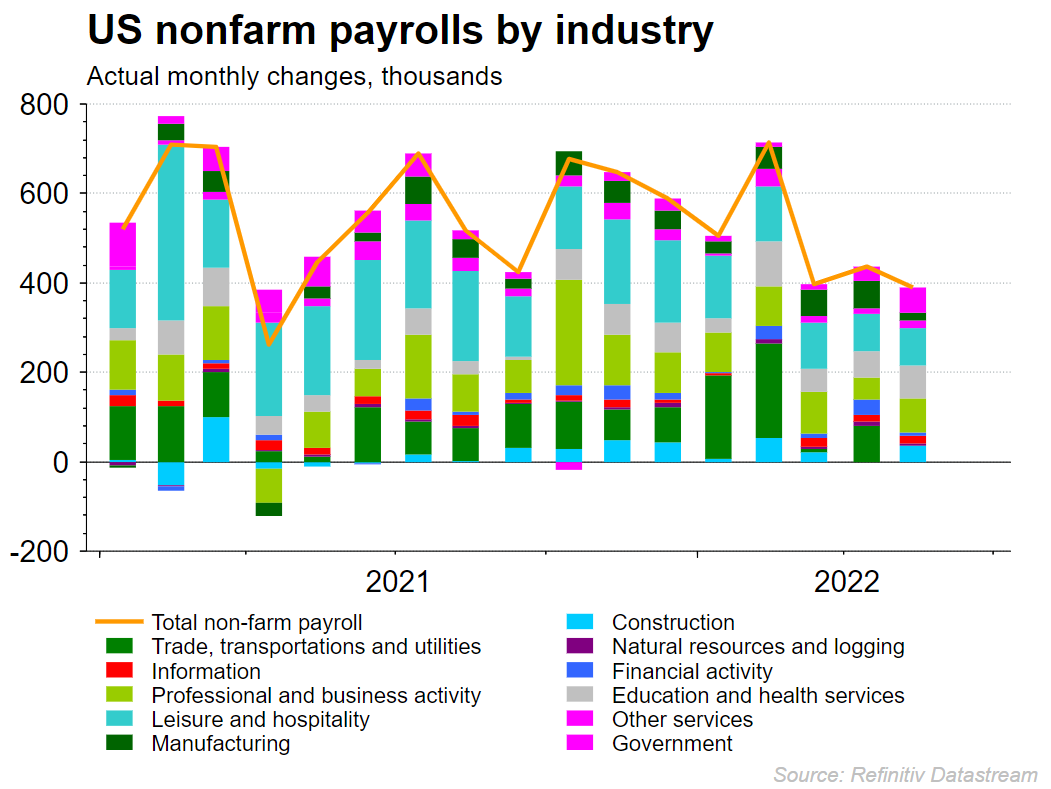 From an unemployment perspective, we have seen things flatline of late after years of declines. However, the conference board ratio does point towards a rise further down the line. The timing of this is difficult to ascertain, but it is certainly a data point worth watching as markets could start to head towards risk-off assets once we do see it turn.

US wages have been relatively elevated of late, but there is a chance that rising inflation pushes companies to ramp up wages to retain talent.

The risk for the wider economy is that companies raise wages, and pass that cost on to the consumer. Such a circular pattern could bring an inflation spiral that forces interest rates higher to the detriment of growth and equity valuations.

Markets are currently expecting the average hourly earnings figure to remain at 5.2% year-on-year (YoY), but traders should remain cognisant of the risks posed by any further lift-off in wages. 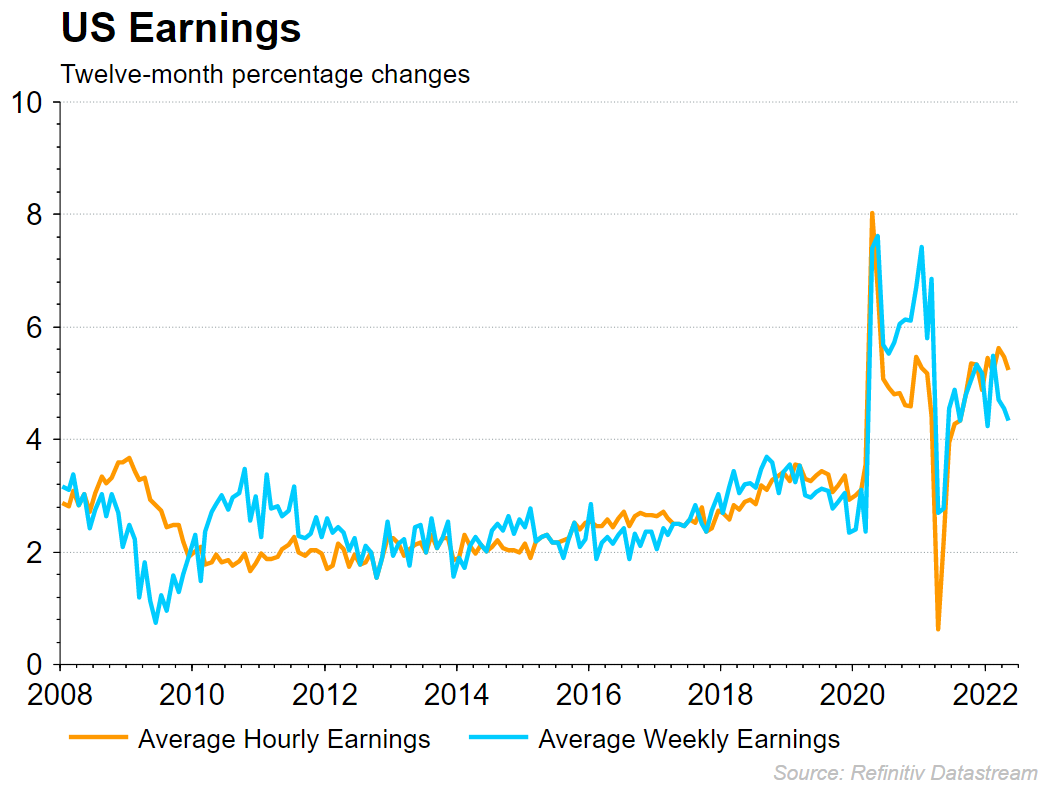 The dollar index has hit a 19-year high this week, with price building off the back of a notable break through the key $103.80 resistance level established back in 2017 and 2020.

We are seeing the dollar come off somewhat today, yet it is worthwhile noting that any phase of downside looks likely to represent a retracement of the latest rally from 103.19. Only a break below that level would bring about a more pessimistic outlook for the greenback. 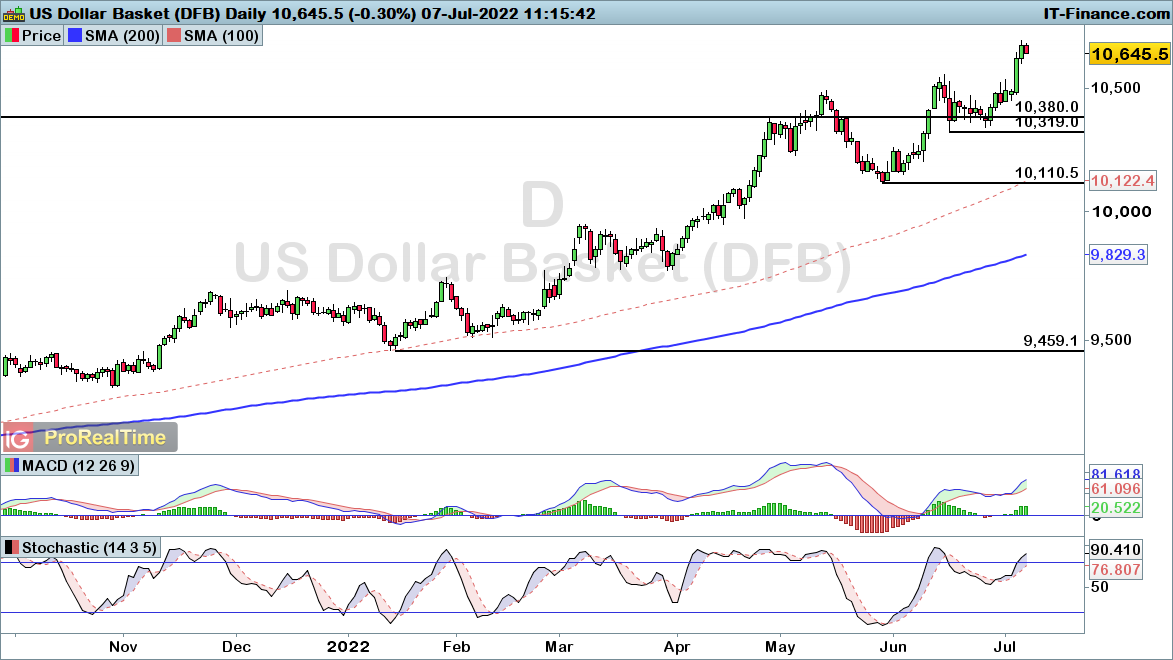 The Dow Jones Industrial Average (DJIA) managed to hold up on 29568 support (February 2020 peak), with the index attempting to gain ground over the three weeks since.

However, we remain within a bearish trend until price breaks up through the 33460 threshold. As such, while we could see some near-term upside, the risk of another downside turn remains for now. 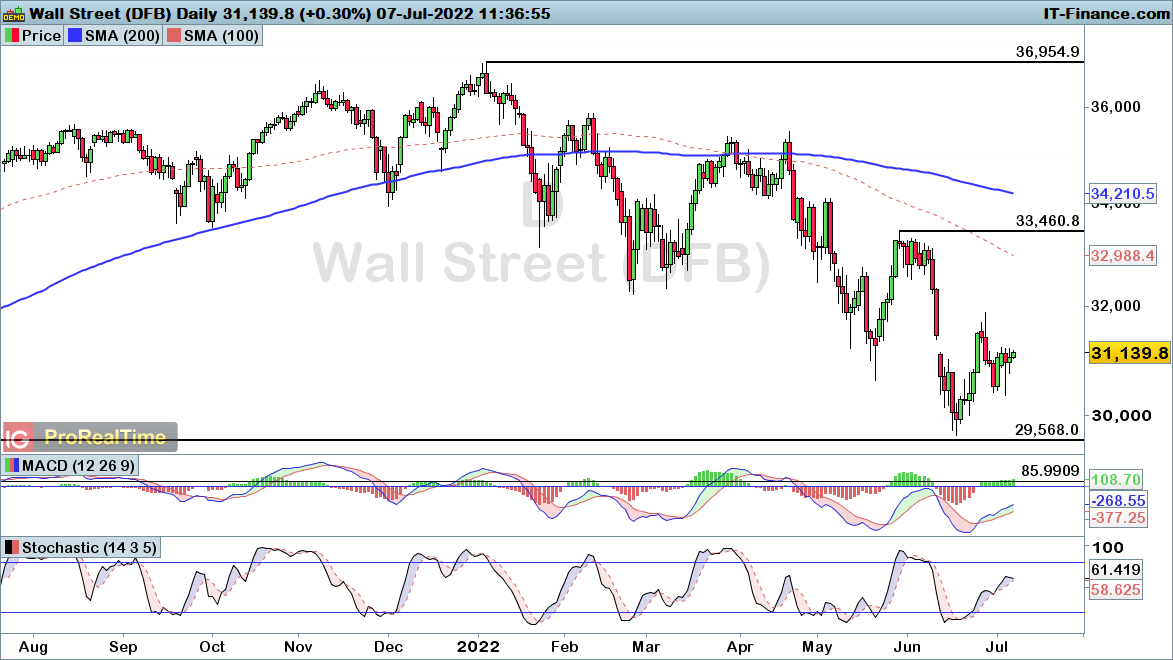