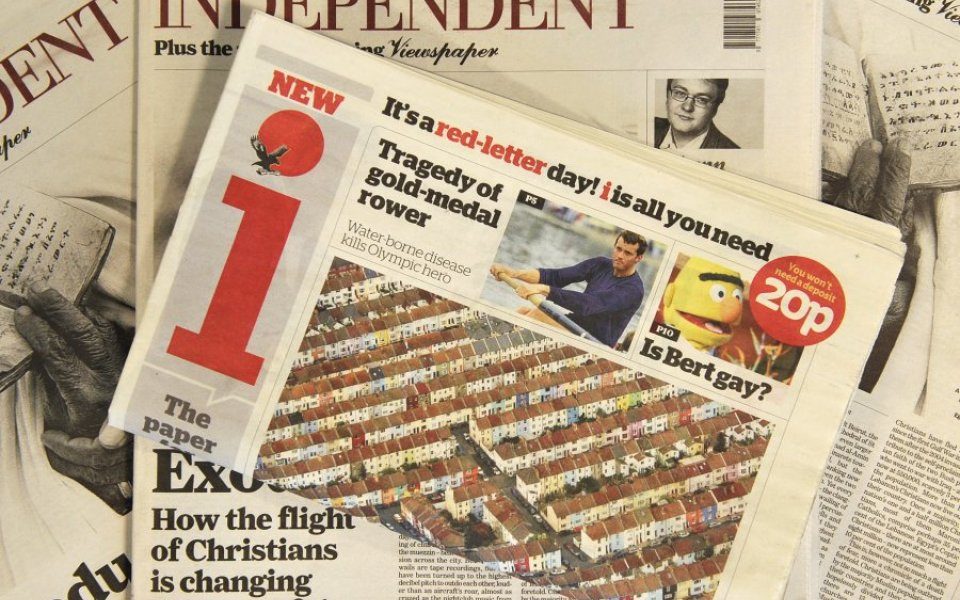 The Independent and Sunday on Independent will print their last editions next month, after tabloid sister paper the I was sold off to Johnston Press for £24m.

An email to staff from ESI Media owner Evgeny Lebedev confirmed the closure of both the Independent and Independent on Sunday. The last print edition of the main paper will be 26 March and the Sindy will close after the 20 March issue.

It is thought up to 100 jobs will be made redundant, although no figure has been confirmed.

Lebdev said a "significant" number would transfer over to Johnston Press, but confirmed that "all those on employment contracts and long-term casuals who are being made redundant will receive two weeks' pay, subject to condition, for every year worked, plus your notice period."

He insisted the move was right to position the business for the future.

"We faced a choice: manage the continued decline of print or convert the digital foundation we've built into a sustainable and profitable future," he wrote. "In choosing the latter, we will create 25 new content roles, launch new subscription mobile app, enhance the redesigned, thriving independent.co.uk, open new editorial bureaux in Europe, Middle East and Asia and invest further in our New York-based US operation."

The Evening Standard is unaffected.

Johnston's action of the i, for £22m in cash on completion and £2m in cash in April next year, will create the UK's fourth biggest news publishing group, selling the equivalent of over 600,000 copies a day predominantly outside London.

The acquisition is expected to be immediately earnings enhancing, Johnston said. I had unaudited "carve out" operating profits of £5.2m for the year to 27 September 2015. It also expects to make "cost savings and revenue synergies" through the deal.

The £24m will come from Johnston's existing cash resources.

"The directors believe that the combination is a strong strategic fit," Johnston said. "The i will help build the group's national print and digital display advertising revenues through access to a number of strategically important local markets and the large and attractive ABC1 demographic category which comprises 77 per cent of i's readership, as well as a number of blue chip advertisers, the majority of whom do not currently advertise with Johnston Press' titles."

It joins titles such as such as The Scotsman, The Yorkshire Post and the Belfast based title Newsletter, which are being badged as "premium brands".

Ashley Highfield, chief executive of Johnston Press said: "This is a transformational acquisition for Johnston Press and an important step towards delivering our long-term strategy. i is a highly regarded newspaper with a clear market position and a loyal readership. By joining with Johnston Press the combined circulation will be equal to 9% of national daily circulation, making us the fourth largest player in the market. This enhanced reach represents a significant growth opportunity for Johnston Press in terms of national print and digital advertising revenue. It also rebalances our revenues towards less volatile circulation revenues.

"With our considerable digital experience the combination of Johnston Press and i will also allow us to grow digital audiences and revenues through the creation of inews.co.uk."

Steve Auckland, chief executive of ESI Media, added: "We are incredibly proud of the success of i since its launch in 2010. In just five years, i has changed the face of national newspapers,demonstrating that you can innovate in print.

"I would like to thank everyone who has contributed to the success of i for their dedication, ingenuity and creativity. A magnificent team effort."