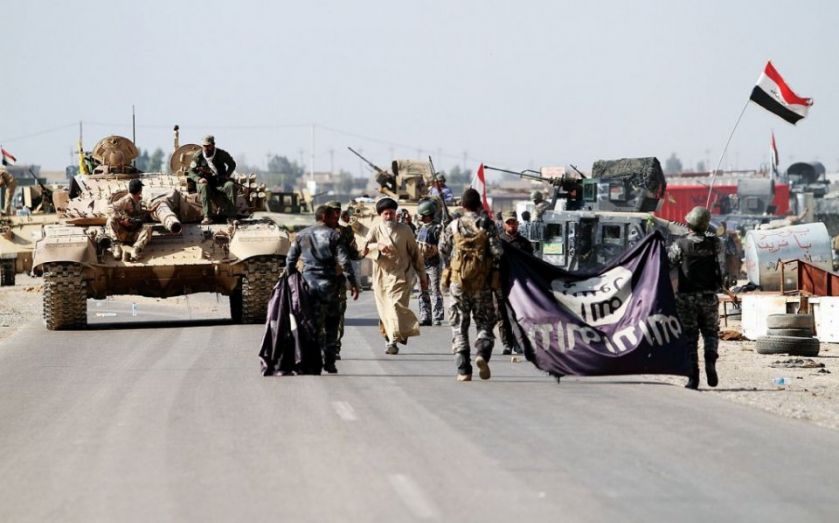 Baghdad plans to raise $6bn as ongoing battles with militants have decimated infrastructure.
Iraq is heading to the bond markets with hopes of raising billions, as low oil prices and the fight against Isis eat into state finances.
Deputy governor of Iraq’s central bank, Zuhair Ali Akbar, confirmed the country will issue $6bn (£3.9bn) in dollar-denominated debt, in its first bond issue for nearly a decade. Citi, Deutsche Bank and JP Morgan are understood to be working on the offering.

Fighting Isis has drained Iraq’s resources, and the government is hoping the bond sale will help to plug a hole in its fiscal deficit. It has been a particularly tough time for Iraq since its main revenue stream, oil, has halved in price over the past 12 months.
It has the fifth-largest oil reserves in the world and there were hopes it could ramp up production to boost state coffers, but sectarian violence has caused extensive damage to infrastructure and private sector assets. In June, Iraq was forced to take a $833m loan from the International Monetary Fund (IMF).

Perhaps unsurprisingly, Iraqi bonds will likely be rated junk, as credit ranking firm Fitch recently gave the country a rating of B-. Investors in these bonds will be subject to political risk worse than anywhere else in the world.
“Political risk and insecurity are among the highest faced by any sovereign,” Fitch said in its credit report.
“Isis militants currently effectively hold three of the 18 provinces, relations with the Kurdish regional government are volatile and governance indicators are exceptionally weak.”

The glaring question is how successful the debt sale will be. Iraq’s 2028 bonds are currently trading at a yield of 8.54 per cent, after their price dropped from 92 cents per dollar to 79 cents.
There is an insatiable demand for yield and in recent years investors have clamoured for esoteric fixed income assets that would have historically been no-go areas. But loaning money to Iraq may be a step too far for some professional investors. “It’s just off the scale,” says Haig Bathgate of Turcan Connell.
Clients may also shy away from the notion. “The thought terrifies me,” says Gary Reynolds of Courtiers Investment Services. “If you put Iraqi bonds into a fund, what would you tell a client?

The news comes shortly after the Kurdistan Regional Government – a semi-autonomous area in northern Iraq – shelved plans to raise up to $1bn from debt markets.
It, too, has struggled with Isis and has experienced an influx of refugees displaced by fighting. An agreement between Baghdad and Kurdistan’s capital, Erbil, was reached earlier this year allowing the territory to issue its own debt. A maiden bond offer was tentatively arranged and officials from the capital had conducted meetings with investors in London to sound out demand. But Kurdistan has been involved in an ongoing dispute with Iraq over the sharing of oil revenues and was ultimately forced to pull out of the planned debt offer.

In perhaps the starkest sign of how far low oil prices are pressuring the oil-rich Middle East, last week Saudi Arabia also announced its own debt raising.
The Saudis hope to sell a massive $27bn to shore up their budget deficit. This is far larger than its last issue, of $4bn in July 2007, and appears to show cheap oil really is beginning to hurt. Despite being one of the wealthiest countries in the world, Saudi Arabia has a widening budget deficit following spending on infrastructure projects.
Although the Saudis have made a concerted effort at keeping the oil price low, through encouraging Opec to keep production levels highs, the IMF estimates it needs crude prices of around $105 a barrel in order to maintain its finances.
“Its budget deficit has risen this year, not only on the oil price decline, but also due to one-off fiscal outlays following King Salman’s accession to the throne in January. This included a two-month bonus payment that was mirrored by many state-owned entities and the private sector,” says Kaan Nazli of Neuberger Berman.
The Saudi Arabian debt issue will come in tranches of $5.3bn each month until the end of the year with notes dated five, seven and 10 years.
Share:
Tags: NULL