Inside Amazon's Black Friday operations hub: How the e-commerce giant prepares for its busiest day of the year 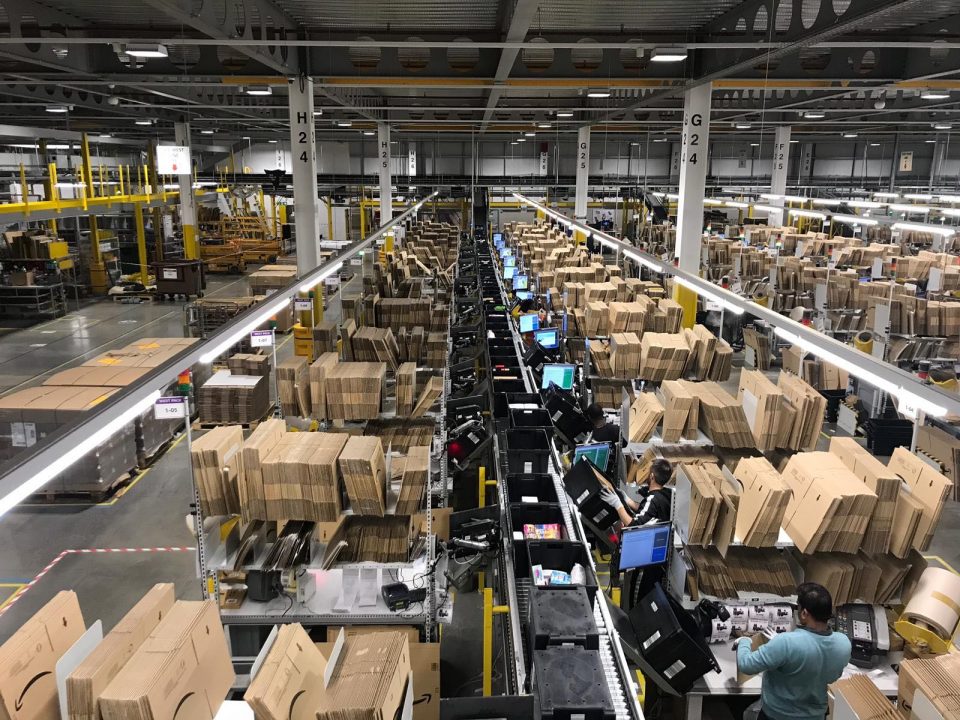 Where could be a better place to witness the behind-the-scenes impact of Black Friday than at the heart of Amazon’s UK warehouse operations?

Some of the credit – or perhaps, blame – for the annual shopping event’s popularity in Britain surely lies with the US e-commerce giant.

The fulfilment centre – which is the size of 28 football pitches – looms into view on the approach from Tilbury Town train station in Essex.

Read more: Black Friday deals found to be cheaper at other times of year

LCY2, named after the nearby London City Airport, is the largest Amazon fulfilment centre in Europe and employs around 2,500 permanent members of staff – bolstered by 1,500 seasonal employees during the peak trading period.

For Amazon that period is now as it ramps up its operations for Black Friday and Cyber Monday to continue all the way through to Christmas.

It becomes clear early on that my tour guide is on a charm offensive to battle allegations of poor working conditions at the warehouse, particularly ahead of planned GMB union protests outside several Amazon warehouses on Black Friday and Cyber Monday.

Toilets are pointed out with enthusiasm. “Look,” I’m told, “there is no need for employees to be forced to urinate in plastic bottles [as was previously reported by an undercover journalist] – there are toilets everywhere!”

Read more: Black Friday 2019: How to find the best bargains

Apparently the most common complaints among employees are the quality of the free coffee and the choice of background music – though it can barely be heard over the hum of parcels being passed between various robots, not gruelling targets or timed toilet breaks.

“We don’t have anything to hide,” Tilbury operations manager Sertac Yilmaz tells me.

The company has insisted it offers a positive workplace environment and a competitive hourly wage of £10.50, and when I visit following an invitation from Amazon earlier this week there is no visible evidence of Victorian workhouse-style labour.

But the work, which involves four 10-hour shifts per week with two half an hour breaks each day – does look tough, monotonous and lonely.

This 24/7 operation is what it takes to carry the e-commerce giant, which has been offering Black Friday deals since last week, through the discounting weekend and the festive period.

However, while online sales for Amazon and its competitors appear to be surging, some retailers are showing signs of fatigue with the annual promotional event nine years after its debut in the UK as discounts eat into profits ahead of Christmas.

“No one wants to give away margin before the all-important Christmas trading period, but the genie is out of the bottle and so the successful retailers will be those that can out manoeuvre their competitors without eroding too much of their profitability,” says Richard Lim, chief executive at Retail Economics.

Paul Martin, UK head of retail at KPMG, adds: “Some retailers have avoided the adoption of the American-born sales event altogether, no doubt having come to the conclusion that the juice just isn’t worth the squeeze, especially in light of wafer-thin profit margins at the moment.”

Footfall across bricks and mortar retail destinations is expected to be down 4.5 per cent this weekend, perhaps meaning that the once prevalent overnight queues and scraps over the last flat screen TV are a thing of the past.

Research by KPMG and Opinium found 50 per cent of shoppers plan to hunt for bargains online, with just seven per cent saying they will focus on in-store purchases only.

Linda Ralph, vice president of international business development at Mood Media, said: “In previous years, many British retailers were guilty of overlooking the importance of the in-store experience on Black Friday, focusing instead on discounts as the primary way to drive sales.

“This has generated a powerful negative association for British consumers who see Black Friday as an unpleasant in-store shopping experience.”

Online shopping might offer convenience and the best savings for consumers, but it is not without its own risks.

As more shoppers migrate to the web to snap up Black Friday deals, cyber security experts have issued warnings about the potential threat of hackers seeking to exploit the rush.

Cyber defence firm Darktrace warns that the number of Trojan-based attacks more than doubled in November and December last year compared to the number recorded in September and October.

There was also a 70 per cent rise in doppelganger attacks – which is when hackers create a fake version of a legitimate website to trick shoppers.

Tom Gaffney, cybersecurity consultant at F-Secure said: “When using a mobile phone, people are more likely to be in a… mode of thinking where their guard is down and they make fast, unconscious, automatic decisions.

“People are much more error prone in this state of mind and much more susceptible to cybercrime like phishing attacks.”

Despite the online risks and reports of discount-fatigue, most forecasts suggest Brits are expected to spend more than last year as the weekend falls after payday. Research from Nationwide estimates that its members are set to spend £180m this year, up six per cent on 2018.

Back at Amazon’s Tilbury warehouse I’m told staff don’t measure their tenure at the company in years but in “peaks” of high trading periods. Operations boss Yilmaz, who is on his fourth “peak”, says the team is prepared for the onslaught.

“I think we are ready for it, it is not the first time for us,” he says.

And, judging by the hype that still remains around the event, it likely won’t be the last.