For example, Jason Voss, CFA, wrote in a post on Enterprising Investor that equity listings in Europe declined by 22% between the peak in 2007 and 2012 and are around 10% lower than the level in 1997. The initial public offering (IPO), which has underpinned equity capital raising for decades, has been somewhat replaced by private capital transactions that are typically only known by and open to large institutional investors. Whether the demise of the IPO and the role of the public markets in capital formation are the result of excessive regulation, litigation, or the market’s focus on short-term results, the situation is clearly of concern and warrants further attention.

In this context, we read with interest the European Securities and Markets Authority’s (ESMA’s) EEA Prospectus Activity in 2016 report, which presents data, statistics, and analysis of prospectus activity for public security offerings (equity and debt) in the European Economic Area (EEA) within the EU prospectus regime. The findings in the report, reinforce the need to reform and reinvigorate European primary capital markets through such initiatives as the Capital Markets Union (CMU) and the Prospectus Regulation (PR).

The headline finding of the report is an 8.5% decline in prospectus approvals between 2015 and 2016, which is consistent with the secular trend since 2009 of a decline of prospectus approvals of around two-thirds since the peak in 2007. The report indicates that the majority of this decrease occurred by 2010 in the immediate aftermath of the financial crisis. But rather than recover, the number of IPOs has continued to decline.

Other interesting statistics in ESMA’s report are that only 25% of approved prospectuses were for equity securities. The most common security type is a debt security with a denomination of greater than €100,000. All approvals were highly concentrated in a small number of jurisdictions, particularly Luxembourg (18.7%), Ireland (17.7%), the United Kingdom (11%), Germany (10%), and France (10%). These national breakdowns mask the significant divergence in approval patterns by security type. For example, 20.9% of equity prospectuses were approved in France, followed by the United Kingdom (18.7%) and Sweden (15.8%). Debt security prospectus approval occurred mainly in Luxembourg (24.8% of all debt prospectus approvals), Ireland (23.3%), and Germany (10.7%).

The majority of approved prospectuses that applied for and received passporting rights (which allows the security to be sold across borders) were given those passporting rights by either Germany or Luxembourg (more than 250 passports each, or 64% of all passports given). The ESMA report shows that passporting activity has been on a shallow decline since 2013, as shown in the following figure, suggesting that cross-border impediments to capital raising remain quite high. The 2016 total was 73% of the 2011 peak level of passporting. These figures help to explain the motivation behind the CMU initiative. 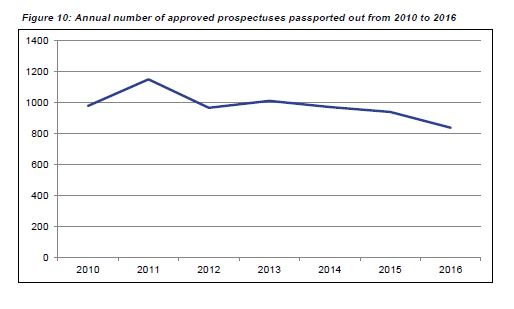 Although the absolute number of passported issuances has been slowly declining, the proportion of approved prospectuses that were passported from a home country has been relatively stable at 25% since 2011. This statistic suggests that the overall decline in prospectus activity is driving the decline in cross-border passporting requests, rather than cross-border impediments themselves getting worse.

These subdued findings emphasize the importance of the EU’s ongoing efforts to improve and simplify the issuance regime through the updated Prospectus Regulation, part of the CMU initiative. There is clearly scope to improve both the absolute number of securities issuances (particularly equity securities) as well as the cross-border distribution of those securities.

The role of the CMU

The Prospectus Regulation is one of the first elements of the CMU initiative to reach the legislative stage. It aims to improve the ability of European capital markets to support the wider European economy by making it easier for companies to access public capital through improved and harmonized rules and regulations relating to prospectuses.

CFA Institute recently published a report on Designing a European Summary Prospectus using Behavioural Insights, which proposed a template for the summary prospectus envisioned under the Prospectus Regulation. The template is designed to be a seven-page summary of the prospectus (applicable to both the full prospectus as well as the slimmed-down Growth Prospectus), which addresses criticism that existing prospectus summaries have become overly long and filled with boilerplate text. In designing our template for the summary prospectus, we wanted to address the issue of information overload, which is a common complaint against listing documents, by incorporating insights from the fields of behavioural economics and behavioural finance. CFA Institute will continue to engage on this issue through the Level 2 consultation process in the coming months to ensure that prospectus disclosures meet the information needs of investors.

Although regulatory attempts to improve the attractiveness of IPOs, such as the Prospectus Regulation, are to be welcomed, it is not clear that the regulations are the problem. There are various theories behind the drop in IPOs:

Some of these reasons do not appear to be amenable to regulatory intervention, which is problematic because the negative effects on public market integrity are nevertheless significant. The rise of initial coin offerings (ICOs) may be another symptom of public markets being unattractive for some deep-seated, fundamental reason, in which case, a more substantive reconsideration of the role of public markets may be necessary.

If you found this post useful, you can find more on Market Integrity Insights, a CFA Institute blog.