Apple Pay, the tech giant's mobile payment service, has launched in the US offering users the ability to pay for items using just their mobile phone.

It kicks of the most high-profile launch in the nascent mobile payment space, which could finally push it into the mainstream.

A mobile wallet is perhaps the best way to describe it, and in practical terms it means iPhone or Apple Watch users can pay for things with a swipe, much like tapping in and out with an Oyster Card. Who wouldn’t want to do that?

The technology that largely makes this possible is called NFC, or Near Field Communication, and perhaps surprisingly it’s been around since the early noughties, with many not-quite-successful attempts by various device makers, mobile networks, retailers, merchants and even Google, to make mobile payments take off.

The hype surrounding the technology has taken a long time to build, but it could finally be about to have its moment with Apple on board.

Gartner’s hype cycle assesses the prospects of emerging technologies, and NFC has been sitting in the so-called “trough of disillusionment” for the last three years, with the expectation of becoming mainstream within two to five years. 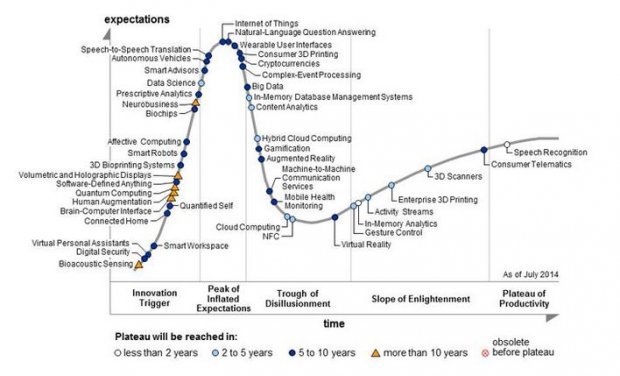 In 2011 NFC was at the “peak of inflated expectations” and predicted to take five to ten years to become adopted in the mainstream.

Before that, NFC failed to make Gartner’s hype cycle at all.

Why will Apple suddenly move NFC and mobile payment from the trough of disillusionment to the “slope of enlightenment” and “plateau of productivity” where others have failed?

Crucially, it has retailers on board. McDonald’s, Subway, Macy’s, Bloomingdale’s, Walgreens, Duane Reade, Target, Staples and Whole Foods Market are likely to take on a lot of the promotional grunt work in encouraging people to pay with their iPhone, because they will be keen to associate themselves with a brand with such cultural cachet.

It’s the equivalent of having Pret, Boots, John Lewis and Primark on board in the UK, and who wouldn’t want to use the phone already in their hand to pay for their lunch or £10 pair of jeans?

In addition to having this strong list of retailers on board, analysts IHS point to three further advantages Apple has over predecessors when it comes to NFC and mobile payment: it already holds users' credit card details through Apple ID; tight software and hardware integration between Apple Pay, Touch ID, and its existing Passbook app; a primary focus on hardware sales means Apple does not need to focus on generating additional revenue, user information or advertising services from Apple Pay meaning it can focus on user experience.

The backing of Visa, Amex and Mastercard, Bank of America, Citibank and Wells Fargo takes the difficult financial regulatory and legal legwork out of the hands of Apple- which knows its stuff about tech is hardly a guru in the financial payment infrastructure business in the same way as banks and merchants.

While the likes of Google, Samsung and Microsoft have made attempts to make mobile payments work, nowhere have they had such widespread support as Apple.

With Visa, Amex and Mastercard on board, that represents 83 per cent of the leading US credit cards on board, says CCS Insight analyst Geoff Blaber.

In addition to these companies, Blaber says the support of “a host of leading retailers and compatibility with existing contactless payment infrastructure confirms our long-standing prediction that it will be Apple that finally makes the promise of mobile payments a reality.The launch of Apple Pay using NFC is of huge significance."

Mobile payment is a complicated technology, but Apple look to have made the greatest effort yet to iron these out with Apple Pay and make it a seamless- and secure as possible- experience for consumers.

In addition to having this strong list of retailers on board, analysts IHS point to three further advantages Apple has over predecessors when it comes to NFC and mobile payment: It already holds users credit card details through Apple ID; tight software and hardware integration between Apple Pay, Touch ID, and its existing Passbook app; a primary focus on hardware sales means Apple does not need to focus on generating additional revenue, user information or advertising services from Apple Pay meaning it can focus on user experience.

At the moment, just a third of Brits would use their smartphone to make a payment under £20 and just 15 per cent would use it for any larger payment, according to research from Marketing Sciences.

“Even in the UK where contactless transactions through debit and Oyster cards are becoming more common people are not yet convinced of the benefits of mobile payments. Apple will have to convince consumers that its Apple Pay system is reliable, convenient and, most importantly, secure – but take up will likely be accelerated by use of the retail partner loyalty schemes which do provide a clear benefit and reason to go mobile," said research director Richard Snoxell.

The good news for Apple competitors who’ve so far failed to make NFC and mobile payment work, is they may already be ready for this technology to take off.

Existing mobile payment companies which have so far failed to gain traction with consumers have already saw the first hint of a boost after Apple Pay was announced last month.

Shares in Net Element were up 155 per cent to $440, while On Track Innovations surged 32 per cent, both firms’ biggest one-day advance ever. USA Technologies also rose nearly 10 per cent.

While Apple Pay is currently US only, Apple says it is working hard on extending it to further markets. IHS predicts further roll out won’t be far off, saying: “Apple will extend  Apple Pay internationally as soon as it is able to do so. Apple's product strategy is global-focused and, as a result, keeps variation in products, models and services to a minimum to maximize global scale economies. Apple has already started conversations with key financial players. Even when it launches in one country first, Apple ensures its product design is suited to selling worldwide as soon as Apple has overcome launch hurdles.”

The consensus seems to be, if anyone can finally make mobile payment happen, it's Apple.