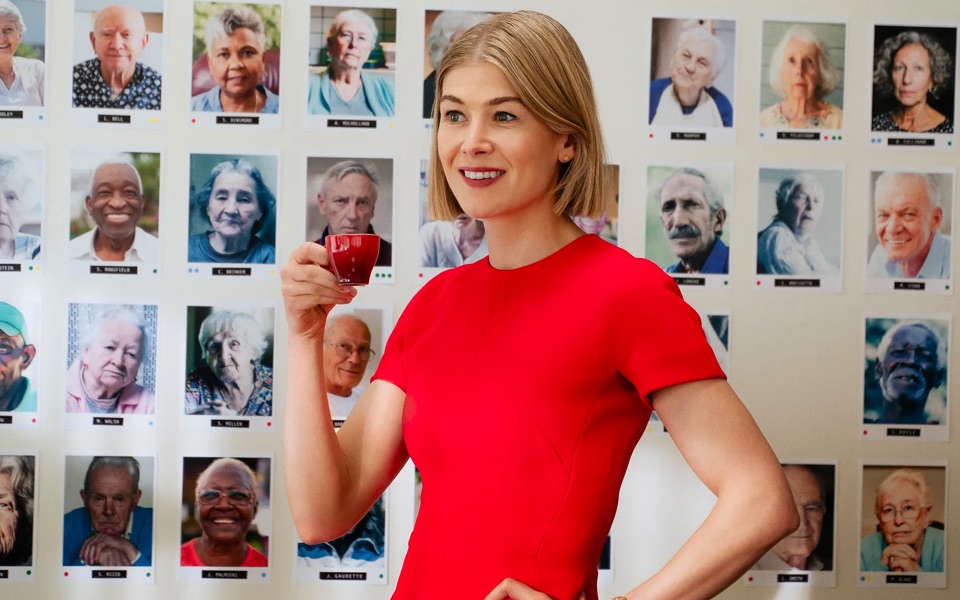 In these tough times, many of us have turned to movies that lift us up, and remind us that there is some good in the world. Despite its title, I Care A Lot is not one of those films.

Read more: Framing Britney Spears: A glimpse of the hell of celebrity

Rosamund Pike plays Marla Grayson, who makes a living from becoming the legal guardian of elderly wards of the state who can no longer look after themselves. In reality, her business is a high stakes scam where wealthy older people are pushed into care based on falsified diagnoses, at which point she begins to embezzle their assets while providing sub-par care. She thinks she’s hit the jackpot when she comes across Jennifer (Dianne Wiest), an older woman with minor health issues who has a lot of money and no relatives.

Pushing through a false dementia diagnosis, she whisks a reluctant Jennifer away from her house, takes control of her possessions (including her phone) and locks her in a care facility. There’s just one problem – Jennifer’s son is Roman Lunyov (Peter Dinklage), a reclusive but powerful gangster. Marla suddenly finds herself in too deep, but determined to outwit this new threat.

The deeply uncomfortable opening scene, where she forcibly separates one of her wards from their son via the courts, sets the tone. Pike’s narration tells us that there are no “good people”, before being accosted by the son who, in his anger, loses any moral high ground with a sexist tirade. It’s a unique experience watching a story where no one has any redeeming qualities, just varying degrees of vileness.

It’s not comfortable or thrilling to watch Marla do what she does, from hoisting perfectly healthy elders away from their homes to literally starving them into submission if they step out of line. There’s no Wolf of Wall Street-type glee watching someone be bad, because we see the victims and the abuse levied upon them.

However, while it’s not nice, it is impeccably crafted. Director J Blakeson creates a horrifyingly feasible world where the care system is populated by the greedy and apathetic, and where the good-hearted are duped with terrifying ease. He also picked the perfect lead in Pike, who has never been better. You completely despise Marla within twenty minutes, and yet at the same time are in awe of her intelligence and power. It’s difficult to take your eyes off of her as she glides into every scene with a steel glare and laser cut bob.

She has a great scene partner in Dinklage’s Roman. He appears just as you’re recovering from Marla’s cruelty, with the hope that he is a White Knight here to bring justice. As he starts to berate minions and peruse his human trafficking victims, however, your heart sinks as you realise he is simply another villain. The scenes between the pair are terrific, even if the plot starts to unravel as their feud rolls on.

Those two would be enough on their own, but there are fine supporting performances all round. Chris Messina is delightfully sleazy as Roman’s lawyer, Eiza González is ice cold as Maria’s right-hand woman, and Isiah Whitlock Jr is great as the judge who falls for Maria’s schemes every time. Top of the pack is Wiest, living out the nightmare of old age before cracking an evil grin when she realises her mob cavalry are en route.

A scathing critique of a ruthless system, I Care A Lot is too cold blooded to worm its way into your affections and loses its way in the final act. Nevertheless, thanks to a stellar lead it’s a bleak treat for those who love to revel in darkness.

I Care A Lot is available on Amazon Prime Video from 19th February.