Stick with HS2 or scrap it? Where every Tory leadership contender stands on the £56bn railway 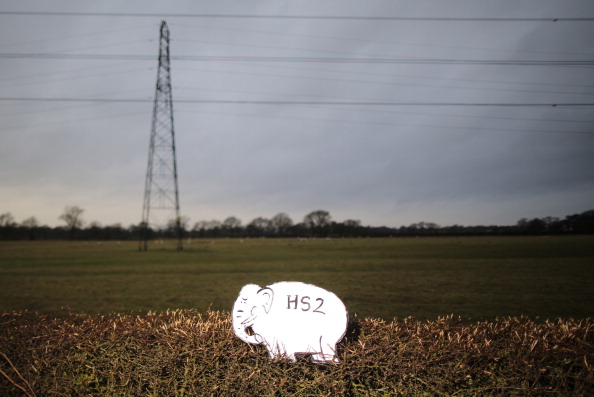 Theresa May has just days left as Tory leader, and it’s not just Brexit where the future is unclear – HS2 is also at a crossroads.

Much of the talk around May’s potential successors has been centred on their stance on a no-deal Brexit.

But in the transport world, all minds are focused on whether a new leader will stick with the high-speed rail link,or scrap the £56bn project.

HS2 is a proposed rail link that will connect London to the West Midlands in the first stage, followed by a second stage that will link Birmingham to Manchester and Leeds.

Those in favour of HS2 say it will create jobs, increase capacity on Britain’s creaking railways, and boost the economy.

Those against have denounced it as a white elephant and say the money could be better used in improving local rail links in the north.

There has always been scepticism around HS2, but doubts have been dialled up following concerns the project is way over its budget and may not be delivered in the manner it was conceived.

It is also becoming increasingly clear that its future depends on who will soon enter Downing Street.

As the campaign heats up, it is not a question its contenders can afford to ignore.

Here, City A.M. offers an insight into where those jostling to replace May stand on the UK’s most controversial transport project in decades.

Odds on who our next Prime Minister will be come from Paddy Power Betfair.

The former London mayor and man to beat in the Tory leadership contest has called for the high speed rail project to be put on hold.

It would run through his constituency of Uxbridge and South Ruislip.

Johnson has said he would prefer a trans-Pennine high-speed rail link.

The former foreign secretary told the Sunday Times last year: “There are projects we should have on transport in the north of the country that ought to take precedence over HS2. It’s crazy how long it takes to get east–west across the country.”

According to They Work for You, which contains the voting records of MPs, Johnson has never voted on new high speed rail infrastructure.

Environment secretary and Brexiter Michael Gove is seen as the man to vote for by Tory MPs who want to stop Boris taking the Tory crown.

The MP for Surrey Heath has consistently voted for HS2 infrastructure but is said to be privately sceptical about the project, due to the environmental impact of the north-south rail link.

He is also said to have suggested the money could be better spent on local transport links.

The Sunday Times reported last year that Gove had privately raised among MPs the suggestion that the rail link should be scrapped. HS2 will not pass directly through Gove’s constituency.

The foreign secretary is one of the staunchest supporters of HS2 in the Cabinet. Late last month he tweeted that the project was “absolutely vital”.

“Post Brexit we must be ambitious for our country and hungry for our economy.,” he said.

“What signal would it send if we cancelled our highest profile infrastructure project and weakened our commitment to share prosperity around the country?”

But a preview of his leaked manifesto suggests he is cautious about HS2, though isn’t looking at an outright cancellation.

Raab said if elected leader he will look into the “cost effectiveness” of HS2 during the Spending Review later this year.

His aim would be to reduce costs to “maximise value for money”.

Asked at a panel event organised by the Daily Telegraph – where he appeared alongside health secretary Matt Hancock, Tory MP Victoria Atkins and chief secretary to the Treasury Liz Truss – whether he would scrap the rail project, Raab replied: “I’m not sure yet.”

Sajid Javid, the home secretary, confirmed his support for the new rail link in an interview with the BBC this week.

When asked whether he would continue with the project if Prime Minister, Javid replied: “Yes.”

Last year, Javid fired a broadside at rival Johnson when he poured cold water over HS2.

“Boris is not a member of the government. The government is absolutely behind HS2. A huge amount of effort and investment has already gone into that,” he said at the time.

His continued support for the railway comes despite his proposal for a £100bn national infrastructure fund, which would be used to boost rail links and infrastructure in the north.

Health secretary Matt Hancock, a Remainer in the Cabinet, recently said in an interview with the FT that he was “very strongly” in favour of HS2, saying the UK needed “more transport investment, not less”.

He added that the Northern Powerhouse project, which will devolve power and spending outside of London, needed “rocket boosters”.

However, Hancock is also sympathetic to the argument that HS2 might not solve the problem of poor east-west transport links in the north.

At a recent event organised by the Daily Telegraph, Hancock backed HS2 but said: “We should invest in other transport links, east to west.”

Esther McVey, who resigned as work and pensions secretary over Brexit earlier this year, has hinted she could ditch the high-speed rail link.

The railway will run through her constituency of Tatton, Cheshire.

In April she tweeted that HS2 needed a “rethink”.

“What the vast majority of the public want is a fast rail link connecting all the cities across the north of England as well as better local transport, not a vanity project whose cost keeps increasing,” she said.

A recent entrant to the Tory leadership race, Mark Harper’s views on HS2 are less well known. The former chief whip has voted for the high-speed infrastructure in the past.

Former leader of the House of Commons, Andrea Leadsom, is opposed to the scheme.

Leadsom has told the BBC that HS2 was in need of an “urgent review” and that she wanted to look at the project again to ensure it offered taxpayers “value for money”.

Earlier in the year she questioned whether there was still a “business case” for HS2, after hearing reports that the speed of trains could be lowered to reduce costs.

In a letter to HS2 chief executive Mark Thurston, Leadsom wrote: “Given the business case for HS2 was first predicated upon speed, then on capacity then finally on improving connectivity with the north, can I ask how these changes – separately and cumulatively – would impact on the viability of the project?

“My constituents are naturally concerned that changes to the project could undermine the business case, negatively affect the benefit-cost ratio, and reduce the value for taxpayers’ money.”

Rory Stewart, the former prisons minister and current international development secretary, recently said in an interview with the Spectator that he was “sceptical” about the high-speed rail link.

But he holds that view even though his constituency of Penrith and theBorder could benefit from it.

Stewart has voted in favour of the high-speed rail link in parliament. But he has sought assurances that the project’s construction would not disrupt his constituents’ journeys into London.

Read more: Is it time to cut our losses and kill off HS2?

Former universities minister Sam Gyimah became the 13th Tory to throw their hat in the ring to replace May over the weekend.

Gyimah has made few public comments about the project, but has consistently voted for it in parliament.