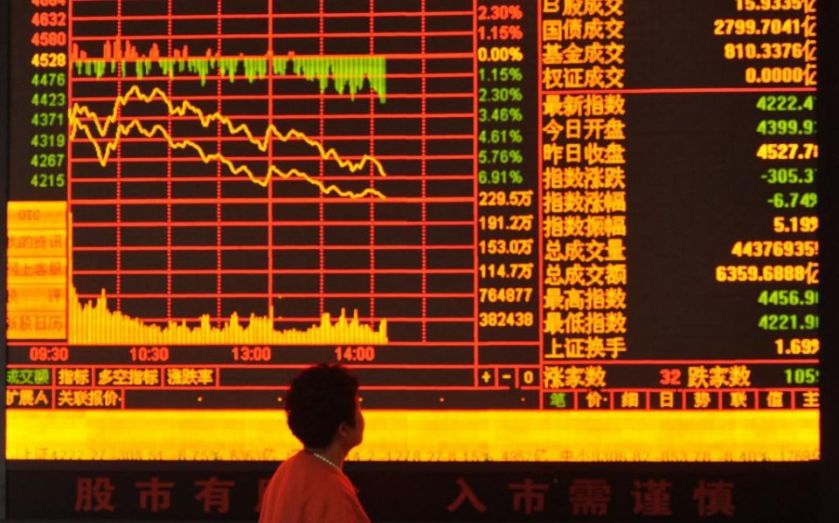 Aftershocks from Monday’s chaos rippled through global markets yesterday, with shares bouncing back in parts of the west and China providing a shot in the arm for its battered trading floors and wavering economy.
Following the worst worldwide stock market rout in years, the FTSE came out fighting and recorded its biggest one-day rise since 2011.
The German Dax and French Cac made gains in excess of four per cent.
Yet volatility continued to trouble investors, with shares in the US closing down on the day despite sharp gains in early trading.
Meanwhile the People’s Bank of China cut its main lending rate for the fifth time in a year to 4.6 per cent, shaving off 0.25 percentage points. In a bid to stimulate its economy and encourage lending, it also reduced the amount of cash banks have to hold in reserve.
Read more: Tech stocks rebound on Nasdaq – Netflix, Facebook, Amazon and Apple share prices are on the up
The move came after Chinese stocks plummeted a further 7.6 per cent, having dived by nearly nine per cent on Monday. Shares in Shanghai have lost a quarter of their value in little over a week.
Worsening conditions in China, the world’s second largest economy, are leading analysts to peg back their predictions for interest rate rises in the UK and US.
The Federal Reserve and Bank of England were expected to lift rates in September and early-2016 respectively, but any such predictions have been dramatically diluted in recent days and weeks.
Financial markets in the UK are now viewing August next year as the most likely time for the Bank’s first rate hike, according to the prices of forward-looking contracts. They were previously betting on some time around May.
Deutsche Bank’s George Buckley told City A.M. the three-month shift in expectations occurred “over the last week or so, since market volatility and concern over China set in”.
“The drop in commodity prices [prompted by lower Chinese demand] will push down on UK inflation,” added Martin Beck from Oxford Economics. The London-based consultancy has moved its prediction for the first rate rise to May, back from the first three months of 2016.
Read more: Money has poured into Japan as Asian markets crumble over China woes
Caution is growing. Economist Michael Saunders at Citi still expects a 2016 rate hike, but warned: “With the worsening outlook for global growth and the slide in equities, in our view it is now questionable as to whether the MPC will hike rates at all next year.”
Economists at Barclays have sent their US rate rise forecast into 2016. And Ray Dalio, founder of the world’s biggest hedge fund Bridgewater Associates, said in a note to clients this week that the “next big Fed move will be to ease (via quantitative easing) rather than to tighten”.
Former US Treasury secretary Larry Summers tweeted on Monday: “It is far from clear that the next Fed move will be a tightening.”