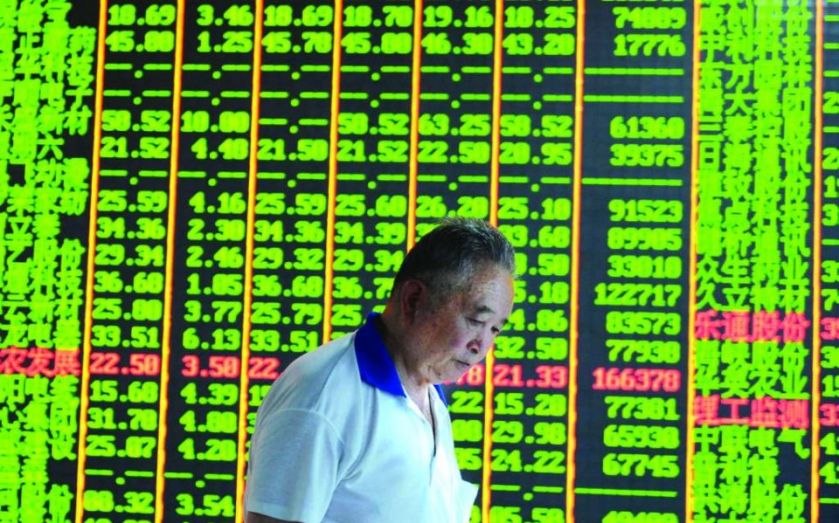 China's stock markets are in the midst of a crash, and with panic spreading, authorities have stepped in with drastic measures to prevent a looming disaster.
Over the last 12 months the Shanghai Composite soared 180 per cent in a spectacular bull run which came to an abrupt end mid June. Since then, the market has slumped 34 per cent, including an eight per cent fall on Wednesday alone, which analysts dubbed “Black Wednesday”.
A decline of 20 per cent is classed as a bear market, so this near-doubling has caused chaos as investors rush to limit their losses and sell out of shares before prices fall even further.

In a bid to calm the market, measures to prevent selling and encourage buying have been put in place. Chinese authorities have banned anyone holding five per cent of a company’s stock from selling out for the next six months, an extraordinary rule which illustrates how desperate the situation has become.
Meanwhile, nearly 50 per cent of companies listed on the country’s main stock exchanges – or around 1,250 companies – have suspended trading in their shares, which means no-one can buy or sell their stock. In developed market terms, suspending shares is an unusual move that would only be taken in exceptional circumstances, but it has been adopted en masse in China. Although ostensibly a way to prevent selling, this is more likely to have the effect of stagnating the market for a time. At least $2.2 trillion (£1.43 trillion) of shares are now in lock-down, according to Bloomberg data. It remains to be seen what will happen when trading re-commences.

With people rushing to sell, there has been a shortage of buyers and authorities have promised they will find a way to free up liquidity. Rules allowing stockbrokers to loan people money to buy stocks have been relaxed.
This practice is known as “margin lending” and is one of the big factors that helped fuel the stock price boom. When markets were rising ever upwards, investors profited handsomely for buying shares with borrowed money, and estimates suggest stockbrokers had a massive $366bn in outstanding margin trades last month.
“We think the boom and bust in the last four months were mostly due to marginal purchases done on leverage…until the margin buyers are gone, we don’t expect stabilisation or the possibility for the market to start heading higher again,” says Sean Yokota of SEB.

Meanwhile, police are reportedly beginning investigations into “vicious” short selling – a practice where investors bet share prices will fall, and profit from it. Although short selling stocks is not illegal, local media has reported police as saying they intend to crack down in a “heavy handed manner” on anyone going against the spirit of the rules.

As these measures have been introduced, the Shanghai Composite has swung wildly, in moves reminiscent of when the last stock market bubble burst in 2008. Whether the authorities are successful in stemming the sell-off will be seen over the next week, although so far the market is still down over 30 per cent from its 12 June peak.
In the meantime, China’s authorities are coming in for criticism over the introduction of these tough and wide-ranging stock market rules. “Policy response on the whole has been disappointing and in many ways runs contrary to the spirit of broader reforms and general market liberalisation,” says Dale Nicholls, manager of the Fidelity China Special Situations trust.
There are now deep divisions between international investors over the worthiness of Chinese stock markets. Some believe these latest price falls illustrate how China’s stock markets are an unsound and unreliable place, prone to distortion and artificial manipulation. Others think it’s the furore that has got out of hand – not the stock markets – and that this sell-off is creating opportunities to buy into stocks at fairer prices.

But ultimately, the fate of China’s stock markets rests in the hands of its people. International investors only own around 1 per cent of Chinese equities.
Unlike in the West, where most stock market investing is left to the professionals, China is home to an army of “mom and pop” investors; ordinary people who have set up online accounts to dabble in the trading. 80 per cent of investment in the stock market is retail investors, rather than big institutions, and there are now 90m individual investment accounts in China, and which stocks to buy and sell is a popular topic of conversation.
The wealth effect ordinary people will have felt from their speculations on the market in the last year would have given a great psychological boost to a society grappling with a slowing economy, a mountain of debt and an out of control property market.
Now, the impact of the falling stock market could be felt in the wider economy through lower consumption, according to Laura Luo from Baring Asset Management, as losses on the stock market will make people hesitant to spend. It could also be a hindrance to reaching GDP growth targets this year.
“The slumping stock market presents a real risk to the attempts to rebalance the economy, and a genuine hurdle to hitting the seven per cent growth target for this year, as increasing government intervention reflects,” says Craig Botham at Schroders.